Cardston, Alberta--(Newsfile Corp. - August 12, 2019) - American Creek Resources Ltd. (TSXV: AMK) ("the Company") is pleased to announce that a drill has been mobilized to the Dunwell Mine project and drilling has now commenced. As part of an overall exploration program it is anticipated that Phase I will include up to 2,000 meters of drilling on several targets.

The 100% owned Dunwell Mine project is located in the heart of the Golden Triangle a few kilometers outside of Stewart, BC.

Darren Blaney, CEO and President stated: "We are very excited to begin drilling on this project. We have had our eye on this property since 2006 and now we finally get to start showing the market what we have. The Dunwell is an incredibly prospective property and has everything going for it from amazing access and logistics to multiple areas with past high grade production. All indications are that these multiple bonanza grade vein systems found scattered over several kilometers around the Dunwell mine itself are all related and form part of a much larger system underlying the property."

Through a series of strategic acquisitions American Creek was able to purchase the past producing Dunwell Mine as well as several adjoining very prospective properties, combining them into one large land package that encompasses the best gold and silver mineral occurrences and historic workings in the Bear River valley. The amalgamated property spans 1,655 hectares covering the northern portion of the Portland Canal Fissure Zone, an area first prospected in the late 1800's and hosting some of the earliest producing gold and silver mines in the Stewart area.

The property is located 8 km northeast of Stewart with a road right to the mine site and a major highway and power line also running through the property. The Dunwell Mine adit itself is located only 2 km from Highway 37A and the power transmission line. Stewart hosts a deep sea port including modern ore loading and shipping facilities.

Unlike the majority of mineral properties located near Stewart and within the Golden Triangle, the Dunwell is relatively moderate and at low elevation (600m and lower). These features allow for year-round work which typically isn't the case for exploration programs conducted in the Stewart region where projects are typically at higher altitude in very rugged terrain, are accessible only by helicopter, and lack critical infrastructure such as roads and power. The Dunwell project may just have the best logistics of any project in the Golden Triangle.

Although there has been a substantive amount of small-scale historic work (pre-1940) in this area given its close proximity to Stewart, very fractured ownership of individual mineral claims greatly hampered meaningful larger scale exploration resulting in very little modern exploration being conducted on the property or in the immediate region.

Strong potential exists to develop more reserves along strike with the present workings and at depth below the No. 4 level. A drill program conducted by prior owners in 2010 revealed a zone at least 300 metres long and 200 metres along dip with a true thickness of 6-7 meters, suggesting an extension of the ore body vein system previously mined. Eight holes drilled 150 meters underneath and to the north of the old underground workings resulted in the discovery of a wide quartz breccia zone with strong sphalerite, galena, pyrite and chalcopyrite. Due to unfavorable market conditions at the time, the work was never followed up on. Significant reported results from the 2010 drilling are displayed in the table below:

The 2019 Phase I drill program is designed to confirm the promising results from the 2010 drilling and also to expand the known extent of the vein system with step out holes. Drill hole D4-2010-09 returned an impressive 14.27 g/t gold over 6.7 meters and along with similar results in adjacent holes, partially delineated a new high-grade vein system. The first hole to be drilled in the 2019 program will be located in close proximity to D4-2010-09. A series of holes will then be drilled to extend the known extent of this new vein system.

James McCrea, P. Geo for the Dunwell project, commented: "The historic Dunwell Mine workings straddle a large shear zone that is interpreted to be part of the Portland Canal Fissure Zone. The shear has a surface expression of up to 3 km with a series of known vein showings, along the shear, north and south of the Dunwell, that have an extent of 2 km. The potential for further discoveries exists adjacent to the shear in the area of the Dunwell Mine."

In addition to the past producing Dunwell Mine itself, the property package also contains other high-grade gold and silver occurrences and historic small-scale gold/silver high-grading operations along a several kilometer north/south trend that correlates to the fissure zone and major faulting. A search of old reports produced an impressive number of such occurrences on the property. The reported grades are even more impressive. Some of these include the following: 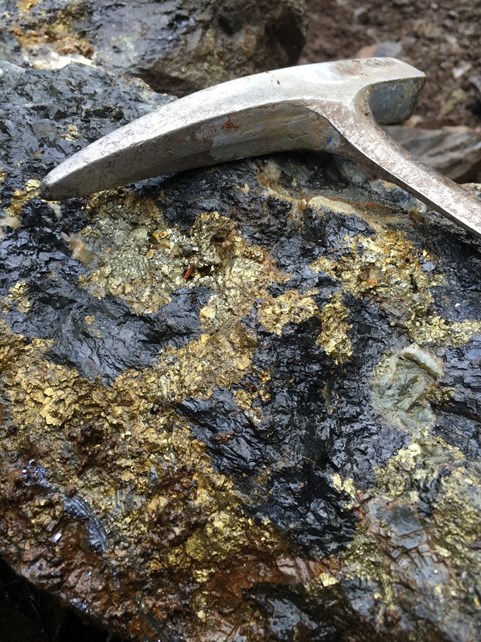 For a summary about the Dunwell Mine project please click here: Dunwell Summary

The Qualified Person directing the Dunwell exploration program is James A. McCrea, P. Geo., for the purposes of National Instrument 43-101. He has read and approved the scientific and technical information that forms the basis for the disclosure contained in this news release.

In addition to the 100% owned Dunwell project, the portfolio includes two other gold/silver projects located in the heart of the Golden Triangle; the Treaty Creek and Electrum joint ventures with Walter Storm/Tudor Gold.

A major drill program is presently being conducted at Treaty Creek by JV partner and operator Tudor Gold. There are now two drills working on the Goldstorm zone with the objective of defining a significant maiden gold resource. The last hole reported included a 780 meter intercept of 0.683 g/t gold including a higher grade upper portion of 1.095 g/t over 370.5 meters.

Other properties held throughout BC include the Gold Hill, Austruck-Bonanza, Ample Goldmax, Silver Side, and Glitter King.

This news release contains forward-looking statements. These statements are based on current expectations and assumptions that are subject to risks and uncertainties. Readers should not place undue importance on forward-looking information and should not rely upon this information as of any other date. Actual results could differ materially because of factors discussed in the Company's management discussion and analysis filed with applicable Canadian securities regulators, which can be found under the Company's profile on www.sedar.com. The Company does not assume any obligation to update any forward-looking statements.

To view the source version of this press release, please visit https://www.newsfilecorp.com/release/46848