The geophysical contractor, CGG, will cover 430 square kilometres (4,300 line km) at a 100m line spacing with a helicopter-borne magnetometer stinger survey for high-resolution information that will aid in targeting the sedimentary layers hosting copper. Investigations completed in the 2018 drill program by Forum suggests that the higher grades of copper are associated with magnetite and mafic-rich layers in the strata. The airborne survey will return high-resolution magnetic signature imagery of the rocks over the entire 52 km length of the copper-bearing sedimentary basin (Figure 1). The interpretation of the magnetic data will be utilized to identify new drill targets.

Copper is hosted in multiple, shallow-dipping layers of stratabound chalcocite mineralization with late stage native copper mineralization as determined by earlier drilling and petrographic work completed by Forum. In addition, mapping by the Saskatchewan Geological Survey has determined that the copper bearing strata have been repeated by faulting, adding to the potential of the property. These positive geological attributes confirm the exploration potential for finding a large tonnage open pit deposit.

Details of the exploration agreement with Rio Tinto can be read in the Forum news release of May 9, 2019.

Ken Wheatley, P.Geo. and Forum's VP, Exploration and Qualified Person under National Instrument 43-101, has reviewed and approved the contents of this news release. 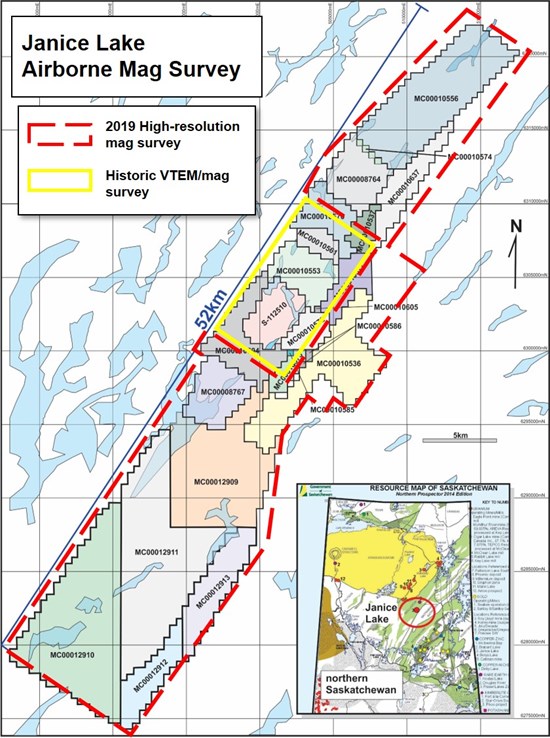 Figure 1: Outline of the Airborne Magnetic Survey over Claim Map. The red dashed line shows the area of the survey. The yellow area has already been covered by a recent electromagnetic/magnetic survey and is the only part of the project that has been drilled in the past. The remainder of the project has not been drill tested.

To view the source version of this press release, please visit https://www.newsfilecorp.com/release/46296