Calgary, Alberta--(Newsfile Corp. - November 29, 2018) - Divestco Inc. (TSXV: DVT) ("Divestco" or the "Company"), an exploration services company dedicated to providing a comprehensive and integrated portfolio of data, software and services to the oil and gas industry worldwide, today announced its financial and operating results for the three and nine months ended September 30, 2018. 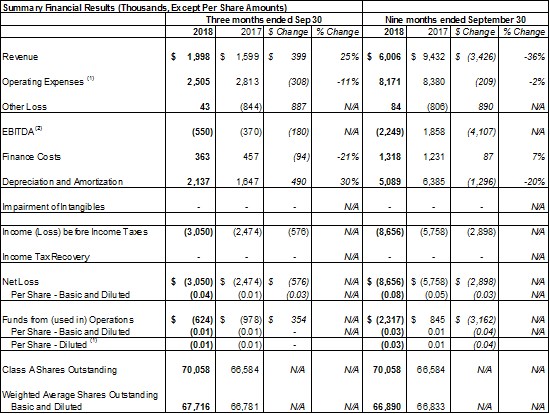 (1) Includes salaries & benefits, general & administrative expenses and share-based payments but excludes depreciation and amortization and other losses (income).
(2) See the "Non-GAAP Measures" section of the Company's Management Discussion and Analysis filed on the Company's website and on SEDAR.

As at September 30, 2018, Divestco had an adjusted working capital deficiency of $6.4 million (December 31, 2017: $3.7 million deficiency). The increase in the adjusted working capital deficit from the end of 2017 was due to the reclassification of Divestco's $3 million senior loan from long-term debt to current liabilities. In April 2018, this senior loan was repaid and replaced with a long-term non-revolving bond facility that matures in the fall of 2020. During the quarter ended, Divestco received funds for senior loans in the amount of $2.05 million in aggregate, of which $1.4 million was advanced in July 2018 and $ 0.7 million was advanced in September 2018 (see "Senior Loan" under the "Capital Resources" section to this MD&A for further discussion).

(1)See the "Non-GAAP Measures" section of the Company's Management Discussion and Analysis filed on the Company's website and on SEDAR.

As a result of the continued transportation issues impacting our Western Canadian oil resources, Divestco continues to suffer from the recession facing the Canadian resource industry. This has led to continued delays in both capital expenditure commitments and to projects where customers need our data and services.

Fortunately, Divestco's Processing division has invested heavily in international markets where none of Canada's issues exist and these areas are now showing significant growth. In fact, the Company's awarded international contracts have now reached record levels and it anticipates continued growth and expansion over at least the next two years.

Furthermore, Divestco remains on track with its cryptocurrency operations, having successfully deployed a mobile mining system into the field in a behind-the-grid energy project just north of Calgary. This project is proving to be economical and provides Divestco the latitude to significantly scale up the operation. Divestco is currently generating power for approximately $0.03/kwh, which is about ¼ of the cost of purchasing power from the grid. Construction of Divestco's Wildwood 3.5MW cogeneration project remains on track and the Company's first commercial power sale into the Alberta energy grid is anticipated to occur in the third quarter 2019. As well, because of Divestco's successful mining test project, the Company has been approached by several oil and gas companies to form joint ventures and run cogeneration and cryptocurrency mining projects.

Divestco also continues to advance its blockchain scoping project in the seismic industry and has now submitted requests for several research and development government grants that would provide partial funding for this initiative.

The coming two quarters are showing some potential areas of renewed growth in Western Canada, but it is unclear if any of that growth will materialize in a timely fashion. A significant backlog of Divestco's data and products exists; it is just a question of when the oil and gas industry feels confident enough to commit to spending on their assets. The Western Canadian industry needs political stability and commitment from both our federal and provincial governments in order to feel confident committing capital to the sector. Divestco remains optimistic that our governments will start to address the needs of the Canadian Oil and Gas industry while there is still a chance to save it.

Divestco is a geoscience services company that provides a comprehensive and integrated portfolio of data, software, and services to the oil and gas industry. Through continued commitment to align and bundle products and services to generate value for customers, Divestco is creating an unparalleled set of integrated solutions and unique benefits for the marketplace.

Divestco's breadth of data, software and services offers customers the ability to access and analyze the information required to make business decisions and to optimize their success in the upstream oil and gas industry. Divestco is headquartered in Calgary, Alberta, Canada and trades on the TSX Venture Exchange under the symbol "DVT".

Additional information on the Company is available on its website at Divestco.com and on SEDAR at sedar.com.

In particular, this press release contains forward-looking statements pertaining to the following: relative future competitive position of the Company; nature and timing of growth; funding requirements in respect of the cogeneration project; anticipated timing in respect of first commercial power sale into the Alberta energy grid; impact of Canadian federal and provincial governmental regulation in respect of the Company; ability to scale the cryptocurrency mining operation; impact of foreign government regulations in international jurisdictions where the Company operates; expected levels of operating costs, finance costs and other costs and expenses; the Company's plans in respect of pursuing new revenue streams within existing operations and new lines of business, such as crypto currency mining and block chain; the Company's belief that government grants could provide partial funding for the blockchain scoping project; the Company's belief that political stability will result in paying projects; anticipated renewed growth in Oil and Gas industry in the next two quarters; and Divestco's belief that governments will address the needs of the Canadian oil and gas industry.

These forward-looking statements are based upon assumptions including: future prices for crude oil and natural gas; future interest rates and future availability of debt and equity financing will be at levels and costs that allow the Company to manage, operate and finance its business and develop its software products and various oil and gas datasets including its seismic data library, and meet its future obligations; the regulatory framework in respect of royalties, taxes and environmental matters applicable to the Company and its customers will not become so onerous on both the Company and its customers as to preclude the Company and its customers from viably managing, operating and financing its business and the development of its software and data; the Company will continue to be able to identify, attract and employ qualified staff and obtain the outside expertise as well as specialized and other equipment it requires to manage, operate and finance its business and develop its properties; and that customers of the Company will pay for all services when due and in full.

These forward-looking statements are subject to numerous risks and uncertainties, certain of which are beyond the Company's control, including: general economic, market and business conditions; increased debt levels or changes to its debt service requirements; limited or no access to senior debt, subordinated debt, or to debt and / or equity capital markets; volatility in market prices for crude oil and natural gas; low exploration activity levels in the Western Canadian basin; ability of Divestco's clients to explore for, develop and produce oil and gas; transportation issued not being solved for Western Canadian oil and gas producers; ability of the Company's clients to pay in a timely manner; fluctuations in the value of various crypto currencies; fluctuations in interest rates; demand for the Company's product and services; weather and climate conditions which cause seasonal cyclicality in our business; detrimental actions by other competitors; availability of skilled labor; inability to obtain insurance for some or all of the Company's crypto currency mining operations; ability to obtain regulatory approvals in a timely manner; adverse conditions in the debt and equity markets; security breach in the Company's information technology systems; and government actions including changes in environmental and other regulation.

Sign up to receive news releases by email for Divestco Inc. or all companies belonging to the Oil & Gas, Construction/Building industries.