Michael G. Allen, President and CEO, stated, "We acquired the Sterling Mine last year as we believed it was a 'best-in-class' asset in terms of jurisdiction, relative grade, permitted status and metallurgical recoveries. Our expectations of Sterling have been exceeded, and with the work completed to date, we feel we have not only confirmed exceptional grades and recoveries, but also discovered several previously unrecognized zones of gold mineralization. These new zones are near the existing permitted pit, as well as within a close range of the permitted facilities. With the recent acquisition of the Goldspar Mine located only 600 meters away, we see significant potential for the Sterling Mine to increase fundamental value in the Company."

The Company submitted composites from five core holes to Kappes Cassiday and Associates in Reno for 96-hour bottle roll tests. Results received indicate that, as expected, mineralization from the Sterling Mine showed an excellent response to cyanide, with recoveries ranging between 86% and 93%. Also consistent with what is known of the Sterling mineralization is that most of the gold is recovered quickly. In the case of the bottle rolls, most of the gold was recovered in the first two hours of the test.

Previous operators of the Sterling Mine recovered approximately 195,000 oz of gold from 856,000 tonnes stacked with an average grade of 7.44 g/t Au, indicating a very high recovery from what was a run-of-mine (no crushing) heap-leach operation.

The Company completed 16 drill holes into a gap in the modelled Sterling Mine resource, where widely spaced drilling had previously intercepted anomalous gold. The drill holes were all collared in waste rock discards from the previous underground operations. Fill material encountered in all 16 holes returned gold grades that are potentially economic. Historically, the Sterling Mine operated with a 3.5 g/t Au cut-off to the leach pad and lower grade material was stockpiled in various waste piles, with this being one of them. 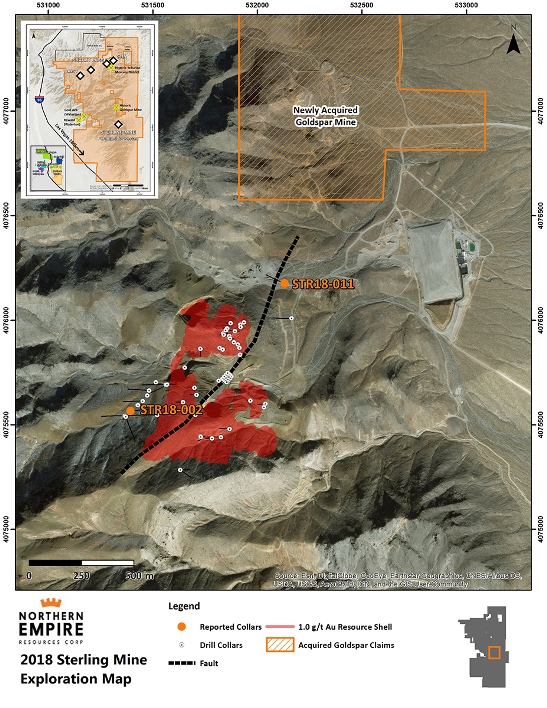 Reported drilling from the Connector zone returned an average cyanide soluble grade of 0.6 g/t Au. In addition to the waste material results reported above, encouraging hard rock intervals were encountered in several holes.

The Company drilled a total of 11 additional reverse circulation holes around the Sterling Resource to test for possible extensions. Nine holes were drilled to the west of the mineralization, and all hit the target structure. A significant intercept was encountered in STR18-002 as reported below. In addition, 2 holes were drilled to test for extensions of a possible "root structure," extending through the Connector Zone and beyond the known mineralization toward the recently acquired Goldspar Mine. A significant intercept was encountered in STR18-011.

Today's results highlight three new opportunities for resource expansion at the Sterling mine, which include: Connector Zone, including the waste rock piles; near-pit resource expansion; and new exploration target upside. The Company intends to explore all these options as we continue to evaluate and optimize the Sterling Mine.

About the Sterling Mine

Northern Empire Resources Corp. (TSXV: NM) (OTC Pink: PSPGF) is expanding and discovering heap leach gold deposits in Nevada. The Company presently has initial resource statements on four potentially heap-leachable deposits, three of which are past producing, at the 100%-owned Sterling Gold Project. This includes the high-grade, fully permitted Sterling Mine (231,000oz at 3.67g/t Au) which was in continuous production between 1980 and 2015 as a heap leach operation. The global, pit-constrained resource for the entire project is 924,000oz at 1.28 g/t gold (cut-off varies by deposit).

The Company is well-financed and is aggressively drilling all four deposits in 2018 to increase resources and explore for new discoveries on the district-scale land package. Founders and management have a track record of increasing shareholder value through discovery, project development and M&A with successes that include Newmarket Gold, Kaminak Gold, Underworld Resources and International Royalty Corp. For further information on the Sterling Project, please refer to the technical report on the Sterling Project dated July 12, 2017, found on the Company's website (www.northernemp.com) and SEDAR.

Samples were submitted to ALS Global in Reno, Nevada. Gold grade was determined by Fire Assay with Atomic Absorption, and Gravimetric Finish, as well as Cyanide Soluble methods. Most ALS geochemical laboratories are registered or are pending registration to ISO 9001:2008, and several analytical facilities have received ISO 17025 accreditations for specific laboratory procedures. Northern Empire inserts a series of standards, blanks and field duplicates into the sample stream as part of its quality assurance and quality control procedures which are continually monitored by the Company.

ON BEHALF OF THE BOARD OF NORTHERN EMPIRE RESOURCES CORP.
"Michael G. Allen"

Sign up to receive news releases by email for Northern Empire Resources Corp. or all companies belonging to the Mining and Metals, Precious Metals industries.