Vancouver, British Columbia--(Newsfile Corp. - December 7, 2022) - Blackrock Silver Corp. (TSXV: BRC) (the "Company" or "Blackrock") is pleased to announce the results of its recently completed diamond exploration drill program on its 100% controlled Silver Cloud project situated 20 kilometres south of the Midas mine and 3 kilometres west of Hollister mine, along the prolific Northern Nevada Rift in north-central Nevada.

The Company completed three diamond core holes, SBC22-019, -020, AND -021, totalling 1,447 metres (4,746 ft) in two target areas on the Silver Cloud project. Two holes totalling 927 metres were completed adjacent to the Silver Cloud mine and one hole, 520 metres, was drilled at Northwest Canyon.

Andrew Pollard, Blackrock President and CEO, commented, "Silver Cloud was the project Blackrock was built around in its current form beginning three years ago, and though our Tonopah West property has now become a globally significant silver discovery, it's Silver Cloud that has returned our highest-grade gold intercept as a Company to date, in the process, establishing a new bona fide high-grade discovery on one of the most prolific gold belts in Nevada. Our understanding of the rich ore deposits along the Northern Nevada Rift were key to making the Zeus discovery. The Midas mine, located 20 kilometres to the north, which started with a similar intercept, ultimately lead to the discovery of the Colorado Grande and Gold Crown veins which were 0.3 to 6 metres wide, yet managed to form the basis for one of Nevada's most iconic historic gold mines. Making a blind discovery of this magnitude on such a limited round of drilling is a testament to the caliber of our geologic team. The discovery of Zeus may have just parted the Silver Clouds once and for all, with indications that the system has plenty of room to grow from here."

At the Silver Cloud mine, SBC22-019 and SBC22-021 targeted an interpreted structural zone and tested 170 metres of strike. SBC22-019 encountered a zone of pyrite-cemented breccia from 357 to 360 metres down the hole. The zone was mineralized but below the 0.3 g/t gold cut off grade. An additional three zones of gold mineralization were encountered between 219 and 267 metres down the hole. These zones range from one to three metres in thickness and have gold values from 0.377 g/t to 0.578 g/t gold. The intervals have been submitted for metallic-screen analysis.

SBC22-021 was drilled 170 metres to the SSE of SBC22-019, and it encountered oxidized breccia and fault gouge with intermittent quartz veining from 165 to 174 metres (540 to 572 ft) down the hole. The alteration suggests the drillhole penetrated the intended NNW structure which is mineralized over a thick zone and returned assays yielding 20.6 metres returning 0.438 g/t gold. The intervals have also been submitted for metallic-screen analysis.

Additional work is being planned for Northwest Canyon to follow up on the new discovery. This area has limited drilling and shows potential for a large vein-hosted deposit similar to Midas. At the Silver Cloud mine, more exploration is warranted to understand the thick zones of alteration with lower-grade gold mineralization. 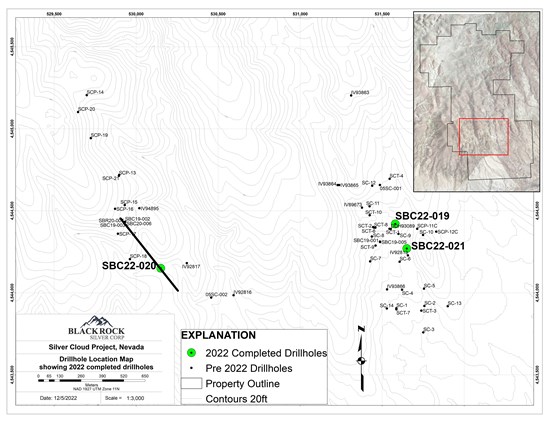 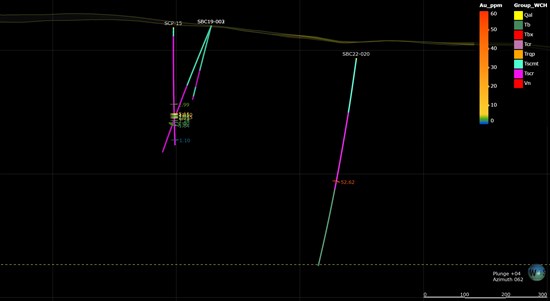 All sampling is conducted under the supervision of the Company's project geologists, and a strict chain of custody from the project to the sample preparation facility is implemented and monitored. The core samples are hauled from the project site to a secure and fenced facility in Battle Mountain, Nevada, where they are loaded on to American Assay Laboratory's (AAL) flat-bed truck and delivered to AAL's facility in Sparks, Nevada. A sample submittal sheet is delivered to AAL personnel who organize and process the sample intervals pursuant to the Company's instructions.

The core and QA/QC samples are crushed and pulverized, then the pulverized material is digested and analyzed for Au using fire assay fusion and an Induced Coupled Plasma (ICP) finish on a 30-gram assay split. Silver is determined using five-acid digestion and ICP analysis. Over limits for gold and silver are determined using a gravimetric finish. Data verification of the assay and analytical results are completed to ensure accurate and verifiable results. Blackrock personnel insert a blind prep blank, lab blank or certified reference material approximately every 15th to 20th sample. In addition, a random selection of pulps are sent to ALS Minerals in Reno, Nevada, for check assays.

Blackrock's exploration activities at the Silver Cloud, Tonopah North and Tonopah West projects are conducted and supervised by Mr. William Howald, Executive Chairman of Blackrock. Mr. William Howald, AIPG Certified Professional Geologist #11041, is a Qualified Person as defined under National Instrument 43-101. He has reviewed and approved the contents of this news release.

Forward-Looking Statements
This news release contains "forward-looking statements" within the meaning of Canadian securities legislation. Such forward-looking statements concern the Company's strategic plans, timing and expectations for the Company's exploration and drilling programs, estimates of mineralization from drilling, geological information projected from sampling results and the potential quantities and grades of the target zones. Such forward-looking statements or information are based on a number of assumptions, which may prove to be incorrect. Assumptions have been made regarding, among other things: conditions in general economic and financial markets; accuracy of assay results; geological interpretations from drilling results, timing and amount of capital expenditures; performance of available laboratory and other related services; future operating costs; and the historical basis for current estimates of potential quantities and grades of target zones. The actual results could differ materially from those anticipated in these forward-looking statements as a result of risk factors, the timing and content of work programs; results of exploration activities and development of mineral properties; the interpretation and uncertainties of drilling results and other geological data; receipt, maintenance and security of permits and mineral property titles; environmental and other regulatory risks; project costs overruns or unanticipated costs and expenses; availability of funds; failure to delineate potential quantities and grades of the target zones based on historical data, and general market and industry conditions. Forward-looking statements are based on the expectations and opinions of the Company's management on the date the statements are made. The assumptions used in the preparation of such statements, although considered reasonable at the time of preparation, may prove to be imprecise and, as such, readers are cautioned not to place undue reliance on these forward-looking statements, which speak only as of the date the statements were made. The Company undertakes no obligation to update or revise any forward-looking statements included in this news release if these beliefs, estimates and opinions or other circumstances should change, except as otherwise required by applicable law.

To view the source version of this press release, please visit https://www.newsfilecorp.com/release/147013