Toronto, Ontario--(Newsfile Corp. - November 29, 2022) - Royal Road Minerals Limited (TSXV: RYR) ("Royal Road" or the "Company") is pleased to announce that it has entered into a binding heads of agreement ("the Heads") with an individual title holder, which provides the Company with the option to acquire 100% of certain mineral rights comprising the Santo Domingo porphyry copper and gold district in San Juan Province, Argentina. 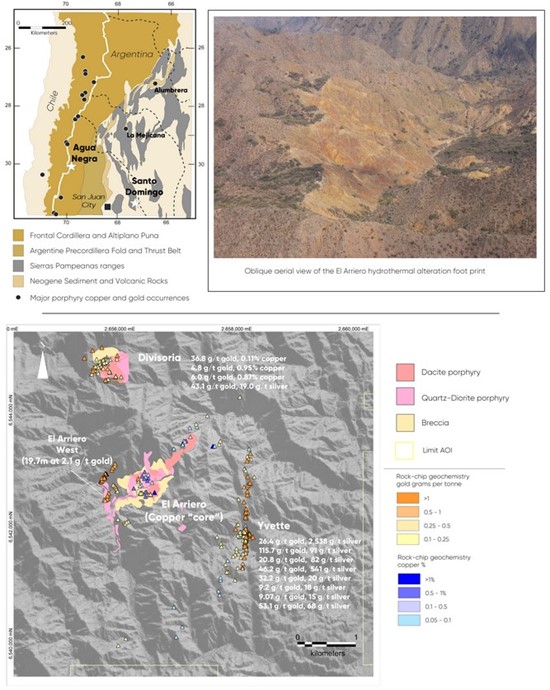 To view an enhanced version of Figure 1, please visit:
https://images.newsfilecorp.com/files/4008/145930_figure1.jpg

Significant occurrences of copper and gold were first identified in the Santo Domingo district by the title holder in 2007. During the period 2008 to 2014, Orocobre Limited and then subsequently its daughter company, Elementos Limited ("Elementos"), executed option agreements over the mineral rights package and conducted exploration work including channel and select rock chip sampling, ground magnetics, Pole-Dipole IP and Audio Magneto-Tellurics (AMT). In November 2014, Elementos announced their withdrawal from the Santo Domingo joint venture.

The porphyry-style occurrences at Santo Domingo are of a significant surface extent and show characteristic zoned porphyry-style alteration from central potassic altered cores (secondary biotite ± potassic feldspar) with quartz-magnetite-chalcopyrite veins, passing outwards to phyllic and propylitic styles of alteration. Although previous work has considered the porphyry occurrences as discrete and separate systems, rock chip geochemistry seems to show a classic zoned pattern with copper only mineralization hosted within a potassic core at El Arriero and gold (including continuous rock-chip channel samples of 19.7 meters at 2.1 grams per tonne gold at El Arriero West: See Figure 1) seemingly occurring peripheral to this core. Furthermore, topography and mapped intrusion patterns may be interpreted to imply that the area sits within the immediate roof zone to a larger and connected porphyry copper and gold system concealed at depth. Elementos concluded that the IP and AMT geophysics showed potential for deep extensions to the porphyry-style mineralization exposed on surface.

"We have been actively exploring copper and gold opportunities in Argentina for the last 12-months," said Dr Tim Coughlin, Royal Road's President and CEO. "The Santo Domingo project provides us with a new and exciting operational focus and we look forward to assessing the obvious near surface potential and to drill-testing the possibility for a significant concealed porphyry copper and gold system. San Juan province is a supportive province with recognized world-class potential and the Sierra Pampeanas terrane is relatively under-explored, despite being more accessible and less logistically onerous than the high cordillera."

The Agreement is dated 28th November 2022 and contains the following basic terms:

The information in this news release was compiled, reviewed and verified by Dr. Tim Coughlin, BSc (Geology), MSc (Exploration and Mining), PhD (Structural Geology), FAusIMM, President and CEO of Royal Road Minerals Ltd and a qualified person as defined by National Instrument 43-101.

The following information was derived from Elementos' public announcements.

To view the source version of this press release, please visit https://www.newsfilecorp.com/release/145930

Sign up to receive news releases by email for Royal Road Minerals Limited or all companies belonging to the Mining and Metals, Precious Metals industries.