Vancouver, British Columbia--(Newsfile Corp. - November 23, 2022) - Li-FT Power Ltd. (CSE: LIFT) (FSE: WS0) ("Li-FT" or the "Company") is pleased to announce that it has entered into an amalgamation agreement dated November 22, 2022 (the "Amalgamation Agreement") with 1361516 B.C. Ltd. (the "Target"), a private company holding a 100% interest in the Yellowknife Lithium Project (the "Project" or the "Properties"), whereby the Company will acquire all of the issued and outstanding shares of the Target (the "Transaction").

The Yellowknife Lithium Project is comprised of mineral leases that cover the majority of the lithium pegmatites that make up the Yellowknife Pegmatite Province ("YPP"). The YPP has been noted to be one of the largest lithium resources in the Western world (Page, 1987 - Equinox Resources). Numerous spodumene-bearing pegmatites with strike lengths up to 1,800 meters and widths up to 40 meters outcrop in a spectacular fashion within the Project and are plainly visible from satellite imagery (Figures 2, 3, & 4). A list of pegmatites and their dimensions is detailed below in Table 1. The YPP also benefits from excellent existing infrastructure, including roads, rail and a skilled labour force that could support the development of this project.

Francis MacDonald, CEO of Li-FT, comments, “The Yellowknife Lithium Project is a tremendous opportunity to consolidate numerous lithium pegmatites that have the potential to be one of the largest hard rock lithium resources in North America. The Project was held privately for 35 years without having any exploration work completed at a time when lithium was not an exciting commodity. We look forward to completing an aggressive drill program to delineate the subsurface extent of the abundant lithium mineralization we see at surface.” 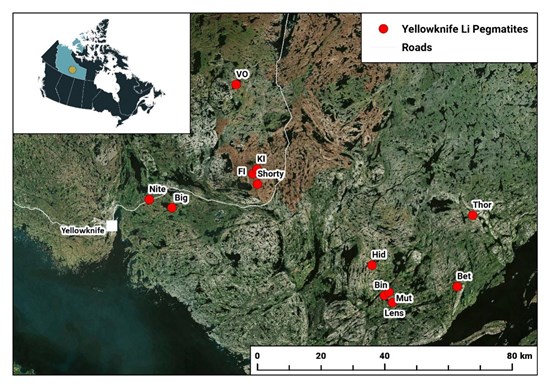 Figure 1 - Locations of the 14 lithium pegmatites within the Yellowknife Project which is located to the east of the city of Yellowknife, capital of the Northwest Territories. 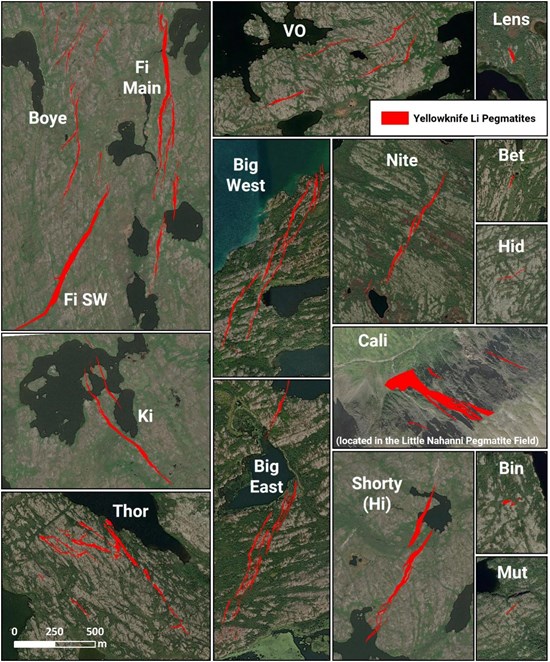 Lithium mineralization hosted in spodumene-bearing pegmatites of the Yellowknife Pegmatite Province (YPP) was first discovered in the 1940's and intermittently explored through to the 1980's. Canadian Superior Exploration Limited (CSEL), the exploration arm of Superior Oil, completed systematic mapping, spodumene crystal counts, blasting-trenching, channel sampling and diamond drilling in the area from 1975 to 1979. CSEL estimated an overall resource potential for the YPP of 49 million tons at an average grade of 1.40% Li2O1 (calculated to a vertical depth of 152m) of which 75% is located within the Yellowknife Project (Lasmanis, 1978). This estimate was not prepared in accordance with National Instrument 43-101 Standards of Disclosure for Mineral Projects ("NI 43-101") and was prepared prior to the current CIM Definition Standards for Mineral Resources and Mineral Reserves. Further, a qualified person has not done sufficient work to classify the historical estimate as current mineral resources or mineral reserves; and the Company is not treating the historical estimate as current mineral resources or mineral reserves. Additional confirmation drilling will be necessary to achieve a resource estimate which will be compliant with the requirements of NI 43-101.The historical estimate should not be relied upon and there can be no assurance that any of historical resources, in whole or in part, will ever become economically viable.

Superior Oil was acquired by Mobil in 1984 which led to the divestment of the CSEL mineral properties and the claims holding the largest lithium pegmatites were transferred to a private company owned by the Target. In 1985, the private company entered into an option agreement with Equinox Resources Ltd. who collected bulk samples in 1987 for initial metallurgical testing. The results from initial metallurgical testing were positive and Equinox recommended a full feasibility study. Equinox was later acquired by Hecla Mining Company and the YPP lithium deposits reverted back to the private company. Since 1987, very little exploration work was completed on any of the pegmatites.

In addition to the Yellowknife Project, the Target holds the Cali lease located in the Little Nahanni Pegmatite Field in the MacKenzie mountains in Northwest Territories near the Yukon border. The Little Nahanni Pegmatite Field has been noted to have greater than 275 complex rare element pegmatites over an area of 13 by 2.5 kilometers. CSEL also held the Cali pegmatite in the 1970's which subsequently was acquired during the portfolio acquisition in 1983.

The Cali pegmatite was mapped by CSEL in 1977 and was described as outcropping over a 500 meter strike length, having a 300 meter outcropping vertical extent, and having up to 100 meter width. Panels of metasedimentary country rock occur within the spodumene-bearing pegmatite which has been described to have 60 meters of pegmatite dyke material. Float mapping suggests that the lithium-bearing dyke could be up to 1,200 meters in strike length. 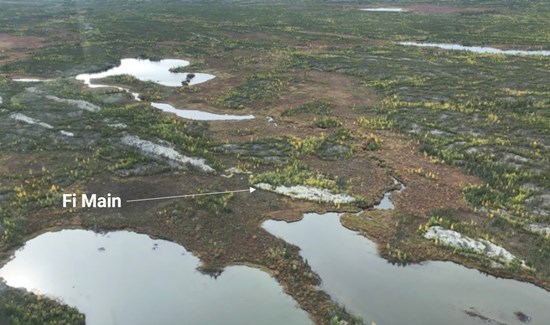 The Transaction is an arm's length transaction and will not result in a 'fundamental change', as such term is defined under the policies of the CSE, to the Company's business. Under the terms of the Amalgamation Agreement, the Transaction will be completed by way of a three-cornered amalgamation under the Business Corporations Act (British Columbia), whereby, among other things:

It is anticipated that 18 million Li-FT Shares, at a deemed price of $8.59 per share, will be issued pursuant to the Transaction based on the current capital structure of the Target. The Target is widely held with no control persons and no new insiders will be created in the Company as a result of the Transaction.

The Transaction is subject to a number of terms and conditions, including, but not limited to, receipt of third party consents of historical vendors, the approval of the shareholders of the Target, and the approval of the CSE and other applicable regulatory authorities. 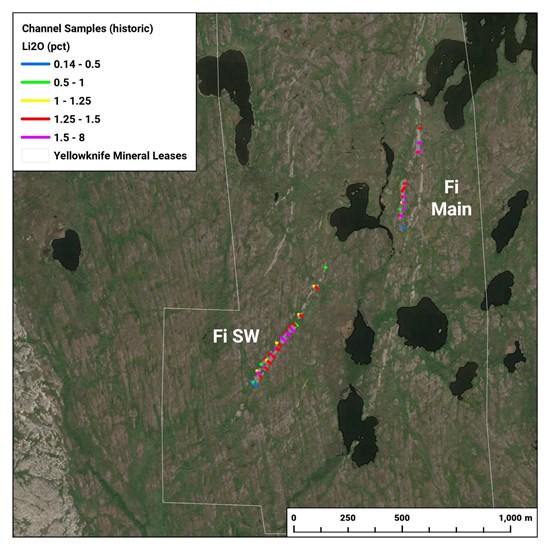 Table 1 - List of lithium pegmatites and their dimensions within the Yellowknife Project mineral leases.

Information about the Target

The Target is a private company incorporated under the laws of the Province of British Columbia holding a 100% interest in and to the 14 mineral leases comprising the Project, located in the Northwest Territories. The Project is subject to a 2% net profits royalty and an overriding 2% gross production royalty (the "GORR"). The GORR shall also apply to all after acquired mineral interests of the leaseholder in the Northwest Territories, subject to adjustment as set forth in the agreement evidencing the GORR.

Don Cummings, P.Geo (OGQ # 2183), independent consultant to Li-FT Power Ltd., Qualified Person under NI 43- 101 on standards of disclosure for mineral projects, has reviewed and approved the technical content of this release.

Li-FT is a mineral exploration company engaged in the acquisition, exploration, and development of mineral properties, specifically lithium pegmatite projects located in Canada. The Company currently controls 228,237 hectares of ground at its Rupert, Pontax, and Moyenne Projects which are prospective for hard rock lithium deposits.

Forward-looking statements are not a guarantee of future performance and involve risks, uncertainties and assumptions which are difficult to predict. Factors that could cause the actual results to differ materially from those in forward-looking statements include, among other things, the possibility that the Company is unable to obtain the necessary permits to complete its proposed drill program, that the results of the drill program may be less favorable than anticipated, the continued availability of capital and financing, and general economic, market or business conditions, including the effects of COVID-19. Forward-looking statements contained in this press release are expressly qualified by this cautionary statement. These statements should not be read as guarantees of future performance or results. Such statements involve known and unknown risks, uncertainties and other factors that may cause actual results, performance or achievements to be materially different from those implied by such statements. Although such statements are based on management's reasonable assumptions, there can be no assurance that the statements will prove to be accurate or that management's expectations or estimates of future developments, circumstances or results will materialize. The Company assumes no responsibility to update or revise forward-looking information to reflect new events or circumstances unless required by law. Readers should not place undue reliance on the Company's forward-looking statements.

Neither the Canadian Securities Exchange (the "CSE") nor its Regulation Services Provider (as that term is defined in the policies of the CSE) accepts responsibility for the adequacy or accuracy of this release.

______________________________
1Resource potential estimate is not NI 43-101 compliant. Tonnage estimate was made by projecting geologic contacts down to 500 feet (152 meters). Several of the pegmatites have been drilled down to this depth and have similar widths and grades as outcrops on surface. Estimates of grade were made by averaging channel sample results taken on surface.

To view the source version of this press release, please visit https://www.newsfilecorp.com/release/145412

Sign up to receive news releases by email for Li-FT Power Ltd. or all companies belonging to the Energy Metals, Mining and Metals, Energy industries.