These results show the Tonopah North project has significant lithium potential over a considerable area. A broad lithium zone has been intersected in all drillholes across the Tonopah North project area encompassing 5,200 acres (2,100 ha). The lithium bearing zone has an average thickness of 28.1 metres and has been drilled near the surface to a depth of 117.3 metres below the ground. Based on the drilling to date, the lithium zone is entirely within the Siebert Tuff, and has a similar profile to the lithium mineralization encountered at the TLC deposit located 3 kilometres to the northwest. The lithium bearing zone remains open in all directions.

Andrew Pollard, Blackrock's President and CEO, commented, "Results from our first pass scout drill program at our Tonopah North project have established significant lithium potential at the project with all drillholes hitting broad zones of mineralization. With grades up to 1,217 ppm lithium encountered, and thick zones of mineralization up to 56.4 metres starting near surface, initial results compare quite favourably to other well-established lithium claystone projects in the area, both directly adjacent to our project and in the nearby Clayton Valley. Blackrock's project portfolio now consists of the highest-grade undeveloped silver project in the world[1](with expansion drilling ongoing), in addition to what's emerging as a potentially significant new lithium discovery right next door. This positions Blackrock as one of the most unique companies in the emerging green metals space and provides for significant optionality for investors as both projects continue to take shape."

The Company completed approximately 9,300 metres of drilling in twenty RC drillholes. The drilling originally was to test the gold and silver potential to the west and north of the Company's silver-gold resource area located at the Tonopah West project; however, drilling of the upper geologic units was required to reach the underlying precious metal targets.

All drillholes penetrated cover rocks known to host lithium deposits in the region including the TLC deposit, which is located within five kilometres of the drilling. A significant zone of lithium-bearing material was intersected. Lithium values up to 1,217 ppm lithium within a 23-metre thick section of the Siebert Tuff was discovered. The following table summarizes the lithium values above 400 ppm received from the drill program.

TN22-007, -008 and -009 were completed in the northern portion of the claim block. TN22-007 intersected 21 metres grading 57 ppm lithium within the Siebert Tuff. TN22-008 cut a 113-metre zone of anomalous lithium bearing lithologies, but the average grade was 68 ppm lithium. TN22-007 and TN22-008 lithium results were below the 400-ppm lithium cut-off grade. At site TN22-009, anomalous Siebert Tuff was encountered and returned 56 metres grading 494 ppm lithium. A northeast oriented fault structure is postulated between TN22-008 and TN22-009 to account for the rapid increase in lithium grade. The fault could act as trapping mechanism for the lithium.

Drillholes TN22-006, -012, -13, -019 and TN22-020 were completed in the center of the project area. All had significant zones above the 400 ppm cut-off grade. TN22-012 returned the highest lithium grade of 1,217 ppm lithium. The higher grades show a northeast trend that needs additional work to understand the distribution of the high-grade lithium values encountered. 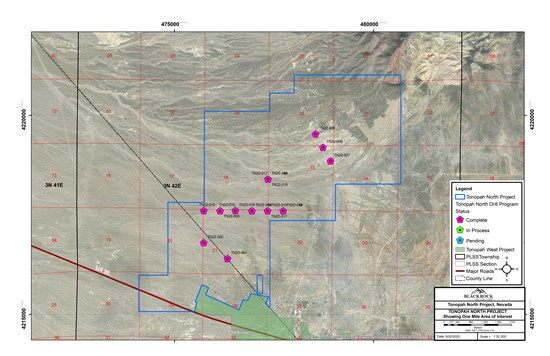 All sampling is conducted under the supervision of the Company's project geologists, and a strict chain of custody from the project to the sample preparation facility is implemented and monitored. The reverse circulation samples are hauled from the project site to a secure and fenced facility in Tonopah, Nevada, where they are loaded on to American Assay Laboratory's (AAL) flat-bed truck and delivered to AAL's facility in Sparks, Nevada. A sample submittal sheet is delivered to AAL personnel who organize and process the sample intervals pursuant to the Company's instructions.

The reverse circulation, and QA/QC samples are crushed and pulverized, then the pulverized material is digested and analyzed for Au using fire assay fusion and an Induced Coupled Plasma (ICP) finish on a 30-gram assay split. Silver is determined using five-acid digestion and ICP analysis. Over limits for gold and silver are determined using a gravimetric finish. Data verification of the assay and analytical results are completed to ensure accurate and verifiable results. Blackrock personnel insert a blind prep blank, lab blank or a certified standard approximately every 15th to 20th sample.

Blackrock's exploration activities at the Tonopah North and Tonopah West projects are conducted and supervised by Mr. William Howald, Executive Chairman of Blackrock. Mr. William Howald, AIPG Certified Professional Geologist #11041, is a Qualified Person as defined under National Instrument 43-101. He has reviewed and approved the contents of this news release.

This news release contains "forward-looking statements" within the meaning of Canadian securities legislation. Such forward-looking statements concern the Company's strategic plans, the maiden resource estimate on the Tonopah West project, timing and expectations for the Company's exploration and drilling programs, estimates of mineralization from drilling, geological information projected from sampling results and the potential quantities and grades of the target zones. Such forward-looking statements or information are based on a number of assumptions, which may prove to be incorrect. Assumptions have been made regarding, among other things: conditions in general economic and financial markets; accuracy of assay results; geological interpretations from drilling results, timing and amount of capital expenditures; performance of available laboratory and other related services; future operating costs; and the historical basis for current estimates of potential quantities and grades of target zones. The actual results could differ materially from those anticipated in these forward-looking statements as a result of risk factors, including the ability of the Company to make payments related to the lease option to purchase the Tonopah West project; the timing and content of work programs; results of exploration activities and development of mineral properties; the interpretation and uncertainties of drilling results and other geological data; receipt, maintenance and security of permits and mineral property titles; environmental and other regulatory risks; project costs overruns or unanticipated costs and expenses; availability of funds; failure to delineate potential quantities and grades of the target zones based on historical data, and general market and industry conditions. Forward-looking statements are based on the expectations and opinions of the Company's management on the date the statements are made. The assumptions used in the preparation of such statements, although considered reasonable at the time of preparation, may prove to be imprecise and, as such, readers are cautioned not to place undue reliance on these forward-looking statements, which speak only as of the date the statements were made. The Company undertakes no obligation to update or revise any forward-looking statements included in this news release if these beliefs, estimates and opinions or other circumstances should change, except as otherwise required by applicable law.

[1] Source: S&P Global; Company reports as of October 22, 2022. AgEq resources and grade reflect only silver and gold (M&I and I) resources (excludes base metals) for deposits larger than 40 million ounces AgEq.

To view the source version of this press release, please visit https://www.newsfilecorp.com/release/141700