Romios Gold Completes IP-MT Survey on Trek South Target and Reports on 2022 Exploration Programs in The Golden Triangle, BC

Toronto, Ontario--(Newsfile Corp. - September 29, 2022) - Romios Gold Resources Inc. (TSXV: RG) (OTCQB: RMIOF) (FSE: D4R) ("Romios Gold" or the "Company") is pleased to report that it has completed an extensive exploration program on six of the company's projects in the Golden Triangle of northwestern British Columbia (see Map 1). Field work by Romios' crew began in early July and continued until mid-September. Assay results are now being received and compiled, and will be reported on when complete. Field observations on some of the claim blocks are very encouraging, particularly those from the Trek South Porphyry Cu-Au-Ag prospect. Many of Romios' projects in the Golden Triangle are close to the giant Galore Creek porphyry Cu-Au-Ag project held by a Teck-Newmont JV (GCMC) and currently in the final stages of a pre-feasibility study.

Romios' VP of Exploration Mr. John Biczok, P. Geo, commented, "we are very pleased that the first ever IP-MT survey has been successfully completed on the Trek South porphyry Cu-Au-Ag prospect, and a 3D model is now being generated of this significant target. Romios' 2022 work in the Golden Triangle also resulted in the discovery of numerous, often substantial, quartz veins near historic gold showings on several properties and we look forward to receiving and evaluating those results soon."

Stephen Burega, President and CEO, stated, "The 3D modelling will be key to opening conversations with potential funding partners for the Trek South prospect. Management has been cultivating numerous contacts to initiate their review/assessment of the potential at Trek South. We are looking forward to correlating these results with the mineralized surface exposures, and to sharing more in the near future once the modelling is competed." 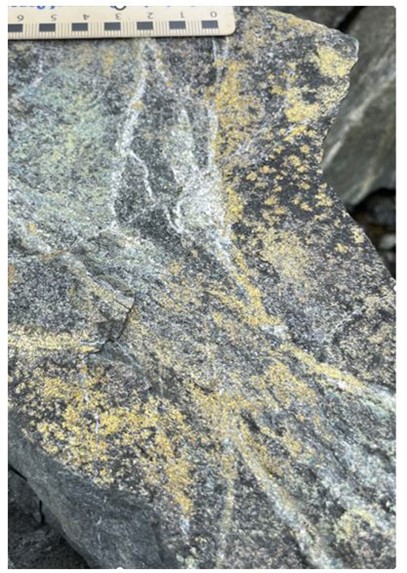 To view an enhanced version of Photo 1, please visit:
https://images.newsfilecorp.com/files/5376/138858_photo1rg.jpg. 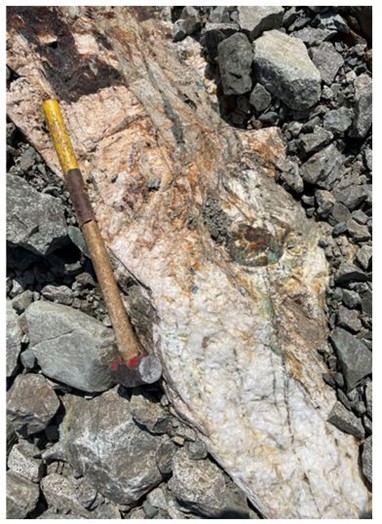 To view an enhanced version of Photo 2, please visit:
https://images.newsfilecorp.com/files/5376/138858_photo2rg.jpg.

Burega continued, "the discovery of additional quartz veins of substantial size on the North West claims in the vicinity of historic showings was another highlight of the summer program. Romios personnel also completed several weeks of exploration work on three of our projects in NW Ontario and a summary of that work will be forthcoming shortly."

The samples discussed in this document were grab and chip samples considered representative of the outcrops, veins and boulders being sampled. They were submitted to the ISO/IEC 17025 accredited ALS Canada Ltd. laboratories in Terrace and Vancouver, BC for assay and multi-element analyses. As a matter of procedure, a rigorous quality assurance and quality control program was implemented to ensure reliable assay results by inserting alternating blanks and commercial assay standards at every 10th position in the sample series. 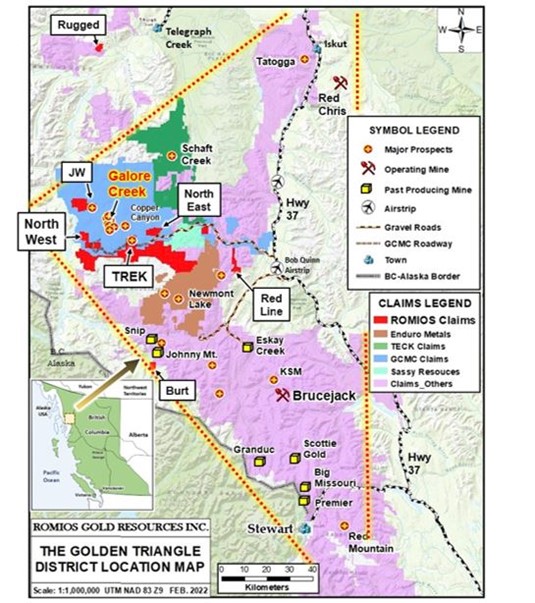 Romios Gold Resources Inc. is a progressive Canadian mineral exploration company engaged in precious-and base-metal exploration, focused primarily on gold, copper and silver. It has a 100% interest in the Lundmark-Akow Lake Au-Cu property plus 4 additional claim blocks in northwestern Ontario and extensive claim holdings covering several significant porphyry copper-gold prospects in the "Golden Triangle" of British Columbia. Additional interests include the Kinkaid Nevada claims covering numerous Au-Ag-Cu workings and two former producers: the La Corne molybdenum mine property (Quebec) and the Scossa mine property (Nevada) which is a former high-grade gold producer. The Company retains an ongoing interest in several properties including a 20% carried interest in five of Honey Badger Mining's claim blocks in the Thunder Bay silver district of northwestern Ontario; a 2% NSR on McEwen Mining's Hislop gold property in Ontario; a 2% NSR on Enduro Metals' Newmont Lake Au-Cu-Ag property in BC, and the Company has signed a definitive agreement with Copperhead Resources Inc. ("Copperhead") whereby Copperhead can acquire a 75% ownership interest in Romios' Red Line Project in BC.

To view the source version of this press release, please visit https://www.newsfilecorp.com/release/138858