The half core samples ranged in grade from 0.295 g/t Au to 1.07 g/t Au. Samples were selected throughout the known mineralization, at different depths and from different grade ranges. A 2.0 kg aliquot (P80 ~ 75 µm) was leached in a 1.0 gram sodium cyanide (NaCN) per litre of solution (40% solids by weight) for 72 hours. Calculated recoveries ranged from a low of 72.5% to a high of 94.9% and averaged 86.8% for the twelve samples tested. Residual gold grades ranged from 0.03 g/t Au to 0.43 g/t Au (Ref. Table 1.0). BV noted that gold leached rapidly in the first 8 hours and was largely complete after 24 hours. They noted no correlation between gold grade and gold recovery. BV indicated that gold recoveries in the low 90's are reasonable and recommended additional metallurgical testing to optimize gold recovery.

Wes Hanson P.Geo., CEO of Thunder Gold notes: "The initial metallurgical test work indicates that the mineralization at Tower Mountain is amenable to direct cyanidation with estimated recoveries of more than 90%. ABA testing indicates the mineralization is not acid-generating. The results assist us in defining conceptual goal posts to guide future exploration at Tower Mountain. Our geological team has been re-logging the historical core (2004-2011) to standardize nomenclature in advance of litho-structural interpretation. The goal is to identify potential controls of the higher-grade mineralization within the broad, low-grade halo that extends to the west for 500 meters from the Tower Mountain Intrusive Complex. The re-logging confirms higher gold grades occur within and immediately adjacent to, intrusive dikes and sills emplaced in the volcanic rocks surrounding the Tower Mountain Intrusion. Extensive zones of brecciation, that are strongly propylitic altered, typically return higher gold grades, especially when cut by later intrusive dikes and sills. Re-logging has identified at least two phases of the intrusion to be gold enriched, suggesting potential to define additional mineralization within the intrusion itself, and significantly increasing the exploration target area for follow-up drilling in the future.

The Company has applied for a permit to expand Induced Polarity ("IP") geophysical coverage to the north-east and south of the Tower Mountain Intrusive Complex. Current IP coverage is limited to the western side of the intrusion and IP chargeability anomalies coincide perfectly with most of the gold mineralization defined to-date through diamond drilling. The Company anticipates permit approval within weeks and our objective is to complete the survey prior to the onset of winter and prioritize targets for follow-up drilling in the winter.

Mr. Hanson notes: "The PEN property is largely unexplored with little information available in the historical assessment reports. The proximity to the Greenstone Project, currently being developed by Equinox Gold and Orion Mine Finance, clearly demonstrates the potential of the region, as does the 3.0 million ounces of historical gold production from ten former mines that operated from the 1930s through the mid 1970s. These results, with geological similarities to the mineralization described at the Greenstone Project, prompted our decision to expand the PEN property to the east where we were able to stake 106 cells (2,189 ha), roughly doubling the PEN property footprint along the interpreted trend identified by the reconnaissance field work. PEN is a 100% owned asset with year-round access in a gold camp with demonstrated discovery potential. We are excited with these initial exploration results and are currently evaluating options to evaluate the newly acquired claims to the east as quickly as possible, taking advantage of the year-round road access prior to the onset of winter." 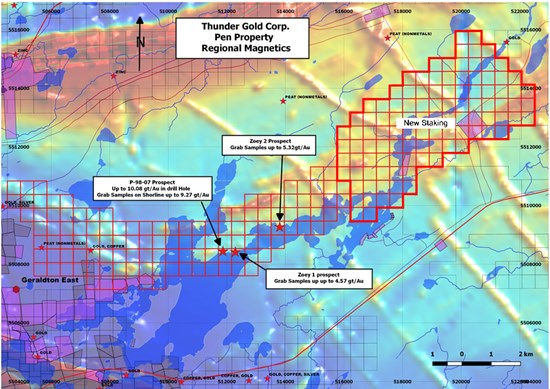 About the Tower Mountain Gold Property

The Tower Mountain Gold Property is located 5 kms. off the Trans-Canada highway, 50 kms. west of Thunder Bay, Ontario and consists of unpatented and patented lands totalling 2,038 ha. Exploration to-date suggests the property offers a large gold endowment. Gold mineralization is widespread and drilling to-date has identified low-grade gold mineralization extending outward for at least 500 meters from a central alkalic intrusion known as the Tower Mountain Intrusive Complex. Drilling has established persistent gold grades from 0.1 to >1.0 g/t along a 1,500-meter-long x 500-meter-wide x 500 meter deep block of volcanic-volcanoclastic rocks immediately west and adjacent to the central akalic intrusion. The remaining 6,000 meters of strike length surrounding the intrusion are untested. Tower Mountain shows many of the classic indicators of being an Intrusion Related Gold Deposit - a highly desirable exploration target.

To view the source version of this press release, please visit https://www.newsfilecorp.com/release/138595

Sign up to receive news releases by email for Thunder Gold Corp. or all companies belonging to the Mining and Metals industry.