Vancouver, British Columbia--(Newsfile Corp. - August 18, 2022) - CanAlaska Uranium Ltd. (TSXV: CVV) (OTCQX: CVVUF) (FSE: DH7N) ("CanAlaska or the "Company") is pleased to announce it has received and processed the results of an airborne Versatile Time Domain Electromagnetic ("VTEM Plus") and Horizontal Magnetic Gradiometer geophysical survey on its 100%-owned Hunter project in the Thompson Nickel Belt (Figure 1). Preliminary evaluation of the geophysical survey has identified several target areas within the Hunter Project (Figure 2). The survey was completed by Geotech Ltd. of Aurora, Ontario and consisted of 882 line-kms of surveying. 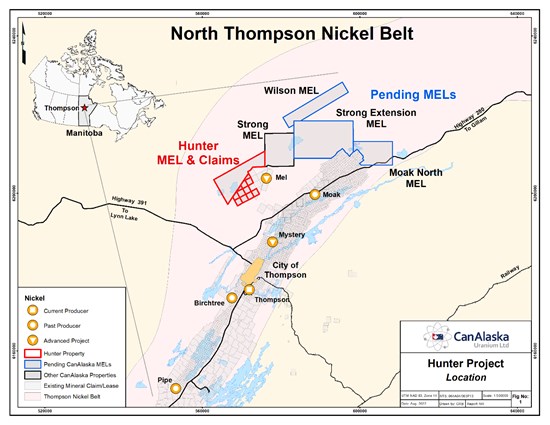 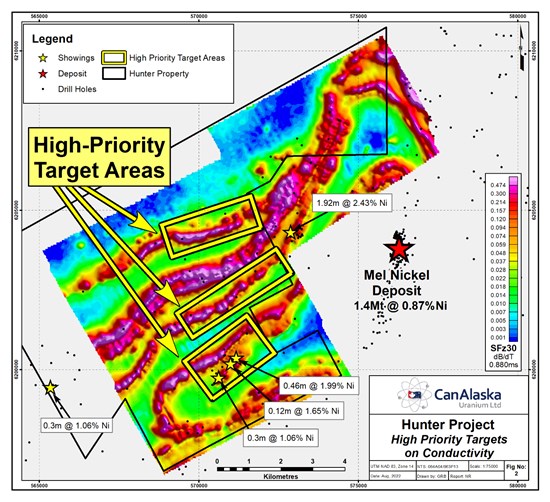 The Company's newly completed VTEM Plus survey shows a good correlation between the interpreted geology and geophysical survey data, both in the electromagnetic and magnetic responses. The survey highlights NE-SW magnetic lineament trends associated with variably conductive electromagnetic responses, interpreted to represent Ospwagan Group metasediments and associated ultramafics. In addition, the survey identified geophysical signatures that may suggest more Ospwagan Group metasediments (nickel deposit host stratigraphy) in the project area than previously documented. The VTEM Plus survey also confirmed that the modeled conductor interpreted to be the extension of the host geological horizons associated with the Mel nickel deposit to the east of the project area trend onto the Hunter project. The Company has identified three initial high-priority target areas based on the newly acquired survey data and the presence of known mineralized occurrences within and along trend of these targets. The Company is completing a 3D magnetic vector inversion (MVI) of the VTEM Plus survey data and Maxwell Modelling of electromagnetic anomalies to further refine drill targets.

CanAlaska CEO, Cory Belyk, comments, "This airborne survey has provided a significant amount of new detail to the Hunter project target inventory. The possible identification of additional host stratigraphy than was previously known highlights the value-add of this new survey to prioritize areas for future drilling campaigns. The Hunter project is just one piece of the Company's extensive land holdings in this prolific and world-class nickel belt that provides our shareholders with discovery opportunity of a critical metal for a clean energy future. CanAlaska is actively seeking joint venture partners to help move these nickel projects toward discovery."

About the Hunter Project

CanAlaska's Hunter project encompasses 8,232 hectares within the world-class Thompson Nickel Belt. The Project is located 20 km north of Thompson, Manitoba, which has significant infrastructure and capacity that has supported previous exploration programs and mine development, including year-round highway access.

The Company is actively advancing a new uranium discovery on its West McArthur uranium project in the eastern Athabasca Basin. As part of the summer program, the Company reported a 6.3 metre long interval of elevated radioactivity in the basement of WMA067, 100 m below the unconformity. WMA067 is located along a newly defined exploration trend, approximately 6 kilometres along strike to the southwest of the Company's 42 Zone mineralization. The summer drilling program is part of a $5 million program operated by CanAlaska, which holds a 77.13% ownership in the project.

CanAlaska's latest on-site videos for the West McArthur project can be viewed at www.canalaska.com.

Metal Energy has acquired a 70% interest in the Manibridge nickel project, effective August 16, 2022, as a result of recent work programs. In addition, the Company has received notice from Metal Energy of their intention to acquire 100% ownership in the Manibridge project based on positive results from the phase 1 and phase 2 drilling programs. The Company has received a total of 5,000,000 Common Shares of Metal Energy (TSX:V MERG) and $100,000 cash as part of the notification of intent to achieve 100% ownership.

To view the source version of this press release, please visit https://www.newsfilecorp.com/release/134175