The Company's 2022 diamond drilling program commenced March 14, 2022, with approximately 8,366 metres of drilling completed as of August 16, 2022. Results have been received for the first 2022 drillhole and are reported herein. Assay results are pending from two additional target zone intersections.

Initial drill hole SMD-22-001 was prioritized to test an off-hole borehole electromagnetic ("BHEM") target from sd140 identified by PNRL during the compilation and verification of historic data in 2021 (figure 1). Legacy drill hole sd140 completed in 2010 was aimed at following the down-dip extension of legacy drill hole sd119 that reported an estimated true thickness interval of 38.5 metres averaging 1.58% Ni and 2.44% Cu, including 21.4 metres of 2.34% Ni and 3.39% Cu at the Selebi deposit (see news release dated August 15, 2022). Drill hole sd119 is located approximately 300 metres from the Selebi Mine underground infrastructure. See "Historic Data".

Keith Morrison, CEO, commented: "Our primary objective with this first phase of surface drilling and borehole electromagnetics (BHEM) program at Selebi is to provide the Company with the relevant information to support the transition to underground resource drilling at both the Selebi North and Selebi deposits.

These assay results provide an indication that the mine horizons could be well mineralized beyond the limits of legacy production when the mines were placed on care and maintenance in 2016. The BHEM data is mapping conductive Ni-Cu-Co massive sulphide mineralization. The BHEM data is interpreted by management to show several large, high conductance anomalies on the northern extension of the Selebi Mine Horizon, along with a new lower horizon that has never been drilled. The surface drilling and oriented core structural measurements and the BHEM are being used to locate the structures controlling the geometry of the mine horizons, so that exploration drifts required for underground drilling can be optimized reducing the length of drill holes, time to drill and cost to develop a PEA compliant resource.

Further details of drilling completed at the Selebi deposit are outlined below.

SMD-22-001 targeted the center of the modeled BHEM plate and is located approximately 160 metres down plunge of the legacy hole sd119 (figure 2). Two intervals of amphibolite hosted Ni-Cu sulphide mineralization, the upper interval and the lower interval, are separated by a 15.5 metre interval of sporadically mineralized quartzo feldpathic gneiss.

The lower interval (from 1374.50 to 1400.20 metres) is also hosted in coarse grained amphibolite. Sulphide textures are primarily semi-massive to massive, with localized intervals of disseminations, stringers, and patchy sulphides.

A second drill was commissioned on March 26, 2022 and, to date, two drill holes plus one wedge hole have reached target depth and tested the large BHEM anomaly with assays expected in the coming weeks. Separately, two additional drill holes are currently targeting the down-plunge of the intersection in SMD-22-001-W1 with interpreted BHEM target depths expected to be reached imminently. Table 2 below shows the hole coordinates and depths of each hole. The coordinate system is WGS84 UTM Zone 35 South.

Since 2019, the PNRL technical team has been compiling and verifying information. Mine level plans were digitized and, after significant effort, PNRL now has a 3D model of the Selebi and Selebi North underground workings and infrastructure. The gathering of the geological information to build a 3D model is ongoing. Information from handwritten drill logs were merged into the historic drill hole database, and as required, historic core is being re-logged. This 3D geological and structural model will be a vital component for planning future drill programs.

Reporting of assay results from holes completed at the Selebi Mine mineralized zones is expected to occur at regular intervals over the coming weeks.

A total of 30 holes have been surveyed with BHEM and a program to collect additional BHEM data is ongoing. Almost all of the legacy holes were blocked, and a program of re-opening holes began in October 2021. Gyro and BHEM data has been collected in these re-opened holes. Collars of 228 drill holes have been located using a differential Global Positioning System (DGPS) and at another 105 sites where evidence of drilling was found, but no hole was seen. An initial downhole program of televiewer and physical property logging has also been completed to support the creation of a structural 3D model.

This work continues to highlight the potential for establishing a mineral resource estimate at depth at the Selebi deposit. The Selebi North mineralization is also open at depth, and additional potential to establish a mineral resource estimate occurs here. Given the basin structure, it is possible that the Selebi North mineralization extends at depth and flattens to the south, while also potentially extending southward. The conductors outlined to date all correlate to known horizons of nickel and copper sulphide and it is interpreted that the BHEM results demonstrate continuity between the Selebi and Selebi North deposits (figure 3).

The drilling was completed by Mitchell Drilling of Botswana utilizing a Sandvik UDR1500 and a Boart Longyear LF-160 diamond drill rig. Drill core samples (47.75mm NQ) are cut in half by a diamond saw on site. Half of the core is retained for reference purposes. Samples are generally 1.0 to 1.5 metre intervals or less at the discretion of the site geologists. Sample preparation and lab analysis was completed at the ALS Chemex in Johannesburg, South Africa. Commercially prepared Blank samples and certified Cu/Ni sulphide analytical control standards with a range of grades are inserted in every batch of 20 samples or a minimum of one set per sample batch. Analyses for Ni, Cu and Co are completed using a peroxide fusion preparation and ICP-AES finish (ME-ICP81).

The scientific and technical content of this news release has been reviewed and approved by Sharon Taylor, Chief Geophysicist of the Company, who is a "qualified person" for the purposes of National Instrument 43-101 - Standards of Disclosure for Mineral Projects ("NI 43-101").

Scientific and technical information relating to the Selebi Mine is supported by the technical report titled "Technical Report on the Selebi Mines, Central District, Republic of Botswana, Report for NI 43-101", dated June 16, 2022 (effective date of March 1, 2022) (the "Selebi Technical Report"), and prepared by SLR Consulting (Canada) Ltd. for PNRL. Reference should be made to the full text of the Selebi Technical Report, including to review the assumptions, limitations and data verification relating to the historic data compilation presented in this news release, which was prepared in accordance with NI 43-101 and is available electronically on SEDAR (www.sedar.com) under PNRL's issuer profile.

The work undertaken by the Company and SLR Consulting (Canada) Ltd. to verify the historic data compilation is further described in the Selebi Technical Report. While (i) visual estimates of oxidized sulphides appear to correlate well with logged intercepts and analytical values, and (ii) analytical values compared between the logs and the digital database appear to compare well, the technical team continues to collect, compile, review and validate historic technical data relevant to the project. To that end, the Selebi Technical Report recommends continued compilation and verification to confirm that the QA/QC program results are adequate to support the inclusion of the historical drill hole information in a mineral resource estimate in accordance with NI 43 101.

Historical down-dip drill hole sd140 was re-opened between October 19, 2021 and November 14, 2022 to facilitate new gyro and BHEM surveys. The hole failed to intersect mineralization and also failed to intersect the host amphibolite at the anomaly depth.

Certain statements contained in this news release may be considered "forward‐looking statements" within the meaning of applicable Canadian securities laws, including the timing and ability of the Company to report additional assay results at regular intervals over the coming weeks; the ability of exploration results (including drilling) to accurately predict mineralization; the significance of exploration (including drilling) results; the objectives of the first phase; the ability of the Company to transition to underground resource drilling at Selebi North and Selebi; the ability of assay results to indicate mine horizons and mineralization, at all, including beyond the limits of legacy production; management's interpretation of BHEM data; the ability of the Company to use exploration drifts for underground drilling to optimize drilling and the time and cost to develop a PEA compliant resource; the timing and ability of the Company (if at all) to commence underground drilling at Selebi North; the timing and ability (if at all) of the Company prepare an inferred mineral resource on Selebi North in accordance with NI 43-101; the ability of the Company to compile and verify historic data; the potential for establishing a mineral resource estimate on the Selebi deposit at depth; the Selebi North mineralization remaining open at depth and having a potential for a mineral resource estimate; and the business and prospects of the Company. These forward‐looking statements, by their nature, require the Company to make certain assumptions and necessarily involve known and unknown risks and uncertainties that could cause actual results to differ materially from those expressed or implied in these forward‐looking statements. Forward‐looking statements are not guarantees of performance. Words such as "may", "will", "would", "could", "expect", "believe", "plan", "anticipate", "intend", "estimate", "continue", or the negative or comparable terminology, as well as terms usually used in the future and the conditional, are intended to identify forward‐looking statements. Information contained in forward‐looking statements are based upon certain material assumptions that were applied in drawing a conclusion or making a forecast or projection, including management's perception of geology and mineralization; perceptions of historical trends, current conditions and expected future developments, current information available to the management of the Company, public disclosure from operators of the relevant mines, as well as other considerations that are believed to be appropriate in the circumstances. The Company considers its assumptions to be reasonable based on information currently available, but cautions the reader that their assumptions regarding future events, many of which are beyond the control of the Company, may ultimately prove to be incorrect since they are subject to risks and uncertainties that affect the Company and its businesses.

For additional information with respect to these and other factors and assumptions underlying the forward‐looking statements made in this news release concerning the Company, see the section entitled "Risks and Uncertainties" in the most recent management discussion and analysis of the Company, which is filed with the Canadian securities commissions and available electronically under the Company's issuer profile on SEDAR (www.sedar.com) and the risk factors outlined in the filing statement of the Company dated July 22, 2022, which are available electronically on SEDAR (www.sedar.com) under the PNRL's issuer profile. The forward‐looking statements set forth herein concerning the Company reflect management's expectations as at the date of this news release and are subject to change after such date. The Company disclaims any intention or obligation to update or revise any forward‐looking statements, whether as a result of new information, future events or otherwise, other than as required by law.

Neither the Exchange nor its Regulation Services Provider (as that term is defined in the policies of the Exchange) accepts responsibility for the adequacy or accuracy of this news release. No stock exchange, securities commission or other regulatory authority has approved or disapproved the information contained herein. 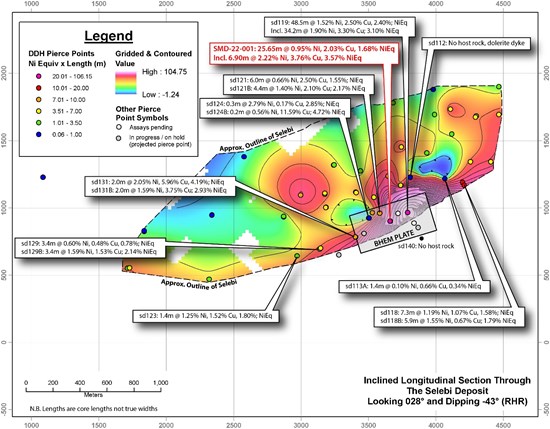 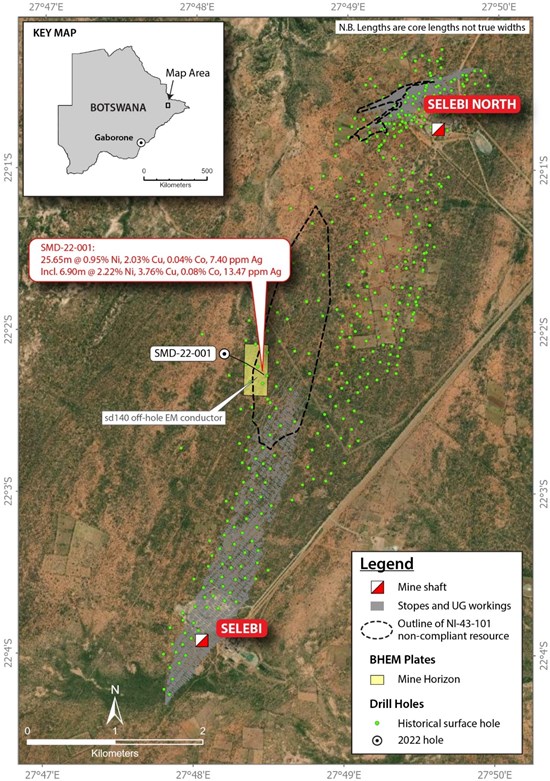 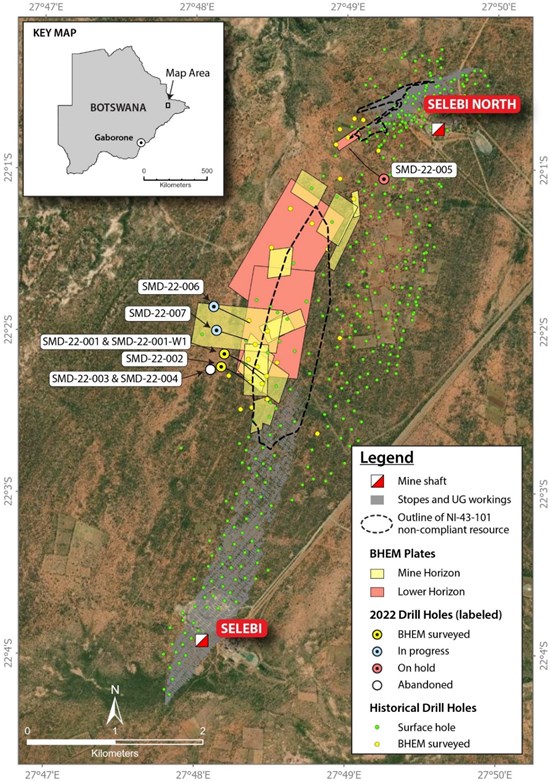 To view the source version of this press release, please visit https://www.newsfilecorp.com/release/134153

Sign up to receive news releases by email for Premium Nickel Resources Ltd. or all companies belonging to the Mining and Metals industry.