Fathom Announces Summer 2022 Exploration Program at Albert Lake Consisting of AirTEM Surveys and Up To 2,500 M of Drilling

Calgary, Alberta--(Newsfile Corp. - June 8, 2022) - Fathom Nickel Inc. (CSE: FNI) (FSE: 6Q5), (OTCQB: FNICF) (the "Company" or "Fathom") is pleased to announce the commencement of its summer exploration program at the Company's Albert Lake Property. The program will consist of a helicopter electromagnetic and magnetic ("AirTEM") survey and up to 2,500m of diamond drilling. Drilling will focus on further defining the south extension the Bay Area Conductive Corridor (refer to Fathom Press Release of April 28, 2022). The AirTEM survey, of up to 2,500 line-km, will cover the same Bay Area Conductive Corridor utilizing 50m spaced flight lines before moving to a second grid to cover surface geochemistry and gradient magnetic susceptibility ("MAG") features defined in 2021.

The company has successfully defined magmatic nickel sulphide mineralization occurring within an interpreted 300m long corridor identified through positive MAG signatures, positive conductivity from the 2008 versatile time domain electromagnetic ("VTEM") survey, positive off-hole conductivity in borehole electromagnetic surveys ("BHEM"), positive surface time-domain electromagnetics ("TDEM") results (2022) and by surface soil geochemistry. The Bay Area Conductive Corridor is situated 400 - 500m west-northwest of the historic high-grade Ni-Cu-Co+PGE Rottenstone Mine and represents the first ever discovery of magmatic nickel mineralization on the Albert Lake property - post production of the Rottenstone Mine (1965 - 1969). Up to 2,500m of drilling is planned to follow-up on the successful intersections in AL22052 and AL22057 drilled during the 2022 winter program and to test very similar BHEM conductive plates/models that occur in the area of drillholes AL21034 and AL21026 (See Figure 1). 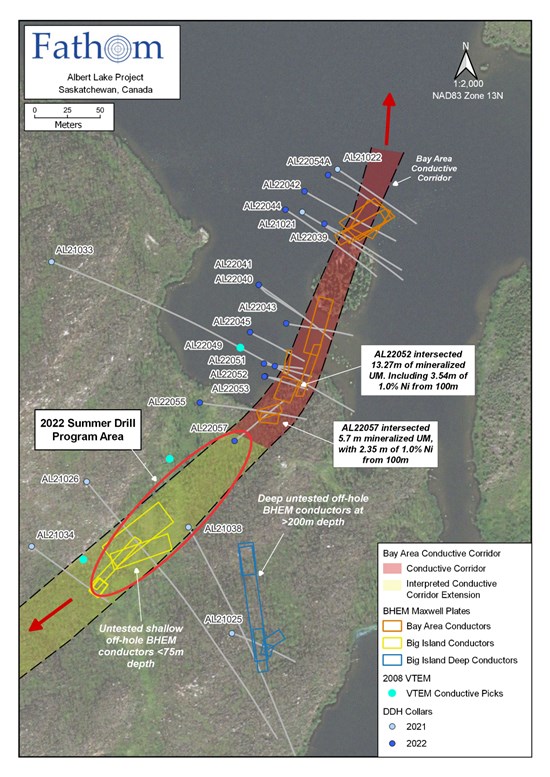 Brad Van Den Bussche, Fathom's CEO commented, "We are extremely encouraged by the widespread occurrence of magmatic nickel mineralization and Rottenstone-like textures identified along the Bay Area Conductive Corridor. We are excited to further define the Corridor and advance similar, earlier stage targets throughout the property, during the summer 2022 program."

Fathom is a resource exploration and development company that is targeting high-grade nickel sulphide discoveries for use in the rapidly growing global electric vehicle market.

The Company is accelerating exploration on its flagship Albert Lake Project, host to the historic Rottenstone mine, which is recognized as one of the highest‐grade (Nickel, Copper, Platinum group metals) deposits of its type ever mined in Canada. The Albert Lake Project consists of over 90,000 ha of mineral claims located in the Trans-Hudson Corridor of Saskatchewan, which is home to numerous world-class mining camps.

This news release contains "forward-looking statements" that are based on expectations, estimates, projections and interpretations as at the date of this news release. Forward-looking statements are frequently characterized by words such as "plan", "expect", "project", "seek", "intend", "believe", "anticipate", "estimate", "suggest", "indicate" and other similar words or statements that certain events or conditions "may" or "will" occur, and include, without limitation, statements regarding the enhancement of the Company's geologic model and extending the areas of known mineralization and the Company's work towards defining a resource base. Such forward looking statements involve known and unknown risks, uncertainties and other factors which may cause the actual results, performance or achievements of the Company to be materially different from any future results, performance or achievements expressed or implied by such forward-looking statements. Such risks and other factors may include, but are not limited to, the results of exploration activities; the ability of the Company to complete further exploration activities; timing and availability of external financing on acceptable terms. The Company does not undertake to update any forward-looking information except in accordance with applicable securities laws.

NOT FOR DISTRIBUTION TO UNITED STATES NEWSWIRE SERVICES OR FOR DISSEMINATION IN THE UNITED STATES. ANY FAILURE TO COMPLY WITH THIS RESTRICTION MAY CONSTITUTE A VIOLATION OF U.S. SECURITIES LAWS.

To view the source version of this press release, please visit https://www.newsfilecorp.com/release/126922

Sign up to receive news releases by email for Fathom Nickel Inc. or all companies belonging to the Mining and Metals industry.