Since tabling a PEA for near-surface heap-leach operation at the Project, the Company has been focused on improving the metrics of the project which yielded an after-tax NPV5% of US$45M and IRR of 22%. Specifically, exploration has been focused on delineating additional near-surface oxide resources to expand the open pit and reclassify waste with mineralized material. Both of the aforementioned would have the possibility to increase the production profile, extend the mine life, and improve project economics from a cost and valuation perspective (i.e., NPV and IRR).

Jeremy Poirier, CEO and Director of Golden Independence, commented "We continue to explore for opportunities to improve upon the December 2021 Preliminary Economic Assessment. The objective of the ongoing exploration program is to identify locations for potential follow-up drilling to expand the near-surface oxide resource. We are encouraged by the initial results from sampling within the proposed open-pit as it not only has the potential to increase the number of oxide ounces but these ounces would already be largely costed into the economics as they are currently classified as waste material, notwithstanding the potential for additional 'high-grade' feed."

The exploration program consists of surface sampling both within the current open-pit and to the east and west of the pit boundary, in addition to sampling of previously-unsampled drilling done by previous operators. 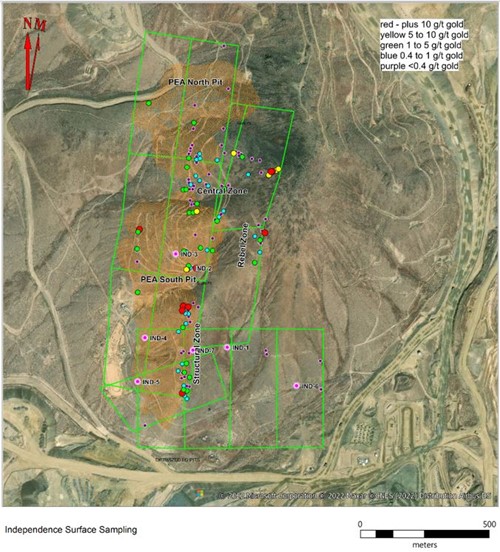 To view an enhanced version of this graphic, please visit:
https://orders.newsfilecorp.com/files/7273/116891_img.jpg

As clearly demonstrated in Figure 1, a number of the 0.4 g/t gold or better samples lie within the boundaries of the PEA pits, largely in the Central and South. The Company is very encouraged with the assay results as the sampling suggests the Company may find additional mineralization, and potentially additional ounces, within the PEA pit, thereby potentially enhancing the project economics.

The Company has a further 47 samples currently at ALS Elko awaiting analysis.

The Company cautions investors grab samples can be "selected" samples and may not necessarily be representative of mineralization on the property.

The Company is also revisiting the seven deep core holes, drilled by previous operators in the southern portion of the claim block to evaluate the deep skarn, which forms the basis of the Company's Inferred Resource of 3.8 million tonnes grading 6.53 g/t gold (796,200 ounces of gold) which ranges in depth from 2800 to 2900 feet (850 to 880 metres). Only one of the seven holes was sampled through the top section (0 to 500 feet) of these holes, while the near surface potential of the remaining holes in unknown.

The core has been stored on site and the Company plans to relog and sample the upper +500 feet of the holes.

The technical content of this news release has been reviewed and approved by R. Tim Henneberry, P.Geo. (BC), a Director and President of Golden Independence Mining Corp. and a Qualified Person under National Instrument 43-101.

Golden Independence Mining Corp. is a development company currently focused on the advanced-stage Independence project located adjacent to Nevada Gold Mine's Phoenix-Fortitude mine in the Battle Mountain-Cortez Trend of Nevada. The Independence project hosts an M&I resource of 334,300 ounces of gold and an Inferred resource of 847,000 ounces of gold with a substantial silver credit. A 2021 Preliminary Economic Assessment (PEA) outlined a low-cost heap leach operation focusing on the near-surface resource with total production of 195,443 ounces of gold at an all-in sustaining cost of US$1,078 per ounce of gold.

Forward-looking statements are frequently, but not always, identified by words such as "expects", "anticipates", "believes", "intends", "estimates", "potential", "possible", and similar expressions, or statements that events, conditions, or results "will", "may", "could", or "should" occur or be achieved. Forward-looking statements in this press release relate to, among other things, the timing of the permitting of the Project, the completion and timeline for the submission of an engineering study to the BLM, the potential for development of the Project and the potential attractiveness of the Project to a strategic partner. Statements concerning mineral resource estimates may also be deemed to constitute forward-looking information to the extent that they involve estimates of the mineralization that will be encountered if the Independence project is developed. Actual future results may differ materially. There can be no assurance that such statements will prove to be accurate, and actual results and future events could differ materially from those anticipated in such statements. Forward-looking statements reflect the beliefs, opinions and projections on the date the statements are made and are based upon a number of assumptions and estimates that, while considered reasonable by the Company, are inherently subject to significant business, economic, competitive, political and social uncertainties and contingencies. Many factors, both known and unknown, could cause actual results, performance or achievements to be materially different from the results, performance or achievements that are or may be expressed or implied by such forward-looking statements and the parties have made assumptions and estimates based on or related to many of these factors. Such factors include, without limitation: the occurrence of unexpected financial obligations, fluctuations in the price of gold or certain other commodities; fluctuations in the currency markets; changes in national and local government, legislation, taxation, controls, regulations and political or economic developments; risks and hazards associated with the business of mineral exploration, development and mining (including environmental hazards, industrial accidents, unusual or unexpected formations, pressures, cave-ins and flooding); the presence of laws and regulations that may impose restrictions on mining and employee relations. Readers should not place undue reliance on the forward-looking statements and information contained in this news release concerning these times. Except as required by law, the Company does not assume any obligation to update the forward-looking statements of beliefs, opinions, projections, or other factors, should they change, except as required by law.

To view the source version of this press release, please visit https://www.newsfilecorp.com/release/116891