Drilling of the Company's third diamond hole MODD003 is now complete, and logging indicates that the hole has potentially intersected a large, deep copper sulphide mineralisation system of over 250m in thickness, with the field team logging pyrite, chalcopyrite, bornite and chalcocite sulphides occurring as amygdales, disseminations, fracture fillings (Figure 1), or in veinlets throughout this zone. The significance of this sulphide mineralisation is under assessment by the Company's geology team, with detailed logging underway and assays yet to be received.

Hole MODD003, a deep vertical hole (drilled to 528m) to the southeast of the previous two holes drilled by the Company, was designed to test a broad IP geophysical target which the Company has interpreted to represent a potential feeder system for the widespread near surface manto copper mineralisation (Figure 2 and Figure 3). 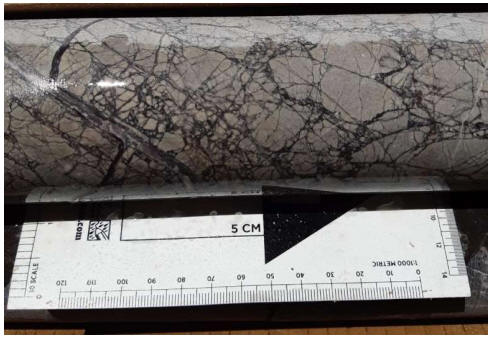 "Drilling of our initial campaign of diamond holes at Mostazal is progressing very well. We have intersected widespread copper sulphide mineralisation in all three holes completed to date, with our latest hole MODD003 the deepest hole drilled at the project thus far.

"We are working to understand the significance of the over 250m sulphide zone in MODD003 and, while we have not yet seen the typical alteration system that we would expect to see associated with our original porphyry target, we are extremely encouraged by the significant size of the mineralisation system we have intersected. The addition of detailed down hole geophysical data together with the assay results from sampling of this core will be required to better understand the extent of the mineralised system at Mostazal. The Company is also planning to conduct Induced Polarization (IP) and/or Magnetotellurics (MT) geophysical surveys down to 500m depth or more to better assist in the hunt for the main feeder system.

"These first drill holes were designed to test the near surface manto-style mineralisation encountered in the historical drilling, and our logging has confirmed the presence of widespread alteration and disseminated copper sulphide mineralisation throughout all three holes completed so far.

"The drill rig has now moved onto MODD004, our last planned hole of this initial phase of drilling. This drillhole is targeting a high-tenor copper-in-soil anomaly to the east of the main manto mineralisation and mining area and may represent the eastern extension of the known mineralisation or the surface expression of a separate mineralised system below the main manto stacked lenses."

Preliminary assessments of the core from MODD003 show copper sulphides over an interval of approximately 250m starting from a depth of approximately 270m, which appears to correlate with the core of the modelled geophysical IP chargeability anomaly (Figure 2). 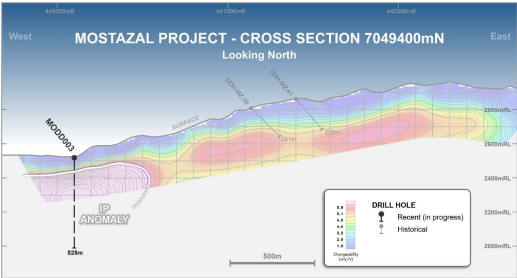 Similar to holes MODD001 and MODD002, sulphide mineralisation in MODD003 comprises chalcopyrite, chalcocite+/-bornite occurring as amygdales, disseminations, fracture fillings or in veinlets throughout the sulphide zone. Final mineralised intervals remain to be defined based on pending assay results. 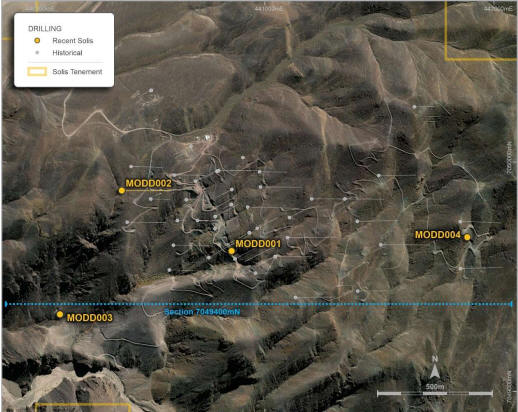 The Company is currently engaged in discussions with local down-hole geophysical contractors in Chile in order to undertake a detailed physical property survey. This data will assist the Company in matching the logged lithologies and sulphide mineralisation to the surface IP response. This data in conjunction with the final assay results will enable the development of a detailed model for the observed mineralisation.

Lithologies intersected in MODD003, were again similar to those in MODD001 and MODD002 with a series of altered (haematite/chlorite/albite), amygdaloidal to fragmental porphyritic andesites throughout the hole; with a zone of approximately 20m containing a series of fine grained, locally highly fractured micro-diorite intrusive dykes from 344m (Figure 1).

Drilling has now commenced on MODD004 located to the east of the Company's previous holes, where existing surface geochemistry has highlighted a large high-tenor copper-in-soil anomaly (Figure 3 and Figure 4). Recent reconnaissance of this area has confirmed the presence of artisanal mining in the area, with a number of separate manto lodes being exploited. Despite these obvious signs of mineralisation, this eastern area has remained relatively untested by previous explorers. 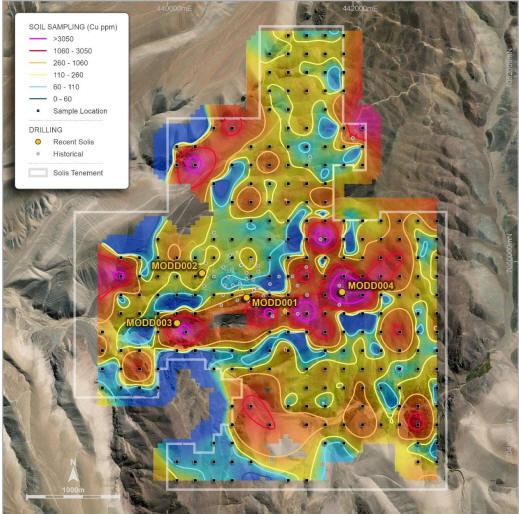 This area lies well to the east of the main mining area at Mostazal and may be interpreted to potentially represent the eastern extension of the known manto system, or the surface expression of a separate deeper manto system below the main stacked manto lenses being exploited by artisanal miners. MODD004 has a planned depth of up to 500m and will further test the near surface manto environment as well as the potential blind system at depth.

While the Company is waiting for assay results from this initial phase of drilling, a program of detailed structural surface mapping and relogging of the historical drill core will be initiated, with the aim of developing a more robust geological model for the extensive near surface manto copper mineralisation and supporting the estimation of a maiden JORC Resource at Mostazal.

Solis Minerals is a Latin American-focused mining exploration company. The Company is earning into a 100% interest in the Mostazal Copper Project in Chile's Atacama Desert, one of the world's premier copper production jurisdictions. The Company also holds a 100% interest in a package of highly prospective IOCG (iron oxide copper/gold) and porphyry copper projects in southwestern Peru within the country's prolific coastal copper belt - a source of nearly half of Peru's copper production.

Issued on the directive of the board of Solis.

Derrick Strickland, P. Geo. (1000315), is a qualified person and has reviewed and approved the technical content of this news release. *The qualified person has been unable to verify the information on the adjacent properties. Mineralisation hosted on adjacent and/or nearby and/or geologically similar properties is not necessarily indicative of mineralisation hosted on the Company property.

The information in this ASX release in relation to Geological Information and Exploration Results is based on and fairly represent information compiled by Mr Anthony Greenaway, a Competent Person who is a Member of the Australasian Institute of Mining and Metallurgy. Mr Greenaway is an employee of Solis Minerals Ltd. and has sufficient experience which is relevant to the style of mineralisation and types of deposit under consideration and to the exploration activities undertaken to qualify as a Competent Person as defined in the 2012 Edition of the "Australian Code for Reporting of Mineral Resources and Ore Reserves". Mr Greenaway consents to the inclusion in this report of the matters based on information in the form and context in which it appears. Mr Greenaway has provided his prior written consent as to the form and context in which the Geological Information and Exploration Results and supporting information are presented in this Announcement.

All information relating to exploration results that have been previously released to the market is appropriately referenced in this document. 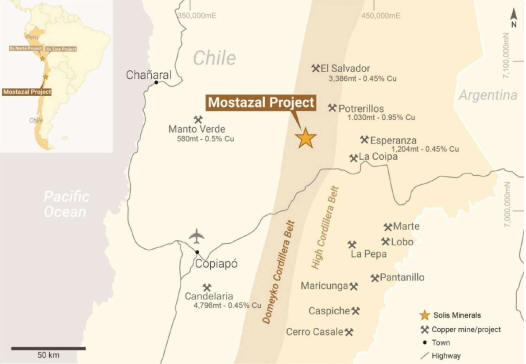 (Criteria listed in the preceding section also apply to this section)

To view the source version of this press release, please visit https://www.newsfilecorp.com/release/114690

Sign up to receive news releases by email for Solis Minerals Ltd. or all companies belonging to the Mining and Metals industry.