Calgary, Alberta--(Newsfile Corp. - February 7, 2022) - Cassiar Gold Corp. (TSXV: GLDC) (OTCQX: CGLCF) (the "Company") announces that it has completed the acquisition of a 100% interest in the Bayonne and Sheep Creek properties collectively known as the Sheep Creek Camp, located near Salmo, British Columbia. Covering an area of 3,939 hectares, the Sheep Creek Camp is highly prospective for both gold and silver discoveries and ranks as the third largest past-producing orogenic gold district in B.C. (behind Barkerville and Bralorne) with historical gold production of approximately 742,000 oz at an average grade of 14.7 g/t.[1]

"We are excited to now own 100% of the Sheep Creek Camp which provides our shareholders with another avenue for exploration and discovery upside," stated Marco Roque, President and CEO of Cassiar Gold. "The Sheep Creek Camp is located on the same inland orogenic gold belt as our flagship Cassiar Gold Property and the past-producing Cariboo-Barkerville district and is a geological analogue to both projects in that it hosts a multitude of gold-bearing quartz veins with the potential to carry high-grade gold, as indicated by its historical production grades[2]. There are between 60 to 70 known vein systems at the camp and little modern exploration has taken place since the 1950s. We are currently evaluating the project for exploration work in 2022 and will take our geological understanding of the Cassiar South area and apply them to Sheep Creek to maximize our chances of exploration success."

As previously announced by the Company on January 16, 2017, the Company (previously Margaux Resources Ltd. ("Margaux")), entered into an option agreement with Yellowstone Resources Ltd. (a private company, based in British Columbia), as amended by amending agreements dated February 10, 2020, July 10, 2020 and February 15, 2021 (collectively, the "YSR Agreement") for the acquisition of 100% of the Bayonne and Sheep Creek properties.

The Company has now paid the final instalment cash payment of $100,000 and issued 90,000 common shares with respect to the YSR Agreement to complete the 100% acquisition of the Sheep Creek Camp. Total consideration paid for the properties from 2017 onwards was $590,000 in cash and the issuance of 585,151 shares. Additional details can be found in the Company's latest MD&A filed on SEDAR.

The Company is now conducting a full compilation and review of exploration opportunities and approaches for exploration of the Sheep Creek project.

The Bayonne and Sheep Creek properties are located approximately 42 km and 12 km, respectively, east of Salmo, B.C. The properties consist of 79 crown grants and 31 mineral tenures totaling 3,939 hectares in the Nelson mining division and are prospective for gold and silver.

Since the early days of discovery, surface work and an estimated 65 km of underground development has identified approximately 60 to 70 veins over a roughly 8-km north-south trend. Total production from the Sheep Creek gold camp from 1900 to 1951 was approximately 742,000 ounces of gold, 365,000 ounces of silver, 377,000 lbs of lead and 312,000 lbs of zinc from 1.72 Mt of ore. Total production from the mines that comprise the Company's Sheep Creek Project (including Motherlode, Bluestone, Reno, Nugget, Gold Belt and Queen/Sheep Creek) is approximately 623,140 ounces of gold and 321,000 ounces of silver, or about 84% of the camp's total gold production.[3] In contrast to Barkerville and Bralorne, the Sheep Creek gold district has seen little exploration since mining ceased in the early 1950s. 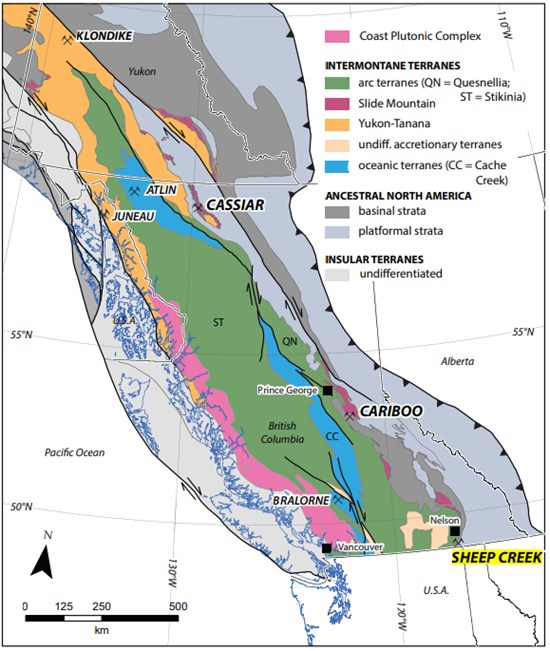 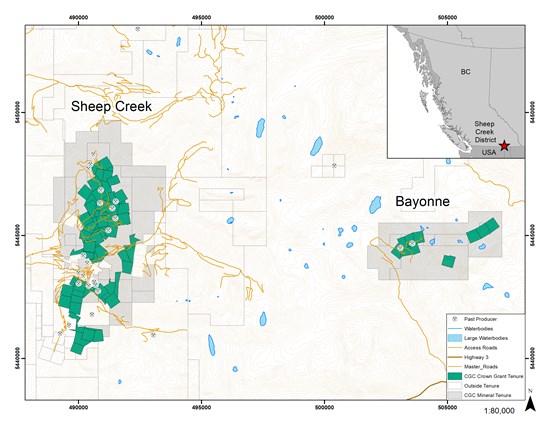 The Sheep Creek area is underlain by a thick sequence of Lower Cambrian and Upper Proterozoic argillite, quartzite, limestone and schists belonging to the Quartzite Range, Reno and Laib Formations. Two north-trending anticlines are the dominant structures in the area. Gold veins in the Sheep Creek camp occur preferentially in bedded sequences of quartzite and phyllitic quartzite of the Reno and Quartzite Range Formations of the Lower Cambrian Hamill Group. The most productive gold veins were steeply south-dipping quartz veins containing pyrite, pyrrhotite and base metal sulphides that occupy ENE-trending fault-fracture zones with dextral strike-slip displacement.

Although there are gaps in the distribution of the veins, they are mostly regularly spaced on a frequency of approximately 100 to 200 m within a 1.2-km-wide, 7-km-long north-northeast trending corridor that coincides with the Western anticline and the west limb of the Sheep Creek anticline. Veins are preferentially developed in competent units in the folded sedimentary sequence, and only outcropping or near-surface veins have been historically mined.

Like the Cassiar Gold district, in addition to extensions of known veins and additional parallel veins, the Company believes there is untested potential for unexposed stacked veins at Sheep Creek where additional, competent folded units lie below the areas of historical mining, especially in anticlinal hinges.

David Rhys, P. Geo., has reviewed and approves the technical content of this release.

Cassiar Gold Corp. is a Canadian gold exploration company holding a 100% interest in its flagship Cassiar Gold Property located in British Columbia, Canada. The Cassiar Gold property spans 590 km2 and consists of two main project areas: Cassiar North, which hosts a NI 43-101-compliant inferred resource estimate of 1Moz at 1.43 g/t Au (cutoff grade of 0.7 g/t) known as the as the Taurus Deposit (see National Instrument 43-101 Technical report on the Cassiar Gold property, amended Nov. 12, 2019, by S. Zelligan, posted to SEDAR); and Cassiar South which hosts numerous gold showings, historical workings, and exploration prospects. Historical underground mines in the Cassiar South area have yielded over 315,000 oz of Au at grades of between 10 and 25 g/t Au (BC Minfile), underscoring the high potential for further discovery and expansion of bonanza-grade orogenic gold veins.

To view the source version of this press release, please visit https://www.newsfilecorp.com/release/112901