The drill intercepts are from the first six of twelve core holes which tested the eastern half of the 1-kilometre long Sveinson target during the Fall of 2021 (see Figures 1 and 2). Drilling was widely spaced, but successfully intersected multiple shallow veins at less than 100 metres below surface, as well as several deeper vein intercepts at over 350 metres below surface. Veins were intersected across the full 150-metre width of the Sveinson structural zone, with preliminary 3D modeling indicating continuity between holes.

The Sveinson target is a broad east-west-trending structural zone which forms the transition from the strongly silver-enriched Camp target to the west into the gold-enriched southern portion of the No. 3 target to the east. Four separate veins, initially modelled from the Camp target, project into the Sveinson target and are primary targets of this most recent drill testing.

VP Exploration Rob Macdonald commented, "The identification of several new shallow veins in drilling on the eastern Sveinson target helps confirm the lateral projection of mineralized structures from the 2019 Resource contained in the No. 3 vein westward to the Company's recent resource-delineation drilling at the Camp Vein target. Assays from the western Sveinson target are pending, and mineralization remains open both laterally and at depth for further drill testing in 2022."

Winter drilling is underway on the NG-3 Vein system, located east of the No. 3 target. Up to nine holes, totaling 4000 metres, are planned for the NG-3 and other targets during this phase. 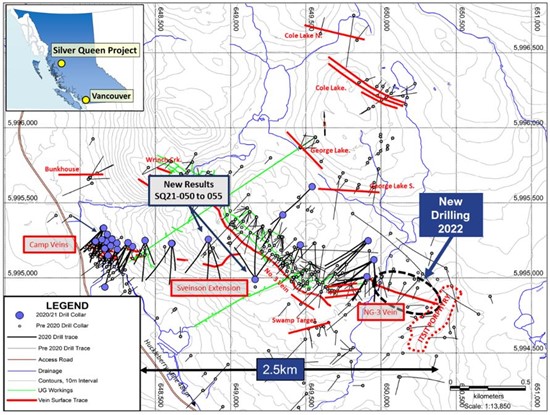 Figure 1: Plan Map of targets on the Silver Queen vein system, BC

To view an enhanced version of Figure 1, please visit:
https://orders.newsfilecorp.com/files/5566/112506_equitymetals1.jpg 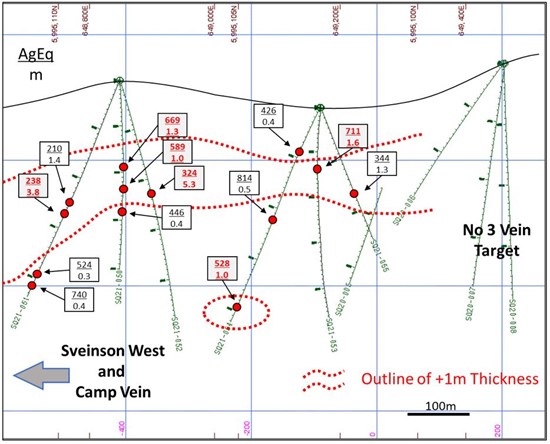 To view an enhanced version of Figure 2, please visit:
https://orders.newsfilecorp.com/files/5566/112506_equitymetals2.jpg

Table 1: Summary Composites from September2021 Drilling on the Sveinson Target.

The Silver Queen Project is a premier gold-silver property with over 100 years of historic exploration and development and is located adjacent to power, roads and rail with significant mining infrastructure that was developed under previous operators Bradina JV (Bralorne Mines) and Houston Metals Corp. (a Hunt Brothers company). The property contains an historic decline into the No. 3 Vein, camp infrastructure, and a maintained Tailings Facility.

The Silver Queen Property consists of 45 mineral claims, 17 crown grants, and two surface crown grants totalling 18,852ha with no underlying royalties. Mineralization is hosted by a series of epithermal veins distributed over a 6 sq km area. An initial NI43-101 Mineral Resource Estimate was detailed in a News Release issued on July 16th, 2019 and is hosted by the No. 3 Vein, which is traced by drilling for approximately 1.2km and then to the southeast where it transitions into the NG-3 Vein close to the buried Itsit copper-molybdenum porphyry.

More than 20 different veins have been identified on the property, forming an extensive network of zoned Cretaceous- to Tertiary-age epithermal veins. The property remains largely under explored.

The Company owns 100% interest, with no underlying royalty, in the Silver Queen project, located along the Skeena Arch in the Omineca Mining Division, British Columbia. The property hosts high-grade, precious- and base-metal veins related to a buried porphyry system, which has been only partially delineated. The Company also has a controlling JV interest in the Monument Diamond project, NWT, strategically located in the Lac De Gras district within 40 km of both the Ekati and Diavik diamond mines. The project owners are Equity Metals Corporation (57.49%), Chris and Jeanne Jennings (22.11%); and Archon Minerals Ltd. (20.4%). Equity Metals is the operator of the project.

The Company also has royalty and working interests in other Canadian properties, which are being evaluated further to determine their value to the Company.

Robert Macdonald, MSc. P.Geo, is VP Exploration of Equity Metals Corporation and a Qualified Person as defined by National Instrument 43-101. He is responsible for the supervision of the exploration on the Silver Queen project and for the preparation of the technical information in this disclosure.

On behalf of the Board of Directors
"Joseph Anthony Kizis, Jr."

For further information, visit the website at https://www.equitymetalscorporation.com; or contact us at 604.641.2759 or by email at ir@mnxltd.com.

Neither TSX Venture Exchange nor its Regulation Services Provider (as that term is defined in the policies of the TSX Venture Exchange) accepts responsibility for the adequacy or accuracy of this release. This news release may contain forward-looking statements. Forward-looking statements address future events and conditions and therefore involve inherent risks and uncertainties. Actual results may differ materially from those currently anticipated in such statements. Factors that could cause actual results to differ materially from those in forward-looking statements include the timing and receipt of government and regulatory approvals, and continued availability of capital and financing and general economic, market or business conditions. Equity Metals Corporation does not assume any obligation to update or revise its forward-looking statements, whether as a result of new information, future events or otherwise, except to the extent required by applicable law.

To view the source version of this press release, please visit https://www.newsfilecorp.com/release/112506

Sign up to receive news releases by email for Equity Metals Corporation or all companies belonging to the Mining and Metals industry.