Vancouver, British Columbia--(Newsfile Corp. - January 12, 2022) - Viscount Mining Corp. (TSXV: VML) (OTCQX: VLMGF) ("Viscount" or "the Company") is pleased to announce step out drill results which further increases our understanding of the Kate Silver Resource (KSR) and expands the size of the KSR in multiple directions at Silver Cliff Colorado.

The focus of Viscount Mining's third phase of drilling was to test the outer boundaries of the Kate Silver Resource (KSR) as defined in Dr. Gilles Arseneau's NI43-101 in 2018. Five of these nine drill holes lie to the northeast of the previous KSR and should significantly expand the silver resource in this direction. Specifically, drill hole 21-16, which lies approximately 120 meters outside of the previous mineralized body definition, revealed 88.8 g/t silver over 16.2 meters including 8.5 meters testing at 162.1 G/T silver. In all, these five step out drill holes in the northeast Kate cover a surface area of over 12,500 square meters and successfully expand the footprint of mineralization outside of the KSR. All holes contain sections testing above the current cut-off grade (~20 G/T). In addition to northeast expansion, the drilling also revealed slight expansion to the south. Drill holes 21-11 and 21-12 both contain sections testing over 124 G/T and are positioned up to 25 meters outside of the KSR boundary. The report titled Mineral Resource Estimate for the Silver Cliff Property, Custer County, Colorado, USA dated April 15, 2018 was prepared by Dr. Gilles Arseneau, Ph.D., P. Geo of Arseneau Consulting Services ("ACS") in accordance with the Canadian Institute of Mining, Metallurgy and Petroleum ("CIM") Definition Standards incorporated by reference in National Instrument 43-101 ("NI 43-101") for its Silver Cliff property in Colorado.

Using historic drilling data and recent soil sample results, drill hole locations were selected outside of the KSR boundary, primarily to the northeast and south. Viscount is pleased to announce that the third phase step out drill holes exhibited results above cut-off grades. As shown in the map below, this now accounts for nine drill holes drilled outside of the KSR. 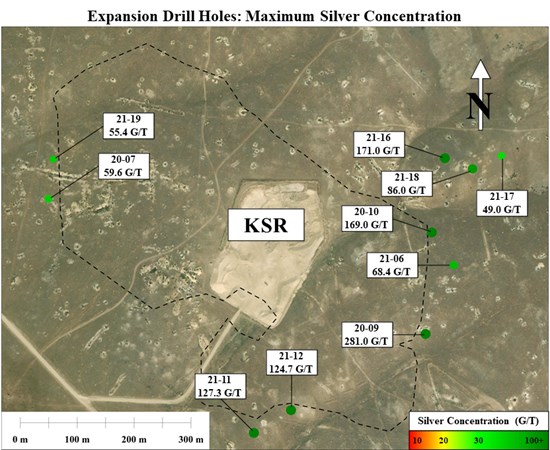 Silver Cliff Exploration Manager, Jacob Hooker, stated, "Not only will these results help expand the silver resource nearly 200 meters to the northeast, they also have great implications for inexpensive open-pit mining with most of the mineralization being immediately below the surface."

The combination of the drilling, soil geochemical surveys and the geophysical survey will allow the exploration team to have much more data at their disposal to plan the phase four drill program which will begin in the first quarter of 2022. As Viscount transitions into the fourth phase of the drilling program, we will focus on further developing zones of high-grade silver deposition throughout the Kate, as well as continue to test the bounds of the previously defined ore body in promising directions.

Confirmation of results of all our work will be included our next NI-43-101 which will contain an updated resource calculation in Q2 2022.

Tenneco Minerals leased the Kate property in 1987. They had previous drill data available to them, which was the results from 11,930 meters in 249 drill holes that had been done since 1968.The following two years Tenneco drilled an additional 143 holes totaling 7,949 meters. Based on the accumulated data and feasibility study, Tenneco Minerals made the decision with silver at $5.00 USD an ounce to construct at that time a $35,000,000 USD milling operation for the extraction of the silver reserves at Silver Cliff. Shortly thereafter Tenneco's parent company was sold, and the planned milling operation was abandoned.

All Viscount's drilling to date has been core. The company has implemented a rigorous quality assurance/quality control program at the Silver Cliff project. Core is retrieved from the drill site to a locked storage facility, where it is logged and then cut by independent geologists. Half of the core is bagged, and standards, blanks and duplicates are frequently inserted in to the sample stream. These are then boxed and then shipped via USPS to Skyline Labs in Tucson, Arizona. Pulps and rejects will then be retrieved, and stored with the split core at our locked facility.

Viscount Mining Corp. is a project generator and an exploration company with a portfolio of silver and gold properties in the Western United States, including Silver Cliff in Colorado and Cherry Creek in Nevada.

The Silver Cliff property in Colorado lies within the historic Hardscrabble Silver District in the Wet Mountain Valley, Custer County, south-central Colorado. It is located 44 miles WSW of Pueblo, Colorado, and has year-around access by paved road. The property consists of 96 lode claims where high grade silver, gold and base metal production came from numerous mines during the period 1878 to the early 1900's. The property underwent substantial exploration between 1967 and 1984. The property is interpreted to encompass a portion of a large caldera and highly altered sequence of tertiary rhyolitic flows and fragmental units which offers potential to host deposits with both precious and base metals. This has been demonstrated in the mineralization historically extracted from the numerous underground and surface mining operations. Based on the accumulated data and feasibility study, Tenneco Minerals made the decision with silver at $5.00 USD an ounce to construct at that time a $35,000,000 USD milling operation for the extraction of the silver reserves at Silver Cliff. Shortly thereafter Tenneco's Mining Unit was sold, and the planned milling operation was abandoned.

The Cherry Creek exploration property is in an area commonly known as the Cherry Creek Mining District, located approximately 50 miles north of the town of Ely, White Pine County, Nevada. Cherry Creek consists of 578 unpatented and 17 patented claims as well as mill rights. Cherry Creek includes more than 20 past producing mines. In January 2021, Viscount entered into an exploration earn - in agreement with a wholly owned subsidiary of Centerra Gold Inc. Centerra is a Canadian-based gold mining company focused on operating, developing, exploring and acquiring gold properties in North America, Asia and other markets worldwide.

To view the source version of this press release, please visit https://www.newsfilecorp.com/release/109739