Toronto, Ontario--(Newsfile Corp. - November 8, 2021) - Advance United Holdings Inc. (CSE: AUHI) (FSE: 9I0) (the "Company" or "Advance United") is pleased to report that the preliminary ground VLF-EM geophysical survey at the Buck Lake Property has been completed and provides details and modern interpretation of part of the known 2,000 metre length EM anomaly.

The survey was completed over 900 metres of the known EM anomaly. The detailed survey also allowed for the identification of three (3) strong anomalies along the length of the identified anomaly (see Figure 1 below) which have not yet been drilled.

The results of the VLF-EM survey were used by the Company's field crews to locate the surface exposure of the massive sulphide zone intersected by the Noranda drilling in 1986. The massive sulphides exposed on surface include pyrite, pyrrhotite, and chalcopyrite and are hosted in a silicious "exhalite" unit. The field mapping also identified altered felsic and mafic volcanics on the western and eastern contacts of the massive sulphide zone respectively. These types of relationships are typical in known massive sulphide (VMS) deposits in other areas of the Abitibi Province such as Mattagami, Horne, and Glencore's Kid Creek Mine, the deepest base metal mine in the world.

The zone was well exposed by the prospectors and allowed the collection of 24 rock samples over approximately 200 metres. The location of the collected samples and their relationship to the EM anomaly can be seen below in Figure 1. The samples have been submitted for chemical analysis and results are pending.

"I am even more excited by the potential of the Buck Lake property after my recent field visit to the property." Advance United CEO Jim Atkinson states. "We were able to observe the massive sulfide exposures and see the mineralization present. Our field crews have been very successful with the program at Buck Lake. The methodology we have used consists of VLF-EM, followed by directed prospecting and sampling, and has been very successful. I believe this will be very useful and effective in exploring the remainder of the property including in the exploration program on the recently acquired claims as previously announced. We are preparing our next follow up work program to include these new areas and will be scheduling a follow up drill program in 2022. This demonstrates the purpose and value behind our business model to re-work existing data in known areas that supports, documents the potential, and allows us to increase quantifiable resources and reserves using current standards and modern technology, thereby increasing the value of the property and overall value of our portfolio of properties." 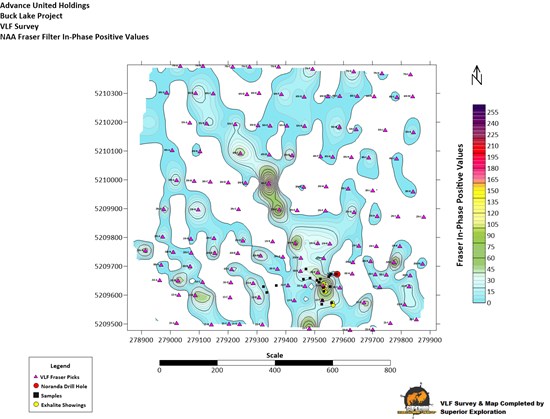 About the Buck Lake Property

The Buck Lake Property lies in the Batchawana Greenstone Belt within the Abitibi Subprovince of the Canadian Shield. Geologically the Buck Lake Property overlies the contact between mafic and felsic volcanics, a classic Volcanic Massive Sulphide (VMS) target. An EM anomaly identified trending North-South across the property, appears to be associated with the contact between felsic and mafic volcanic units.

A previous drillhole conducted by Noranda Exploration in 1987 along the Electromagnetic (EM) anomaly intersected two (2) zones of massive sulphide mineralization of 4.88 m and 4.72 m in thickness (as reported in the MNDM Assessment Report).

Both massive sulphide zones were described as containing copper and zinc mineralization although assays were not included in the available Assessment Report. Rock sampling during a soil geochemical program completed in 2017 identified copper mineralization in the form of chalcopyrite in rocks adjacent to the EM anomaly. A reconnaissance soil sampling program 2017 identified a 2,000-metre-long copper and zinc anomaly associated with the contact and the EM anomaly.

We are a different kind of Canadian junior mining company, one designed to succeed where other junior mining companies fail. We are involved exclusively in the acquisition and advancement of past projects - with no intent to bring them back into production or to mine them ourselves. Our expertise is in identifying and acquiring undervalued properties with significant historical work, which were uneconomic at the time, but we believe have economic value at today's prices.

Our purpose is to bring immediate and long-term value to our partners and shareholders while seeking to eliminate exploration risk, so that we can all advance united in the shortest possible time frame.

For additional information about us, our projects, or to find out how you can get involved please visit www.advanceunited.ca.

James Atkinson M.Sc., P. Geo., a Qualified Person ("QP") as such term is defined by National Instrument 43-101 - Standards of Disclosure for Mineral Projects, has reviewed and approved the geological information reported in this news release. The Qualified Person has not completed sufficient work to verify the historic information on the Buck Lake Property, particularly with regards to historical sampling and regional government-mapped geology. He did however supervise the soil and rock sampling program carried out on the property in 2017. The Qualified Person assumes that sampling and analytical results were completed to industry standard practices. The information provides an indication of the exploration potential of the Buck Lake Property but may not be representative of expected results.

This news release contains "forward-looking information" within the meaning of applicable securities laws relating to trading on the CSE and the focus of the Company's business. Any such forward-looking statements may be identified by words such as "expects", "anticipates", "intends", "contemplates", "believes", "projects", "plans" and similar expressions. Forward-looking statements in this news release include statements regarding the Company's ability to increase the value of its current and future mineral exploration properties and, in connection therewith, any long-term shareholder value, the Company's ability to mitigate or eliminate exploration risk, and the Company's intention to develop a portfolio of historic gold properties. Readers are cautioned not to place undue reliance on forward-looking statements. These statements should not be read as guarantees of future performance or results. Such statements involve known and unknown risks, uncertainties and other factors that may cause actual results, performance or achievements to be materially different from those implied by such statements. Although such statements are based on management's reasonable assumptions, there can be no assurance that the Company will continue its business as described above. Readers are encouraged to refer to the Company's annual and quarterly management's discussion and analysis and other periodic filings made by the Company with the Canadian securities regulatory authorities under the Company's profile on SEDAR at www.sedar.com. The Company assumes no responsibility to update or revise forward-looking information to reflect new events or circumstances or actual results unless required by applicable law.

To view the source version of this press release, please visit https://www.newsfilecorp.com/release/102434

Sign up to receive news releases by email for Advance United Holdings Inc. or all companies belonging to the Mining and Metals industry.