CORRECTION FROM SOURCE: Spearmint Applies for a Drill Permit on the 'McGee Lithium Project' in Clayton Valley, Nevada

Spearmint Resources Inc. is issuing a correction to its previously disseminated press release dated earlier today to include additional information.

Vancouver, British Columbia--(Newsfile Corp. - October 19, 2021) - Spearmint Resources Inc. (CSE: SPMT) (OTC Pink: SPMTF) (FSE: A2AHL5) (the "Company" or "Spearmint") wishes to announce the Company has applied for a drill permit from the Bureau of Land Management ("BLM") on the 'McGee Lithium Clay Project' in Clayton Valley, Nevada directly bordering Cypress Development Corp. and Pure Energy Minerals Limited. Earlier this year, on June 11, 2021, Spearmint received the technical report on its 100-per-cent-owned 'McGee Lithium Clay Project' which included a maiden resource estimate of 815,000 indicated tonnes and 191,000 inferred tonnes for a total of 1,006,000 tonnes of lithium carbonate equivalent (LCE). The technical report was prepared in accordance with the requirements of National Instrument 43-101 by Stantec Consultant Ltd.'s qualified persons (Allan Turner, PGeol, and Derek Loveday, PGeo). The goal of the upcoming drill program will be to increase the maiden resource estimate by following the drilling recommendations provided by Stantec in the Technical Report. Spearmint's two other lithium projects in Clayton Valley, Nevada include the recently acquired 'Green Clay Lithium Project' comprised of 97 contiguous claims totaling approximately 2,000 acres, and the 'Elon Lithium Brine Project' which has access to some of the deepest parts of the only lithium brine basin in production in North America. Lithium prices have recently broken out to all-time highs, having seen an approximate 100-percent surge since August 1, 2021, and are now up over 290-percent in 2021.

On October 13, 2021, Cypress Development Corp announced "the assembly of the pilot plant for the company's 100-per-cent-owned Clayton Valley lithium project in Nevada is complete. As seen on the map below, Cypress Development Corp. and Spearmint share this blanket-like, lithium-bearing claystone formation. Also, on August 17, 2021, Pure Energy Minerals Ltd. partner Schlumberger New Energy announced receiving approval from the Bureau of Land Management (BLM) for a plan of operations covering the construction and operation of a pilot plant at Pure Energy's Clayton Valley, Nevada, lithium brine project, which Spearmint directly borders. Management cautions that past results or discoveries on properties in proximity to Spearmint may not necessarily be indicative to the presence of mineralization on the Company's properties. 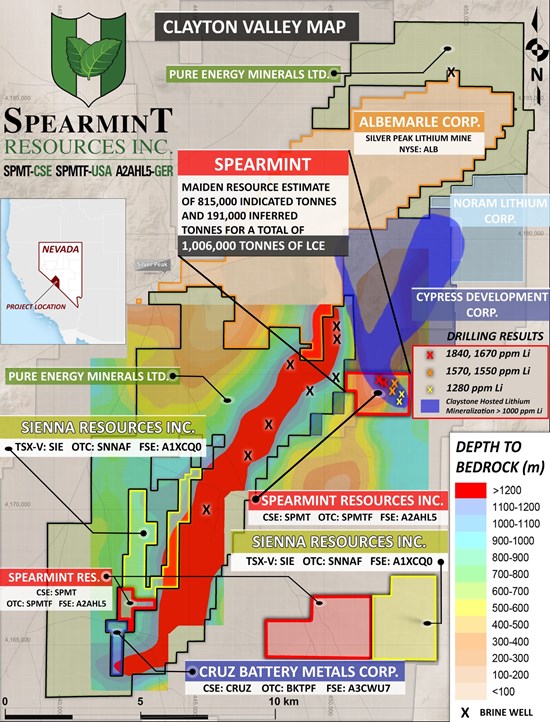 James Nelson, President of Spearmint Resources stated, "We are very pleased to have applied for a drill permit from the BLM for the 'McGee Lithium Clay Project' in Nevada. This project directly borders Cypress Development Corp. in Clayton Valley, Nevada, which is the premier address for lithium in North America. Since August 1st, 2021, lithium prices have gone parabolic, increasing over 100% and are now up over 290% since the beginning of 2021. Clearly, this is an opportune time to be recommencing operations on our lithium holdings in Clayton Valley, Nevada. A drill program is currently being formulated using the recommendations provided by Stantec in the Technical Report. With approximately $3 million in the treasury, we are well funded for multiple drill and work programs in the US and Canada with no need to raise additional funds. We look forward to building upon an already active and successful year. The remainder of 2021 and beyond will be an extremely active period for Spearmint with potential catalysts coming ahead on multiple projects."

Mr. Frank Bain, P.Geo., a Qualified Person as defined by National Instrument 43-101 has reviewed and approved the scientific and technical disclosure contained within this news release.

Additionally, the Company has granted six million stock options at an exercise price of fifteen cents to directors, officers and consultants of the company for a term of one year, pursuant to its rolling stock option plan.

Spearmint's primary projects include three lithium projects in Clayton Valley, Nevada; the 'McGee Lithium Clay Project' which has a maiden resource estimate of 815,000 indicated tonnes and 191,000 inferred tonnes for a total of 1,006,000 tonnes of lithium carbonate equivalent (LCE), directly bordering Pure Energy Minerals & Cypress Development Corp.; the 'Elon Lithium Brine Project' which has access to some of the deepest parts of the only lithium brine basin in production in North America; and the recently acquired 'Green Clay Lithium Project' comprised of 97 contiguous claims totaling approximately 2,000 acres.

Spearmint's other primary projects include the 'Goose' Gold project directly bordering New Found Gold Corp. where Spearmint has sampled up to 973 ppb gold, and the Perron-East Gold Project consisting of 5 mineral claim blocks covering 11,608 acres located in the Abitibi greenstone belt of northwestern Quebec in the direct vicinity of Amex Exploration Inc.'s Perron property and past-producing Normetal mine. For a complete list of Spearmint's projects please visit spearmintresources.ca. Management cautions that past results or discoveries on properties in proximity to Spearmint may not necessarily be indicative to the presence of mineralization on the Company's properties.

To view the source version of this press release, please visit https://www.newsfilecorp.com/release/100206