Vancouver, British Columbia--(Newsfile Corp. - October 2, 2019) - Ethos Gold Corp. (TSXV:ECC) (OTCQB: ETHOF) ("Ethos" or the "Company") is pleased to announce results from its Phase 1 drill program at Iron Point, 22 miles east of Winnemucca, Nevada. While Iron Point has received considerable previous drilling to depths of up to approximately 300 m, mainly in strata belonging to the Upper Plate ("UP") above the Roberts Mountain Thrust ("RMT"), this is the first program to test more favourable Lower Plate ("LP") strata for Carlin-Type gold mineralization to depths of up to 700 m. 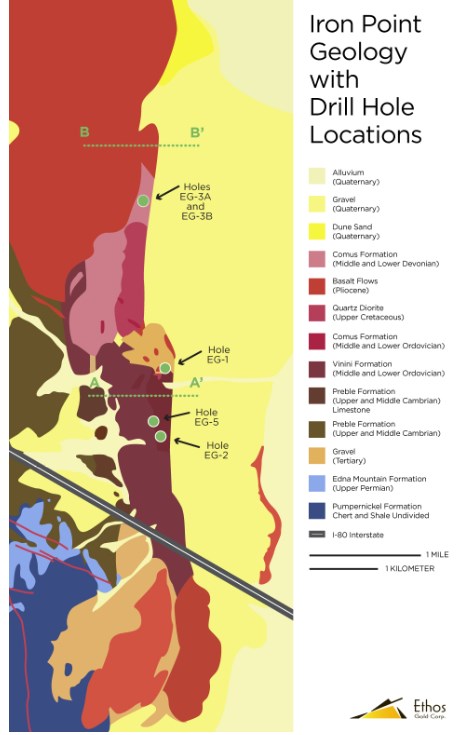 These first deep holes at Iron Point have provided valuable new geological information about the structure and potential ore bearing lithologies that are evidenced on surface with some of the strongest Carlin-type gold pathfinder element geochemistry in Nevada. Importantly, Ethos now has confirmation that LP rocks underlie most of the property. Ethos and Victory Metals will use this data, as well as assay pertinent Victory Metal drill holes for gold and pathfinder metals, to optimise the geological model at depth and vector towards potential higher grade gold as a basis for targeting Phase 2 drilling.

Stated Craig Roberts, P.Eng., President & CEO of Ethos: "We are very encouraged by the broad intervals of highly altered and folded lower plate stratigraphy with significant intervals anomalous gold encountered in this first pass drilling of prospective lower plate rocks at Iron Point. Our next phase of work will include compilation and three dimensional modelling of the new data in combination with the historical data with the intention of vectoring towards potential higher grade mineralisation in Phase 2 drilling."

Stated Dr. Quinton Hennigh: "In Carlin systems, gold grades can go from anomalous to ore grade in a short distance. We saw this pattern in a drill program I ran at Carlin for Evolving Gold Corp. We have proven that highly prospective and altered LP rocks occur at depth at Iron Point, and I am excited that we can now move toward the next phase of vectoring towards higher grade gold mineralization."

Ethos can earn a 50% interest in all precious metal rights at Iron Point by spending a minimum of C$5.0 million over three years, with minimum expenditures of C$1.0 million in the first year. Based on the Phase 1 program expenditures Ethos has now completed the first year earn-in expenditure requirements. Following the earn-in a 50-50 joint venture will be formed between Ethos and Victory. Victory will maintain 100% title to the Iron Point claims and on completion of its earn-in Ethos would have a contractual right to 50% of any precious metal discovery. The vanadium mineralization is near surface with significant spatial separation from the conceptual deeper gold target. Victory maintains the right to ensure that any precious metal exploration and development plans do not interfere with development of its vanadium project.

Ethos' strategy is to earn into potentially large, drill ready gold projects that can be drill tested over a shorter time frame with a relatively modest budget. Ethos' current projects include:

Ligneris (earning up to 70% from Vior Inc) is located 110 km north of Val-d'Or, Quebec. The project has a large mineralized surface expression, and approximately 200 holes drilled to approximately 300 m depth, with some significant gold drill intercepts. The project rocks and mineralization bear many similarities to Agnico's LaRonde complex. Ethos plans to drill test these targets commencing in late October 2019.

Perk-Rocky (earning 100%) is a large copper-gold porphyry target located 220 miles east of Williams Lake, British Columbia. A significant airborne geophysics survey along with ground sampling and mapping has now been completed, with interpretation of the geophysics anticipated shortly.

This press release contains certain "forward-looking statements" within the meaning of Canadian securities legislation. Although the Company believes that such statements are reasonable, it can give no assurance that such expectations will prove to be correct. Forward-looking statements are statements that are not historical facts; they are generally, but not always, identified by the words "expects," "plans," "anticipates," "believes," "intends," "estimates," "projects," "aims," "potential," "goal," "objective," "prospective," and similar expressions, or that events or conditions "will," "would," "may," "can," "could" or "should" occur, or are those statements, which, by their nature, refer to future events. The Company cautions that forward-looking statements are based on the beliefs, estimates and opinions of the Company's management on the date the statements are made and they involve a number of risks and uncertainties. Consequently, there can be no assurances that such statements will prove to be accurate and actual results and future events could differ materially from those anticipated in such statements. Except to the extent required by applicable securities laws and the policies of the TSX Venture Exchange, the Company undertakes no obligation to update these forward-looking statements if management's beliefs, estimates or opinions, or other factors, should change. Factors that could cause future results to differ materially from those anticipated in these forward-looking statements include the risk of accidents and other risks associated with mineral exploration operations, the risk that the Company will encounter unanticipated geological factors, or the possibility that the Company may not be able to secure permitting and other agency or governmental clearances, necessary to carry out the Company's exploration plans, and the risk of political uncertainties and regulatory or legal changes in the jurisdictions where the Company carries on its business that might interfere with the Company's business and prospects. The reader is urged to refer to the Company's reports, publicly available through the Canadian Securities Administrators' System for Electronic Document Analysis and Retrieval (SEDAR) at www.sedar.com for a more complete discussion of such risk factors and their potential effects

To view the source version of this press release, please visit https://www.newsfilecorp.com/release/48414