Vancouver, British Columbia--(Newsfile Corp. - April 19, 2022) - Playfair (TSXV: PLY) (FSE: P1J1) (OTC Pink: PLYFF) has acquired exploration rights on the 80.7 square kilometer Folldal Project directly from the Norwegian government by application to the Directorate of Mining. There are no underlying property deals or royalties. 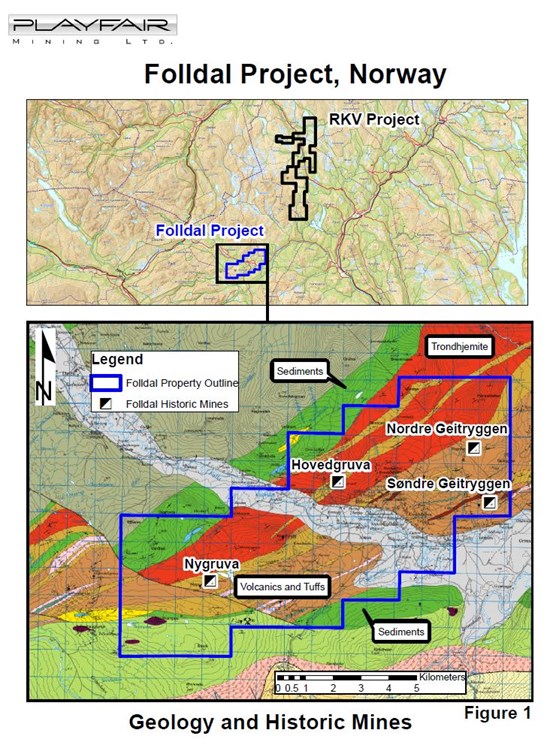 "Playfair has been exploring in Norway since 2019. Playfair's approach of applying modern technology to exploration of the RKV historic mining district has identified compelling new drill targets in underexplored areas. We are looking forward to drilling these targets this summer. Norway has many such underexplored districts with favorable geology. We are confident that a similar approach to selected properties, such as Folldal, will generate excellent targets for copper, zinc, and gold discoveries during a time of strong metal prices."

The former producing mines are described in The Norwegian Geological Survey's Ore Database as follows:

"The Folldal mine was opened already in 1747, and the first mining lasted until 1807. After that period, regular production was carried out in several periods until 1941. In total 1.15 mill.t. of ore with 1.9 % Cu and 1.1 % Zn was produced. The ore was very pyrite-rich and from 1907, pyrite was a very important product from this mine. The deposit is hosted by meta-basalt (locally pillowed), which is intruded by a large body of trondhjemite (dated to 488 Ma). The mineralization occurred in four separate lenses, of which the so-called main lens was the most important. The ore was mined to a depth of 600 m along plunge and 900 m along strike. The ore thickness was between 1-12 m (the main lens typically 3-12 m)."

"The Nordre Geitryggen mine produced 2.5 mill.t. of ore with 1.3 % Cu, 3.2 % Zn, 0.2 % Pb, 31 ppm Ag and 0.2 ppm Au, mainly between 1936 and 1970, and was the largest of the Folldal mines. The deposit is situated in banded chlorite schists, which are typical tuffitic rocks in the area. Thin lenses of felsic volcanics and volcaniclastics are inter-banded in the schists, as well as horizons of graphite schist. The ore zone has a strike length of 550 m, and was mined to a vertical depth of 550 m. The average ore thickness was 1.7 m but varied between 0.1 and 10.4 m because of folding. The ore was generally a banded pyrite-sphalerite-pyrrhotite-chalcopyrite ore with local enrichments of magnetite. The matrix was dominated by calcite and quartz."

"The Søndre Geitryggen deposit was in the earliest periods 1770-1848 and 1860-1878 mined for copper in the eastern part of the deposit where the copper grades were the highest (stringer zone), while copper, zinc and pyrite were mined in the western zinc-dominated part in the last mining period (1952-1965). In total c. 0.5 Mt of ore grading 0.8 % Cu, 2.4 % Zn was taken out, and the mine had a strike length of 400 m and a vertical depth of 165 m. Mining ended because workers were needed in the new, large mine at Tverrfjellet, not because the deposit was mined out. The deposit is situated in the upper parts of a 20-50 m rhyodacite lens, in contact with overlying tuffitic schists. The main massive ore is a banded pyrite-sphalerite ore."

Nygruva Mine. NGU Ore Database details can be found here

"Nygruva mine was in production in three periods from 1783 to 1952. In total 0.3 Mt ore was produced with 0.85 % Cu and 3.5 % Zn. The ruler-shaped deposit has a length of 680 m, width of 60-70 m and an average thickness of 3 m. Two normal faults cut across the deposit of which the westernmost one marks the end of the known deposit. Investigations (as late as in 1990) to find the continuation have not been successful. The massive part of the ore is a banded pyrite-sphalerite ore with lesser chalcopyrite and pyrrhotite in a quartz-calcite matrix. In the stratigraphic footwall of the massive ore are irregular lenses of zinc- or copper-rich ore, which locally are enriched in gold (up to 7.1 gpt)."

The technical contents of this release were approved by Greg Davison, PGeo, a qualified person as defined by National Instrument 43-101. All metal values, mining production tonnages and geological dimensions reported herein are strictly historical in nature, were derived from third party sources compiled by NGU and pre-date NI 43-101 guidelines. The Company and its Qualified Person believe that the data will withstand scrutiny for inclusion and provides a conceptual indication of the property potential relevant to ongoing mineral exploration.

To view the source version of this press release, please visit https://www.newsfilecorp.com/release/120666