As the nascent European legal cannabis market emerges, Canadian companies that have cut their teeth in their home markets are taking that experience overseas to capitalize on a much larger market opportunity. Supreme Cannabis is a model of how to build a successful cannabis portfolio at a blistering pace. And the way that they just made their move into Europe was savvy, to say the least.

There are about 37 million people in Canada. There are over 513 million people in the European Union, of which around 480 million citizens have access to medical cannabis in some way, shape or form. Of the 28 members of the E.U. (including the U.K. at this point), only Bulgaria, Hungary, Latvia, Slovakia and Sweden are still steadfast on cannabis being illegal in all forms, including cannabis-based drug derivatives. 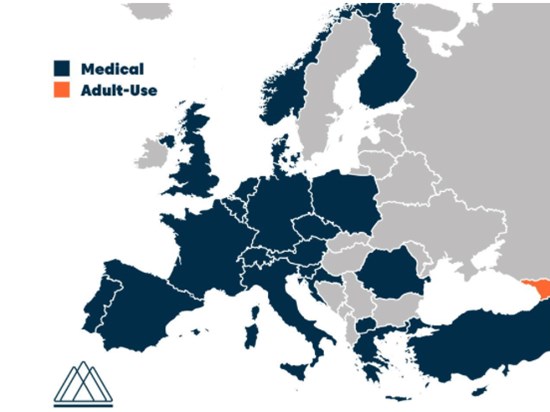 Canada is undoubtedly a global leader, cementing its position in history last year as the first industrialized country - and second country ever behind Uruguay - to legalize recreational marijuana for adults. The setting of the framework was invaluable to pioneering cannabis companies and management. When the dust settles in the future, the sheer volume of potential patients (>12x more) suggests that the European markets will be much larger than that of Canada, providing a once-in-a-lifetime opportunity to put that experience to use.

Like everything else cannabis, just how big the market will be is subjective, but it will be huge regardless of guesstimate. For example, in its 'The European Cannabis Report,' Prohibition Partners said earlier this year that it sees Europe as the world's biggest legal cannabis market in the next five years and reaching up to €123 billion (US$136.7 billion) by 2028.

Executional Excellence: This is How You Do It

In about three years, Supreme Cannabis has built and scaled its cannabis business in Canada, while more recently stepping into global markets through deals in Malta and Lesotho.

The Supreme portfolio currently consists of six subsidiaries, covering a swath of the cannabis industry, including IP discovery, cultivation, production (of multiple goods) and sales into eight Canadian provinces. Some of this has been organic growth, while some, such as the recent acquisitions of Truverra and Blissco, has been inorganic. The flagship brand in the family is 7ACRES, which expanded its cultivation capacity in just 12 months from 3,000 square feet to 230,000 square feet for production capacity of 33,580 kilograms.

Nothing speaks more clearly to the ability to scale than Supreme this month providing revenue guidance for the next year in the range of $150 million to $180 million. If it makes good on this guidance, Supreme will have become one of the top cannabis companies in the world based upon annual revenue in less than five years.

The robust growth is owed to management's ability to make prescient moves to stay in front of regulation changes in addition to operational excellence. This includes not only the recreational cannabis market as it stands today, but also the upcoming new laws in Canada anticipated for October.

The upcoming changes include cannabis extracts becoming available to Canadians. To position for market share, Supreme has partnered with PAX Labs, the top-selling pen-and-pod system in the U.S., for new premium pods for sale with the PAX Era systems in Canada. Supreme has also partnered with Wiz Khalifa's Khalifa Kush Enterprises Canada to bring the popular U.S. brand to Canadians.

Overseas, Supreme leadership made the prescient decision to strike a supply agreement and to invest $10 million in Medigrow Lesotho, a leading licensed medical cannabis oil producer in the Kingdom of Lesotho. Lesotho is a land-locked country surrounded entirely by South Africa, a country of 57 million that changed its laws in May to allow for legal sales of CBD (cannabidiol) products.

Patrick Morton, co-founder of Cannabis Invest UK, the leading cannabis investor conference in the country, has assumed the role of CEO of Supreme Heights with key members of existing Supreme Cannabis leadership joining the team. Morton has spent years developing an expansive network of local and global cannabis and CBD companies.

Getting Morton involved once again points to the savvy decision making of Supreme. In one fell swoop, Supreme Cannabis has gotten unfettered access to Morton's network, effectively giving it the opportunity to begin culling European companies for potential investments.

The relationship is bi-lateral for Supreme Cannabis. The obvious is investment arm and ROI that can result in high-margin revenue for the parent company by putting out its capital and lending some developmental and operational advice.

A second aspect was hit on by Morton when he said, "With guidance from Supreme Cannabis, we intend to make targeted investments in wellness brands that provide exposure to value-add categories in the UK and Europe's CBD market, including vaporizers, edibles and beverages, topicals and ancillary services."

On the surface, this can be taken just literally because Supreme has experience in all these facets of the business. A read between the lines signals that Supreme indeed intends to make investments in European companies, as well as using the relationships as inroads to more business to further support the top and bottom lines.

This is further understood with some "big picture" vision aggregating moves Supreme has made in the recent past. The acquisition of Truverra came with the company's European subsidiary, Netherlands-based Truverra (Europe) B.V., which already has small-scale sales of its eponymous hemp-derived CBD products through its established distribution channels in the U.K. and Netherlands.

Don't forget that Medigrow Lesotho, which already has over 400 employees, is building a facility expected to be an EU-compliant GMP facility for exports of CBD oils. Blissco's current facility was also built to be EU-compliant GMP and will be capable of producing over 7 million bottles of tinctures in the next few months.

Against this backdrop, it is Navdeep Dhaliwal, CEO of Supreme Cannabis, probably said it most concisely with, "We look forward to driving value for Supreme Cannabis shareholders through this investment platform."

Given the way Supreme took Canada by storm, it shouldn't come as any surprise that they will take an equally aggressive approach to tackle the much bigger European markets.

For additional information, visit the company's website at: https://www.supreme.ca/about-supreme-cannabis

Please follow the link to read the full article on CFN Media: http://bit.ly/2lw1o1Z

For Visitors and Viewers

CFN Media is a leading agency and financial media network dedicated to the cannabis industry. We help private, pre-public and public cannabis companies in the US and Canada attract capital, investors and media attention.

Our powerful digital media and distribution platform conveys a company's message and value proposition directly to accredited and retail investors and national media active in the North American cannabis markets.

Since 2013, CFN Media has enabled the world's preeminent cannabis companies to thrive in the capital and public markets.

Learn how to become a CFN Media client company, brand or entrepreneur: https://www.cannabisfn.com/featured-companies/public-companies/

The above article is sponsored content. CannabisFN.com and CFN Media, have been hired to create awareness. Please follow the link below to view our full disclosure outlining our compensation: http://www.cannabisfn.com/legal-disclaimer/

To view the source version of this press release, please visit https://www.newsfilecorp.com/release/47528

Sign up to receive news releases by email for CFN Media Group or all companies belonging to the Cannabis, Multimedia/Internet/Online Services industries.