While announcing their success, Doge King also mentioned their audit and KYC scanning. 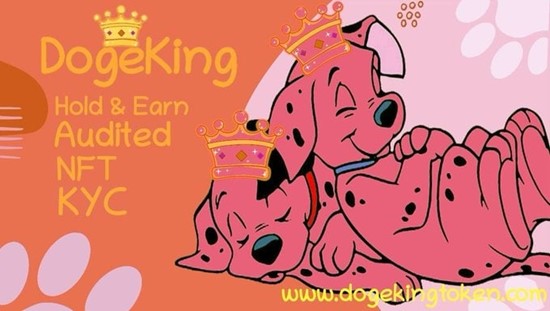 According to their web page, they intend to provide a self solvent meme token inspired by Doge. Doge King(DOGEK) leverages BEP-20 smart contracts based on the Binance smart chain.

Doge King started its presale intending to create a huge community backing. They planned to run this session till Thursday 11th. Unicrypt hosted this ILO whose target soft cap was around 100,000 BUSD, and the hard cap stood at 150,000 BUSD. But, the presale session ended shortly after starting on the 6th. DOGEK announced their success on their telegram and Twitter pages. It hit the hard cap.

Since this platform used the Unicrypt launchpad, locking liquidity was a must. According to Doge King's Twitter, 60% of the total BUSD raised in the ILO goes to Unicrypt lockers. Unicrypt will be holding a liquidity ock of around 90 thousand BUSD raised.

There were restrictions imposed on ILO participants. But, Unicrypt shows that this entire BUSD amount was bought by about 142 holders. While the presale participation was low, the numbers increased vastly on Pancakeswap. BSC scan statistics show that there are close to 2000 holders, and over 21 thousand transfers.

According to their website, Doge King intends to ensure this token has a 2000x potential. That is possible considering the price improvements in the past few hours. Dextool's analysis shows that the coin has already gained over 300% value since its launch.

Of course, the increasing numbers of investors contributed to the growth. But, there is more to this growth, according to Doge King. The token has a system that makes it deflationary while having excellent price floors. The 5% transaction tax used in rewards will help increase the value and demand of this token. Furthermore, by holding DOGEK investors stand a chance of earning daily rewards.

Aside from the ILO, Doge King announced the completed audit and KYC scanning. It may be hard for investors to have confidence in the project as a meme token. But, the audit helps increase trust in the long-term sustainability of the project.

Solidproof released the audit and KYC reports on November 3rd. On auditing, SolidProof did not discover any issues that could threaten users' investments. Hence, that shows DOGEK is a very secure contract.

Besides the audit, Solidproof also conducted a KYC scan on the Doge King team. The scan was done to ensure that the team has no connections to money-related frauds. Consequently, the KYC certification proved that DOGEK has a genuine team.

To view the source version of this press release, please visit https://www.newsfilecorp.com/release/102342