"I know it has been awhile since I have given an update. I have been working diligently with the new local accountants, Blue Chip Accounting, and its developer Think Latitude as well as on a variety of other tasks that you will soon learn about. I appreciate shareholders patience, and I plan to put out an announcement next week as well." --- CEO Joshua Sodaitis.

Think Latitude has been working diligently on the MobiCard app's Apple Authentication these last several weeks. This implementation has required a vast amount of testing time as Apple support has been very limited due to the current pandemic. The implementation of this authentication feature was mandated by Apple, per their new policy to add Apple Authentication into the iOS version of the MobiCard app, due to using other third-party login options, specifically Facebook and LinkedIn. Due to this mandate, MobiCard has amended its current statement of work with Think Latitude to add and accommodate this feature. While this feature was not an original requirement, it also adds extremely beneficial login options, such as biometric (fingerprint or iris) login options, which were originally scheduled to be rolled out in Phase 2.0.

Think Latitude faced a variety of security issues that needed to be addressed with this implementation, as user data is a critical measure of this app to provide security to all users. Major code changes needed to be made to accommodate this feature. As changes were being made to implement Apple Authentication with a high degree of security, provisioning the feature became increasingly complex for the average user, since allowing the sharing of the users' iCloud email address required them to get into their settings to allow access to the application.

Furthermore, it was determined by the Think Latitude QA team and MobiCard CEO, Joshua Sodaitis, that this feature needed to become more accessible to the average end-user, who is not as technologically savvy in order to make this mainstream rollout more seamless. This required an additional redesign where the end user can simply login directly from the app and made the process extremely easy for the average user.

While this implementation has made significant progress and is now complete, Apple recently phased out a critical library that displays objects in the app and is requiring developers to use a different library. Unfortunately, Apple will no longer allow apps to be uploaded to their app store that are still referencing the current library that MobiCard is using. This will require another major change in the code, as most objects displayed in the app rely on this library, and several rounds of additional and subsequent testing will be required after the implementation to ensure there are no issues with the app displayed objects on each section of the app. The timeline is still being determined for this implementation.

Despite this setback on library implementation, Think Latitude and MobiCard are very excited to make such progress on the iOS version of the application, and believe that the newly implemented biometric login features will allow even more people to sign up easily and become loyal and active users of MobiCard.

"We have been making tremendous progress on MobiCard, and the new login features along with the revised library will only make the application more secure, responsive, and accessible to MobiCard's end users." added Andy Sajnani, CEO of Think Latitude.

"I want to go to Beta-testing by September, my shareholders and myself are itching to get this released in Apple. The fact that we will have biometrics (fingerprint) Apple Authentication in this 1.0 version is a good thing. It will be a much easier process for people to sign up and obviously the easier it is to sign up the more users we hope to acquire. Being able to sign in through Facebook or LinkedIn only makes it easier too. The new issue about "libraries" will set the company back a month or two as the Think Latitude team has estimated, we are counting on the team at Think Latitude to address this immediately and thoroughly. Think Latitude is working hard, and I maintain conference calls with them regularly." CEO Joshua Sodaitis concluded. 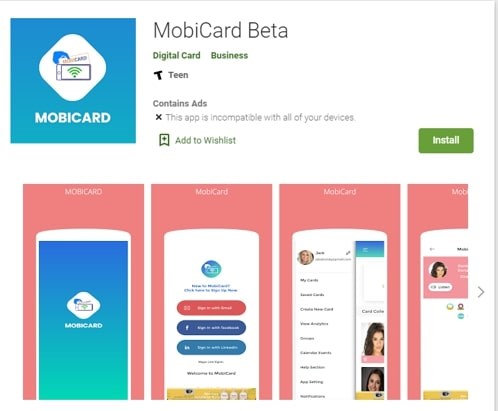 To view the source version of this press release, please visit https://www.newsfilecorp.com/release/59345