This technology is also covered by U.S. Patent No. 10,270,880, issued April 23, 2019. MobiCard is working diligently on additional patent applications to strengthen and improve the intellectual property for its electronic business card proprietary technology. 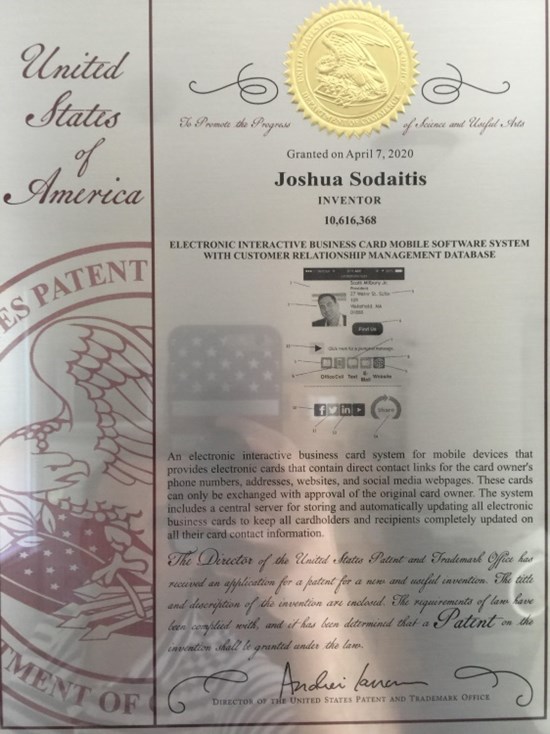 MobiCard Chairman & CEO Joshua Sodaitis commented "As the Chairman, CEO, and now an inventor I am proud of this mile stone being in the books as accomplished. MobiCard has filed a third patent before this one was officially granted. I intend to continue adding intellectual property assets that are directly added to the plus category, on the bottom line of MobiCard's financials balance sheet. MobiCard is worth more today than it was prior to this patent being granted. Advancing intellectual property assets into MobiCard is a direct result of lots of hard work behind the scenes that I believe will translate into more interest in MobiCard and its product. MobiCard's intellectual property assets surely differentiate it from any other company out there that would try to mimic us or compete with us, just wait to you see MobiCard's apps as they will blow anyone trying to compete with us out of the water."

MobiCard is in the process of trying to get its historical financials completed and audited, to file certain SEC reports in 2015, 2016 and 2017 prior to the date it de-registered with the SEC, and current financials (2018, 2019, & 2020) completed to report financials on OTC Markets and complete taxes. It is not free to get this goal accomplished and MobiCard will seek to raise additional capital to finish this project. MobiCard believes now is the time to get this next objective completed in the next two months if the company has adequate resources and funding to complete this task.

MobiCard knows that this new patent is a direct asset to the company. With the assets of the new technology platform and the new patent reflected on the financials once completed will be enticing for new shareholders while sending the exact message to the markets that would be advantageous for success.

Due to COVID-19, business is changing. The old archaic paper business card is soon to see its demise. MobiCard is to the old paper business card; what Gutenberg was to calligraphy when he developed the printing press. MobiCard believes that it is positioning itself to become the staple brand in an entirely new industry that will appeal to ever race, gender, and age demographic once in the professional world.

"If shareholders want the next big strategic goal to be completed of the financials it can be done as long as we are able to bring in the funding necessary to complete them. Now more than ever shareholders should help me, help them, so that we can all prosper together." Concluded Chairman and CEO Joshua Sodaitis.

To view the source version of this press release, please visit https://www.newsfilecorp.com/release/59914