"Romana Deep is a compelling target featuring a large HEM anomaly extending down-dip from Pan Global's La Romana copper discovery," said Tim Moody, Pan Global President and CEO. "Some of the strongest copper mineralization at La Romana exhibits a similar HEM signature and the copper mineralization remains open in the direction of the Romana Deep target. The first of four planned drill holes has commenced at Romana Deep. In addition, drilling continues to the north at the high priority Zarcita target."

The copper-tin mineralization at La Romana also coincides with HEM resistivity low anomalies, providing a further indicator of potential for additional copper mineralization associated with the Romana Deep HEM target. The target extends northwards from La Romana at a depth of approximately 300m and spans more than 1 km east-west. See Figures 2 and 3 below. An initial four drill holes, 150 to 350 meters apart, totalling approximately 2,000 meters are planned to test some of the strongest resistivity low anomalies within the broader target area. 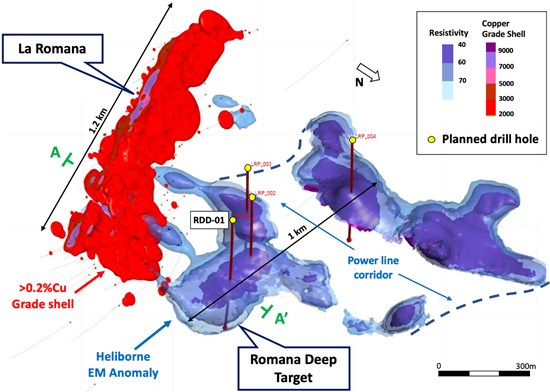 Figure 2 - Romana Deep Target: Oblique view looking to the west showing the north-dipping La Romana copper mineralization continuing down-dip towards the Romana Deep HEM target and four planned drill holes, including RDD01 currently in progress. A corridor through the Romana Deep target is shown without EM data due to interference from an overhead electricity power line. A-A' locates the cross section in Figure 3. 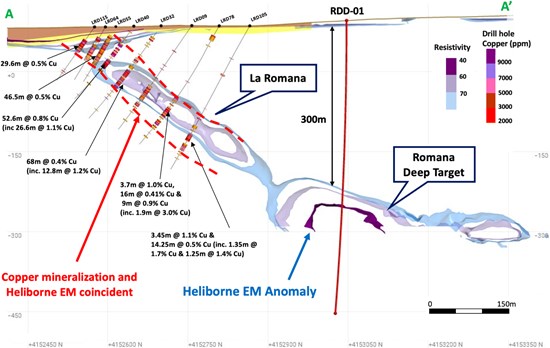 The number of initial planned drill holes at Romana Deep has doubled and will add to the planned 20,000-meter multi-target program outlined in the Company's news release dated September 28, 2022. A multi-hole drill program is continuing at the Zarcita target and drill results are expected to be reported in the coming weeks for the outstanding drill holes at La Romana and other targets at the Escacena Project.

About the Escacena Project
The Escacena Project comprises a large, contiguous, 5,760-hectare land package controlled 100% by Pan Global in the east of the Iberian Pyrite Belt. The project is located near operating mines at Las Cruces and Rio Tinto and is immediately adjacent to the former Aznalcollar and Los Frailes mines where Minera Los Frailes/Grupo Mexico is in the permitting stage to restart mining. The Escacena Project hosts the La Romana copper-tin discovery and a number of other prospective targets, including La Jarosa, Hornitos, Zarcita, Romana Deep, Pilar, Bravo and Barbacena.

About Pan Global Resources
Pan Global Resources Inc. is actively engaged in base and precious metal exploration in southern Spain and is pursuing opportunities from exploration through to mine development. The Company is committed to operating safely and with respect to the communities and environment where we operate.

Qualified Persons
James Royall, VP Exploration for Pan Global Resources and a qualified person as defined by National Instrument 43-101, has reviewed the scientific and technical information for this news release. Mr. Royall is not independent of the Company.

Statements which are not purely historical are forward-looking statements, including any statements regarding beliefs, plans, expectations or intentions regarding the future. It is important to note that actual outcomes and the Company's actual results could differ materially from those in such forward-looking statements. The Company believes that the expectations reflected in the forward-looking information included in this news release are reasonable but no assurance can be given that these expectations will prove to be correct and such forward-looking information should not be unduly relied upon. Risks and uncertainties include, but are not limited to, economic, competitive, governmental, environmental and technological factors that may affect the Company's operations, markets, products and prices. Readers should refer to the risk disclosures outlined in the Company's Management Discussion and Analysis of its audited financial statements filed with the British Columbia Securities Commission.

To view the source version of this press release, please visit https://www.newsfilecorp.com/release/144205