Vancouver, British Columbia--(Newsfile Corp. - October 6, 2022) - Commander Resources Ltd. (TSXV: CMD) ("Commander") is pleased to report that it has begun an initial 1,000 meter drill program at its Burn Copper and Gold porphyry project in British Columbia (the "Burn Property"). Freeport-McMoRan Mineral Properties Canada Inc. ("Freeport") is earning into the Burn Property and Commander is the operator of the project. In addition, Commander has expanded the Burn Property through an option agreement with private tenure holders allowing Commander to acquire a 100% interest in two claims totaling 127 hectares ("ha"). The Burn Property, which covers 17,675 ha property, is located 100 km north of Smithers, British Columbia and was acquired directly by Commander in 2018 to cover prominent gossans exposed along ridges.

The Burn Property is located within the Babine Porphyry belt 70 km north of two past producing mines at Bell and Granisle (Figure 1, attached below). Initial work at Burn in 2018 identified widespread phyllic-style alteration with trace amounts of chalcopyrite. There is no record of previous geophysical surveys or drilling. Past work by Commander, funded by Freeport, included a property wide airborne magnetic survey (200 m spaced flight lines) which has outlined two prominent circular magnetic rings and several linear magnetic highs that coincide with stocks and dykes of Eocene age (Figure 2, attached below). A property-wide sampling program of stream sediment sampling, soil and rock sampling, and geological mapping has identified four alteration zones of which the largest is referred to as the Central zone.

The Central zone, the focus of this year's drill program, is underlain by numerous phases of feldspar-biotite-hornblende monzonite and quartz monzonite dykes and stocks exhibiting alteration from chlorite to chlorite-magnetite, and moderate quartz-sericite-pyrite (QSP) to intense QSP with local quartz veinlets. In one location, angular boulders of K-feldspar-biotite-magnetite altered feldspar-biotite porphyry monzonite with sheeted and stockwork magnetite-quartz veins with K-feldspar haloes was discovered. Reconnaissance soil sampling in the Central zone has identified several anomalous Au-Cu and Mo areas including one discrete region on the west side where three samples over a distance of 300 m returned 500 ppb Au to 3900 ppb Au (Figure 3, attached below). Silt sampling from one of the north flowing creeks draining the Main zone returned anomalous Cu-Mo-Au throughout.

Freeport has been granted the right to earn up to a 75 % interest in the Burn Property through staged option payments and work expenditures. To earn an initial 51% interest, Freeport must make payments totalling $260,000 by August 2023 and complete $1,000,000 in exploration expenditures. Upon vesting at 51%, Freeport may elect to sole fund an additional $1,500,000 in exploration expenditures and make three annual payments of $100,000. The companies would then enter a 75% Freeport/25% Commander Joint Venture. If either party dilutes to less than a 10% interest, then that interest would be replaced with a 1% net smelter return royalty ("NSR"). Commander is the operator until Freeport vests at 51% interest. (See news dated July 25, 2019 for further details). Separately and independent from Commander, Freeport has entered into an agreement with ITOCHU Corporation to co-fund the earn-in obligations.

Analytical work was completed by Bureau Veritas in Vancouver, BC. Gold was analyzed by fire assay fusion of a 30-gram aliquot and other elements by ICP-ES from a 4-acid digestion. Soil and Silt samples ( -80 mesh fraction) were analysed by ICP-ES from aa aqua regia digestion. Grab rock samples are selective by nature and may not represent the true grade or style of mineralization. Samples were collected in the field by Stephen Wetherup, P. Geo.

Robert Cameron, P. Geo. is a qualified person within the context of National Instrument 43-101 and has read and takes responsibility for the technical aspects of this release. All fieldwork completed to date and on-site supervision of the current drill program is by Stephen Wetherup P. Geo., Commander's Vice President of Exploration.

Commander Resources is a Canadian focused exploration company that has leveraged its success in exploration through partnerships and sale of properties, while retaining equity and royalty interests. Commander has a portfolio of base and precious metal projects across Canada. Commander also retains royalties from properties that have been partnered, optioned or sold. 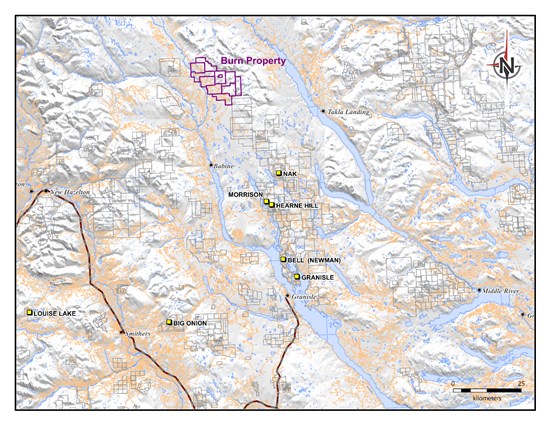 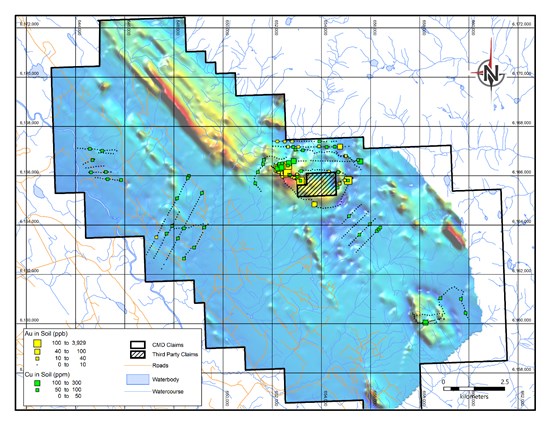 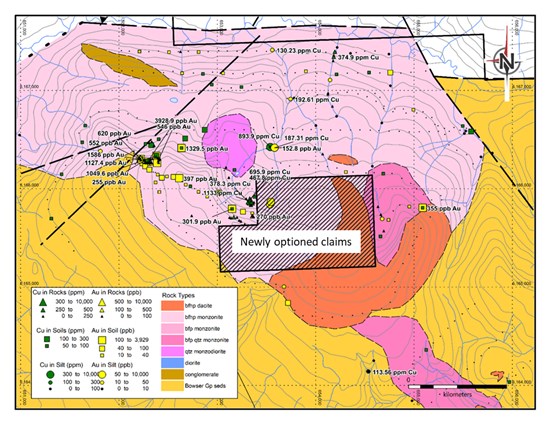 To view the source version of this press release, please visit https://www.newsfilecorp.com/release/139731