San Francisco, California--(Newsfile Corp. - June 6, 2022) - Gala Games, a game studio focused on Web3 entertainment, has announced its new title GRIT for the Epic Games Store, which hosts more than 194 million users worldwide. GRIT is a battle royale, third-person shooter set in the age of the Wild West and was made using the Unreal Engine.

Players get an aerial view of their surroundings while parachuting into a new location, and they can choose to go into fights alone, in pairs, or in groups with showdowns occurring in a range of places across the open world map, from in town while riding on horseback to running along steam engine train tops. Players can traverse the open world with personalized in-game avatars, and with the game's Perk System, they have the option to customize their loadouts using collectible wildcards found throughout the world. GRIT has over 400 old school gun variations and over 20 different weapons available for players to arm themselves with.

Another of GRIT's key features is its day-night cycle, adding a new tactical challenge for players to navigate through as they escape the roving storm and fight to be the last one standing. The horses also double as additional inventory, and each mount can run at a variety of speeds.

Currently, GRIT is only available on the PC through the Epic Games Store. 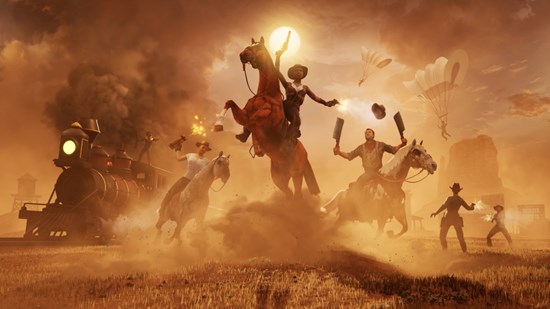 Team GRIT is a new game development and publishing company established by veteran industry insiders Bob Berry and Jon Mavor, creators of Planetary Annihilation and Monday Night Combat. Based out of Seattle, the development team is committed to making fun and engaging titles that bring players together, starting with their first game GRIT, an Old West battle royale.

Gala Games is a Web3 games company that uses decentralization, player ownership, and reward economies to create a new way of gaming. With dozens of games on the horizon and several already in various stages ranging from pre-sale to beta release, Gala is tackling the unique market of "own-your-experience" gaming. To learn more about GRIT, please visit https://grit.game/. To discover more titles produced by Gala Games, please visit https://app.gala.games/, or contact:

To view the source version of this press release, please visit https://www.newsfilecorp.com/release/126649

Sign up to receive news releases by email for Imperium Group or all companies belonging to the Publishing/Informational Services industry.