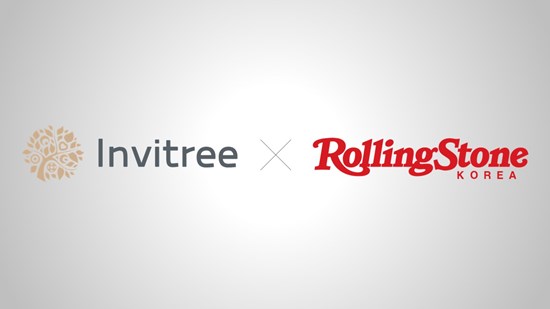 Rolling Stone Magazine is a representative pop culture biweekly in the U.S. and has been run by Jan Wenner and music critic Ralph Gleeson since 1967, including new album reviews and charts, starting with rock band interviews, and has become a media in various fields.

Rolling Stone Korea was founded in May 2021 and is receiving much attention and love from domestic and foreign fans, consistently recording best sellers in the domestic magazine field. It dealt with internationally famous stars such as BTS, Kang Daniel, Rain, CL, and Adele, and interviews with numerous artists such as Lim Young-Woong, Monsta X, Yoon Sang, YB, and Kim Wan-sun drew attention.

"In this strategic partnership with Rolling Stone Korea, we decided to cooperate in planning and to produce high-quality NFT content. We will aim for the luxury market by utilizing solid networks such as the U.S., Northeast Asia, and Southeast Asia" said Jaedu Sim, the CEO of INVITREE.

The INVITREE project is currently listed on the BigOne and XT.com exchanges and is promoting projects such as NFT and Metaverse to continue expanding and expanding its business.

To view the source version of this press release, please visit https://www.newsfilecorp.com/release/120857

Sign up to receive news releases by email for MediaR3 or all companies belonging to the Advertising, Blockchain, Virtual Reality, Technology industries.