EverGrow Coin The Next Big Cryptocurrency, Reaches 60K Holders and $1 Billion in Marketcap

Newark, Delaware--(Newsfile Corp. - October 31, 2021) - A relatively new cryptocurrency is trying to reach the moon, like Bitcoin, Ethereum, and Dogecoin before it. After an 18000% rally in the past month, the total value of all circulating EverGrow Coin crossed the $1 billion mark today, according to data provider Coingecko.com. Known as" EGC" to a growing army of retail investors, EverGrow Coin also has been dubbed by many analysts as the Next Shiba Inu or Dogecoin. EverGrow debuted in September and has received increased buzz recently due to its unique Tokenomics. All holders of EGC earn an 8% reward from every Buy/Sell Transaction in USD(BUSD), sent automatically to the holder's wallet. 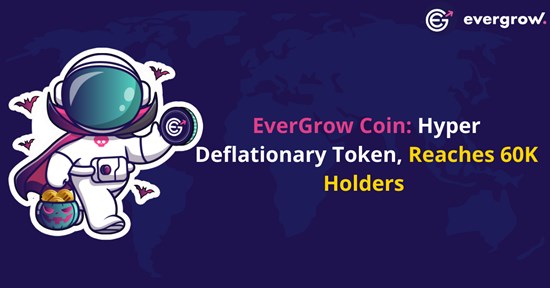 In just one month of Launch, EverGrow Coin already has surpassed 60,000 holders mark $1 Billion in Marketcap. Excluding the Token price gains, Holders of EverGrow Coin have received more than $10 million BUSD just in rewards. ​​EverGrow Coin is also twice as rewarding as the nearest competition and every holder gets a far greater share in rewards. On launch, half of the token total supply was burned and removed permanently from circulation, and a further 2% has been burned since. The Airdrop and Team Wallet, a further 5%, are locked and do not receive rewards. This means the rewards are distributed amongst just 44% of the total coins.

8% in BUSD: With each Buy or Sell transaction, EverGrow Coin distributes 8 percent of those transactions to all token holders directly in their wallets. The rewards are sent in Stable currency BUSD. Rewards in BUSD mean holders don't have to sell their holdings and pay taxes to book profits.

4% is added Automatic to Liquidity: To ensure the exchange's liquidity, the 4% from each buy and sell transaction will be transferred to PancakeSwap. PancakeSwap resolves the common liquidity issue with decentralized exchanges employing the concept of liquidity pools. A liquidity pool is always the tradeable tokens such as $EverGrow or $BNB. All Buy/Sell trades are matched with liquidity pools. A bigger Liquidity Pool means a stable price floor for the token.

Buy Back and Burn: 3% tokens are collected from every transaction, converted to BNB, and are sent to our contract. This wallet is known as BuyBack Wallet, when enabled it purchases EGC from exchanges and removes the purchased tokens permanently from circulating supply while making green candles on the price chart...

Anti-Whale Mechanism: EverGrow Coin also has an anti-Whale program in place. A 1% additional charge is added to all sales, which decreases the number of transactions that involve swing trading and Whale manipulation. Furthermore, the smart contract will not allow simultaneous sales that exceed 0.2 percent of the total supply.

NFT Ecosystem and other utilities: The team behind EverGrow plans to develop several products in its Ecosystem to increase the utility of EGC Token, as stated in the roadmap. This will include Binance Smart Chain-based NFT Marketplace and Content Subscription Platform. The team takes this as an essential factor and knows it is necessary, which is mainly overlooked by many similar projects, who have relied on hype & endorsements to grow the price, rather than actual utilities that will encourage people to own and use the coin.

Compared to more established coins, EverGrow Coin is a piker. Its market cap was $1 billion, versus $32 billion for Shiba Inu and Dogecoin which shows the serious growth potential for Crypto in the future.

To view the source version of this press release, please visit https://www.newsfilecorp.com/release/101481

Sign up to receive news releases by email for Global Releasewire or all companies belonging to the Multimedia/Internet/Online Services, Advertising industries.