Defiance to Drill Lucita at the Company's Zacatecas Project

Vancouver, British Columbia--(Newsfile Corp. - October 1, 2021) - Defiance Silver Corp. (TSXV: DEF) (OTCQX: DNCVF) (FSE: D4E) ("Defiance" or the "Company") is pleased to announce that it will be commencing a drill campaign on the regional exploration targets at Lucita on the company's Zacatecas project. Drilling is scheduled to commence on or around October 10th and will initially be focused at Lucita South, which includes the Palenque, El Puerto, and the Tahuares vein structures. 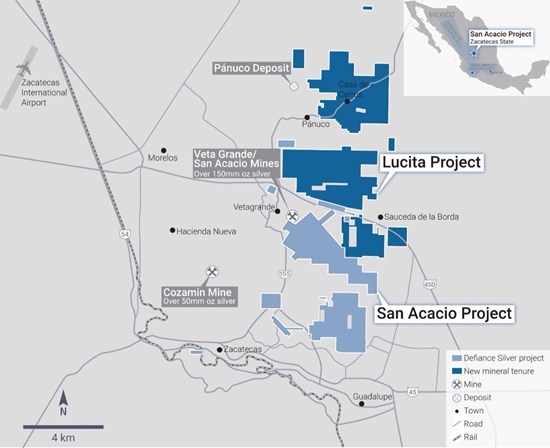 The Lucita project is under option from Pan American Silver ("Pan American") (See news release dated December 2nd, 2020). The Lucita project includes two licence areas - North and South - and contains numerous drill-ready exploration targets over a large (>20km2) project area (Figure 1). The Lucita North license area encompasses the Panuco vein system. The Panuco system is being drilled by nearby operator Zacatecas Silver Corp. on their portion of the Panuco vein system, located west of Defiance's licence area; Zacatecas Silver has recently published an historic Inferred 43-101 resource estimate for their portion of the Panuco vein system. That resource estimate is on strike with historical high-grade drilling done by Pan American within Defiance Silver's optioned tenure area. Pan American has previously drilled a number of holes in the Panuco area and returned encouraging results. At Panuco, there remain a number of undrilled vein targets marked by outcropping veins, stockworks, and breccias with historical shafts and underground workings.

The southern portion of the Lucita land package contains the multi-kilometre Palenque vein system, which is undrilled and remains a high-priority exploration target. Defiance Silver intends to test the Palenque structure with a series of drill holes. Other targets in the area include the El Puerto target, also under option from Pan American Silver, as well as the Tahuares Vein target, which lies within the San Acacio licenses. 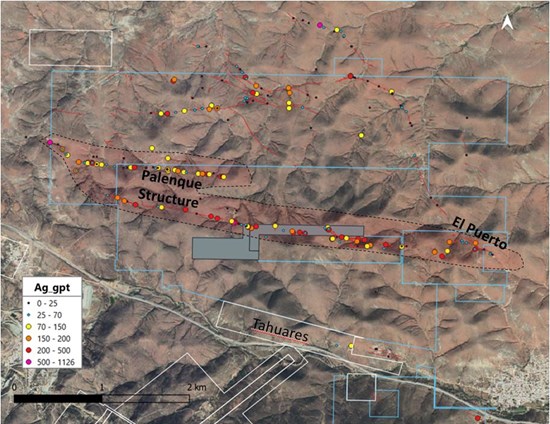 The Lucita project is characterized as a low to intermediate sulphidation Ag-Au vein, breccia, and stockwork system with historical high-grade drill results and drill-ready exploration targets. There are at least 10 known mineralized structures over a vein strike length of approximately 20 km, including the drilled on-strike extension of the Panuco Deposit (19m oz AgEq using a 100 g/t AgEq Cutoff), currently being drilled by Zacatecas Silver Corp. The veins in the northern license area have a continuous length of 4km and have widths from 0.20m to 4m. Historical drilling of these veins from 20 holes completed by Pan American in 2011-2012 returned encouraging results including 3.35m of 325 g/t Ag from hole LU11-16 and 1.25m of 775 g/t Ag from drill hole LU11-9. The composition of the epithermal veins at Lucita is quartz, calcite and occasionally minor barite, where colloform and crustiform-banded textures can be seen, belonging to various mineralization events. The company believes the previously-drilled structures intersected high-level epithermal mineralization, as mineral zonation at surface suggests that the top of the hydrothermal system is still present at the on-strike Panuco deposit.

Pan American has carried out geological mapping, sampling, and two drilling campaigns in the northern "Panuco" license area. Phase I drilling in 1996 comprised 10 holes and 1,409.85 metres of drilling. Phase II drilling was carried out in late 2011 and early 2012, comprising 20 drill holes with 3,693.41 metres drilled. Both drill campaigns intersected mineralized veining typical of a high-level epithermal system.

Panuco hosts a historic Inferred mineral resource estimate of 3,954,729 tonnes at 153 g/t AgEq based on a 100 g/t AgEq for 19,472,901 Ag Eq ounces (see the Technical report titled: Independent Technical Report on the Zacatecas Properties, Zacatecas State, Mexico prepared by Pearson and Morales-Ramirez dated December 20, 2020, which is available on Sedar and the Zacatecas Silver website). The Company states that its qualified person has been unable to verify the information on the Panuco property and that the information is not necessarily indicative of the mineralization on the Company's Lucita property.

Zacatecas State continues to be the top producer of silver in Mexico and is one of the reasons Mexico remains the world's largest silver-producing region. The Zacatecas-Fresnillo Silver Belt is one of the most prolific silver producing areas in the world. Production at the San Acacio mine dates to at least 1548 when Spanish colonialists mined mainly bonanza oxide ores, typically grading in excess of 1kg/tonne Silver. The various veins were mined intermittently until the mid-1800s when an English company drove the ~2km Purisima tunnel to allow for deeper underground access and drainage. From the late 1800s until the Mexican Revolution in 1920, mining consisted of intermittent production from bonanza grade ores. During the Mexican Revolution, heavy fighting in the Zacatecas region led to the halt of most mining endeavors. In the mid 1920s, a cyanide plant targeting silica rich ores and a floatation plant for complex Pb-Zn ores were built with varying success until the transition from oxide to sulphide rich ores made for recovery complexities. In the mid-1930s the first tonnage estimate was created on the property, although the project sat mostly idle save for some stope and adit rehabilitation at Purisima and Refugio. Production was largely dormant except for some small processing done by CIA Fresnillo in the late 1930s to early 1940s. In the mid-1990s Silver Standard Resources Inc. began a systematic exploration and evaluation program targeting an open pit silver mine consisting of backfill, remaining stopes and silica-rich hanging wall and footwall mineralization of the Veta Grande structure. This entry by a publicly-listed company kicked off nearly 3 decades of exploration, development, and bulk-scale processing.

Defiance Silver has been exploring the project since 2011 and has focused primarily on identifying near-term mine resources. Drilling by previous operators as well as Defiance Silver from 2009 to early 2017 confirmed the presence of significant mineralizing events that provide evidence for a long-lived mineralizing system. Drilling in late 2017 and early 2019 outlined complexities in the structural geology of the area and identified significant "down dropped" and rotated structural blocks as the company tested the Veta Grande at similar elevations where it was encountered by earlier mining and drilling.

Defiance announces that, subject to regulatory approval, it has retained Red Cloud Securities Inc. to provide its market stabilization and liquidity services to the Company in compliance with the policies and guidelines of the TSX Venture Exchange ("TSX-V") and other applicable legislation.

On behalf of Defiance Silver Corp.

Chairman of the Board

To view the source version of this press release, please visit https://www.newsfilecorp.com/release/98217

Sign up to receive news releases by email for Defiance Silver Corp. or all companies belonging to the Mining and Metals, Precious Metals industries.