Vancouver, British Columbia--(Newsfile Corp. - September 30, 2021) - ALX Resources Corp. (TSXV: AL) (FSE: 6LLN) (OTC: ALXEF) ("ALX" or the "Company") is pleased to announce that it has acquired the McKenzie Lake Uranium Project ("McKenzie Lake", or the "Project") in northern Saskatchewan, Canada. McKenzie Lake consists of four mineral claims purchased from an arm's length vendor group, and a fifth mineral claim staked by the Company, giving the Project a total area of 6,916 hectares (17,089 acres). McKenzie Lake is located near the eastern margin of the Athabasca Basin approximately 20 kilometres (12.5 miles) north of the Company's newly acquired Javelin Uranium Project, and about 55 kilometres (34 miles) southeast of the McArthur River Uranium Mine. 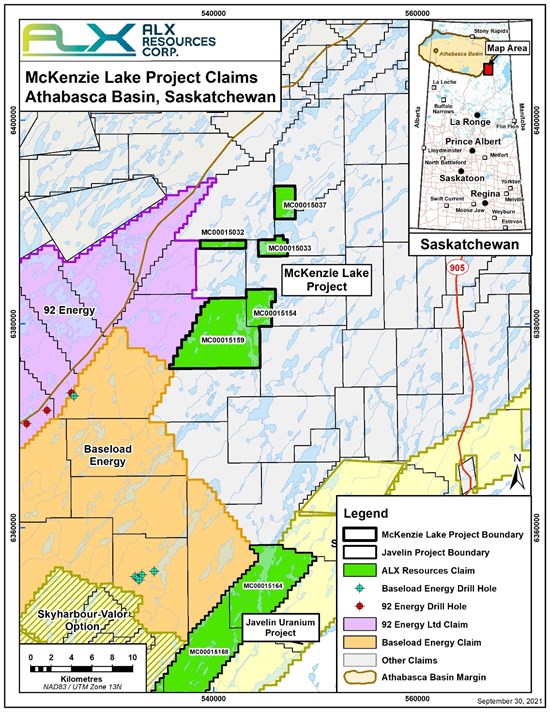 McKenzie Lake is located outside of the eastern margin of the Athabasca Basin within the central parts of the Wollaston Domain basement rocks, which host prolific uranium mines such as Key Lake, McArthur River, Cigar Lake and Rabbit Lake, amongst others. Two recent discoveries of note have been made in the McKenzie Lake-Javelin area, immediately to the southwest of the McKenzie Lake claims. The first is a discovery by 92 Energy Ltd. at their Gemini Project, where strongly anomalous basement-hosted uranium mineralization was intersected in drill hole GEM-004. More recently, and in close proximity to the discovery of 92 Energy Ltd., Baseload Energy Corp. reported the intersection of a broad zone of anomalous radioactivity in their 2021 drill hole HK21-07.

ALX has staked several other claims in the McKenzie Lake-Javelin area, which will be announced once mineral tenure is formally granted by the Government of Saskatchewan.

Details of the Transaction

ALX has agreed to pay a vendor group (the "Vendors") $7,500 cash and 250,000 common shares of ALX for a 100% interest in four of the McKenzie Lake claims (the "Purchased Claims") totaling 2,458.6 hectares. ALX staked a fifth claim totaling 4,457.6 hectares, which brings the total Project area to 6,916 hectares (17,089 acres). The Vendor will retain a 2.0% net smelter returns royalty, 1.0% of which can be purchased by ALX at any time for $1.0 million. The acquisition of the Purchased Claims is subject to acceptance by the TSX Venture Exchange.

The technical information in this news release has been reviewed and approved by Jody Dahrouge, P.Geo., a Director of ALX, who is a Qualified Person in accordance with the Canadian regulatory requirements set out in National Instrument 43-101. Historical geochemical results and geological descriptions quoted in this news release were taken directly from third party news releases. Management cautions that results reported by third parties on adjacent properties have not been verified nor confirmed by its Qualified Person, but ALX believes they create a scientific foundation for the exploration of McKenzie Lake. Management further cautions that historical results or discoveries on adjacent or nearby mineral properties are not necessarily indicative of the results that may be achieved on ALX's mineral properties.

ALX also owns 100% interests in the Firebird Nickel Project (now under option to Rio Tinto Exploration Canada Inc., who can earn up to an 80% interest), the Flying Vee Nickel/Gold and Sceptre Gold projects, and can earn up to an 80% interest in the Alligator Lake Gold Project, all located in northern Saskatchewan, Canada. ALX owns, or can earn, up to 100% interests in the Electra Nickel Project and the Cannon Copper Project located in historic mining districts of Ontario, Canada, the Vixen Gold Project (now under option to First Mining Gold Corp., who can earn up to a 100% interest in two option stages), and in the Draco VMS Project in Norway.

To view the source version of this press release, please visit https://www.newsfilecorp.com/release/98098