These advancements in the design of the Affinity™ System follow a robust and rigorous design of experiments aimed at stress testing the system and a complete redesign of the Affinity™ System including the operating hardware. The upgraded systems will allow for increased throughput, with a smaller and simpler design than originally contemplated. The upgraded system will consist of a four-column configuration, as opposed to the twenty-column configuration originally contemplated. This simpler configuration, coupled with the previously reported improvements in bead capacities, should result in a number of improvements to the system and its capabilities:

Eliminating conventional distillation product loss of up to 15% from inefficient processing temperatures has the potential to significantly improve economics for Affinity System customers. 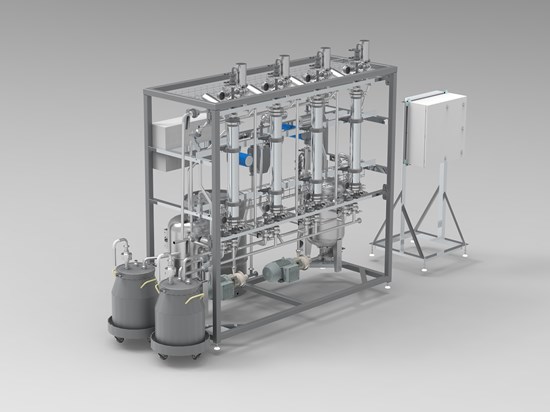 The above rendering is the current design of the system, subject to final refinements resulting from the commissioning process

Construction of Sixth Wave's initial pre-production units including the two pilot systems and the first full Affinity™ System (all expected to be completed and put in service before the end of the year) continues at AESI, under the supervision of Mr. John Cowan, SIXW's Chief Operating Officer. The first of two pilot systems entered wet testing on September 23, 2021. Once stress testing is completed, upgraded, and validated Affinity™ molecularly imprinted polymer (MIP) beads will be loaded into the system. The pilot system, expected to be delivered to Green Envy Extracts, will be a simplified, two-column system, capable of producing up to 15kg of high purity distillate. The four-column system is expected to be capable of producing up to 30kg of distillate per day.

Sixth Wave is a nanotechnology company with patented technologies that focus on extraction and detection of target substances at the molecular level using highly specialized Molecularly Imprinted Polymers (MIPs). The Company is in the process of a commercial rollout of its Affinity™ cannabinoid purification system, as well as IXOS®, a line of extraction polymers for the gold mining industry. The Company is also in the development stages of a rapid diagnostic test for viruses under the Accelerated MIPs (AMIPS™) label.

Sixth Wave can design, develop and commercialize MIP solutions across a broad spectrum of industries. The company is focused on nanotechnology architectures that are highly relevant for detection and separation of viruses, biogenic amines, and other pathogens, for which the Company has products at various stages of development.

For more information about Sixth Wave, please visit our website at: www.sixthwave.com

To view the source version of this press release, please visit https://www.newsfilecorp.com/release/97943

Sign up to receive news releases by email for Sixth Wave Innovations Inc. or all companies belonging to the Mining and Metals, Cannabis, Technology, Healthcare and Hospitals industries.