Vancouver, British Columbia--(Newsfile Corp. - September 23, 2021) - ALX Resources Corp. (TSXV: AL) (FSE: 6LLN) (OTC: ALXEF) ("ALX" or the "Company") is pleased to announce that it has acquired by staking the Javelin Uranium Project ("Javelin", or the "Project") in northern Saskatchewan, Canada. Javelin consists of nine mineral claims encompassing 23,652 hectares (61,073 acres), located near the eastern margin of the Athabasca Basin about 65 kilometres (40 miles) southeast of the McArthur River Uranium Mine. The Javelin claims are 100% owned by ALX with no underlying royalties.

Javelin was acquired during a recent staking rush that began in mid-September, 2021 (see claims map below). ALX acted quickly to acquire several projects in environments considered favorable for uranium mineralization around the Athabasca Basin, before staking activity peaked. 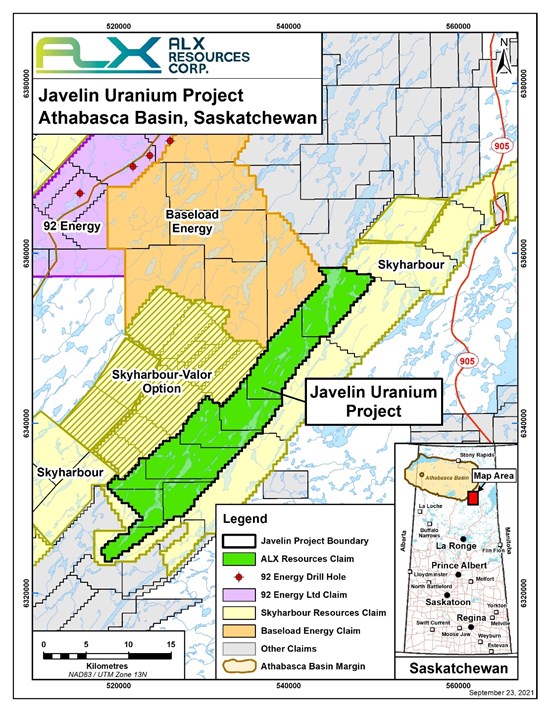 Javelin is located outside of the eastern margin of the Athabasca Basin within the central parts of the Wollaston Domain basement rocks, which host prolific uranium mines such as Key Lake, McArthur River, Cigar Lake and Rabbit Lake, amongst others. New basement-hosted uranium is actively being explored for around the Athabasca Basin, outside the basin edge, where, for example, the Triple R deposit ("Triple R") was discovered by a joint venture at Patterson Lake, SK between ALX's predecessor company, Alpha Minerals Ltd., and Fission Energy Corp (now Fission Uranium Corp.).

Recently, high-grade uranium mineralization has been sampled east of the Athabasca Basin, within the vicinity of Javelin, on surface by Valor Resources Limited, and in an exploratory drillhole on 92 Energy Ltd.'s Gemini Project.

The technical information in this news release has been reviewed and approved by Jody Dahrouge, P.Geo., a Director of ALX, who is a Qualified Person in accordance with the Canadian regulatory requirements set out in National Instrument 43-101. Management cautions that historical results or discoveries on adjacent or nearby mineral properties are not necessarily indicative of the results that may be achieved on ALX's mineral properties.

ALX also owns 100% interests in the Firebird Nickel Project (now under option to Rio Tinto Exploration Canada Inc., who can earn up to an 80% interest), the Flying Vee Nickel/Gold and Sceptre Gold projects, and can earn up to an 80% interest in the Alligator Lake Gold Project, all located in northern Saskatchewan, Canada. ALX owns, or can earn, up to 100% interests in the Electra Nickel Project and the Cannon Copper Project located in historic mining districts of Ontario, Canada, the Vixen Gold Project (now under option to First Mining Gold Corp., who can earn up to a 100% interest in two option stages), and in the Draco VMS Project in Norway.

For more information about the Company, please visit the ALX corporate website at www.alxresources.com or contact Roger Leschuk, Manager, Corporate Communications at: PH: 604.629.0293 or Toll-Free: 866.629.8368, or by email: rleschuk@alxresources.com.

Statements in this document which are not purely historical are forward-looking statements, including any statements regarding beliefs, plans, expectations or intentions regarding the future. Forward-looking statements in this news release include: the Javelin Uranium Project ("Javelin") is prospective for uranium mineralization; the Company's plans to undertake exploration activities at Javelin, and expend funds on Javelin. It is important to note that the Company's actual business outcomes and exploration results could differ materially from those in such forward-looking statements. Risks and uncertainties include that ALX may not be able to fully finance exploration at Javelin, including drilling; our initial findings at Javelin may prove to be unworthy of further expenditure; commodity prices may not support exploration expenditures at Javelin; and economic, competitive, governmental, societal, public health, environmental and technological factors may affect the Company's operations, markets, products and share price. Even if we explore and develop Javelin, and even if uranium or other metals or minerals are discovered in quantity, Javelin may not be commercially viable. Additional risk factors are discussed in the Company's Management Discussion and Analysis for the Six Months Ended June 30, 2021, which is available under the Company's SEDAR profile at www.sedar.com. Except as required by law, we will not update these forward-looking statement risk factors.

To view the source version of this press release, please visit https://www.newsfilecorp.com/release/97376