Vancouver, British Columbia--(Newsfile Corp. - August 31, 2021) - Sienna Resources Inc. (TSXV: SIE) (OTC Pink: SNNAF) (FSE: A1XCQ0) ("Sienna" or the "Company") is pleased to announce results from its recently executed drill program at its 100% owned Bleka Gold Project (the "Project") in Norway. Seven drill holes were completed at the Project for a total of 1,474 meters. Six drillholes were designed to test extensions of the mineralized "Main Vein" at depth and along strike from the historic Bleka Mine (see Figure 1). A seventh hole targeted an outcropping quartz vein swarm located approximately one kilometer from the historic Bleka Mine (the Espelid target). Sienna's maiden drill program confirmed extensions of the vein systems along strike and at depth, and intersected multiple quartz veins with pervasive quartz-albite alteration halos and elevated gold and copper values.

Gold mineralization at Bleka is hosted by muti-stage quartz veins with locally intense albite-carbonate alteration of wall rocks. Gold is associated with bismuthinite, chalcopyrite and pyrite according to historic accounts from mining activities and as seen in Sienna's drill holes. Although it had been mined for many decades, little to no recent exploration has been conducted on the Project area. A drill program had been planned for the Project in the late 1990's, but was not executed, and no other records of exploration drilling have been located by the Company. To its knowledge, Sienna is the first company to drill the Project in the past 40-50 years. The company is now formulating a plan for the next phase of operations on the Bleka project.

A total of 151 samples were cut at the ALS laboratory in Mala, Sweden where the samples were crushed and pulverized before they were shipped to be analyzed at the ALS laboratory in Ireland. The samples were analyzed with a 4-Acid digestion and multi-element mass spectrometer analysis. Gold was determined by fire-assay methods. Sampling was done in accordance with NI 43-101 protocols. Regular duplicate samples are taken and regular check samples such as blank material as well as certified reference material is inserted into the samples stream. 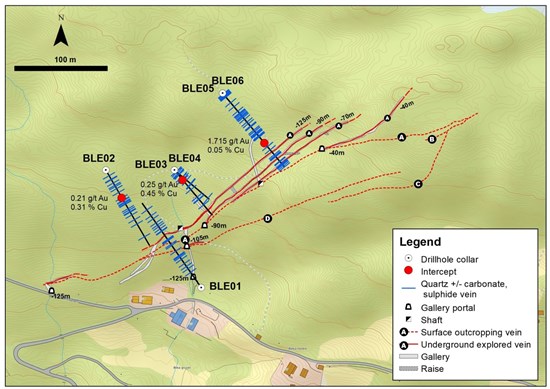 Figure 1: Location of drill holes and intercepts in the vicinity of the historic Bleka Mine

Sienna Resources is focused on exploring for and developing high-grade deposits in politically stable, environmentally responsible and ethical mining jurisdictions. Sienna is partnered with a New York Stock Exchange-listed mining company on two separate projects in Scandinavia including the past-producing Bleka and Vekselmyr orogenic gold projects in southern Norway which are both greenstone-hosted gold systems, and the Kuusamo platinum group elements (PGE) project in Finland directly bordering the LK Project being advanced by Palladium One Mining Inc. In North America, Sienna's projects include the Marathon North platinum-palladium property in Northern Ontario directly bordering Generation Mining Ltd.'s 7.1-million-ounce palladium-equivalent Marathon deposit. Sienna also has the Clayton Valley Deep Basin Lithium Project in Clayton Valley, Nev., home to the only lithium brine basin in production in North America, in the direct vicinity of Albemarle Corp.'s Silver Peak deposit and Tesla Motors Inc.'s Gigafactory. Management cautions that past results or discoveries on properties in proximity to Sienna may not necessarily be indicative to the presence of mineralization on the company's properties.

[1] Insufficient drilling and modelling has been completed to definitively determine the true thicknesses of the intercepts. The reported intercepts are as seen and measured in drill core and are drill intercept lengths.

To view the source version of this press release, please visit https://www.newsfilecorp.com/release/95047