The Oldham Inlier forms part of a basement high in the north-western part of the Officer Basin. Initial exploration work was completed by the Geological Survey of Western Australia followed by initial soil and geophysical surveys by several operators between 2001 and 2014. The MYR drill program will be the first drilling ever undertaken on the Property. 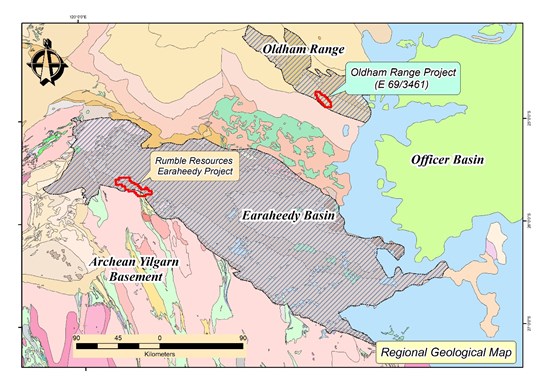 The geological consultants conducted a three-day geological reconnaissance site visit with the objectives of:

It was confirmed that the Oldham Range project licence E69/3461 covers part of a basement rock inlier located in the north-western part of the Officer Basin consisting of a moderately south-southwest dipping succession of clastic sedimentary rocks (sandstones, siltstones and shales). The rock succession consists of alternating intervals of fluvial to shallow-marine sandstones several tens of meters think interbedded with shale beds and thin, several meters thick beds of wackes (feldspar-dominated sandstones).

There was no major stratigraphic change recognised that would suggest a major change in the depositional environment. The geological work also suggested that the geophysical anomalies are related to magmatic bodies that have not penetrated to the surface.

A large gossanous outcrop located in the central northern area of the permit was investigated (Figure 2). The gossan outcrop area measures about 120 m by 30 m and show a network of sub-vertical cross cutting veins of highly ferruginous rock after sulphides. About 20m-spaced rock chip samples were collected across the area. Field testing of the gossanous material with the handheld XRF indicated anomalous concentrations of zinc, lead and copper. Samples have been submitted to Intertek Laboratory in Kalgoorlie for analysis.

All areas considered to drill testing will be accessible for drilling after minor earthworks. 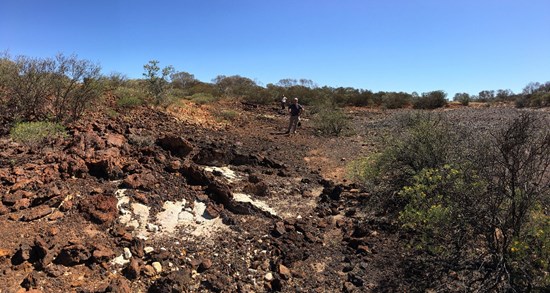 Meryllion Resources Corp. is a junior exploration company listed on the Canadian Securities Exchange. The Corporation undertook a re-structuring and financing in early 2021 and is now investigating a number of exploration opportunities with drill-ready targets.

The technical disclosure in this release is based on information prepared by Dr. Simon Dorling who is employed by RockDomain Consulting. Dr. Dorling is a member of the Australasian Institute of Geoscientists (Member Number: 31021). Dr. Dorling has sufficient experience which is relevant to the style of mineralization and type of deposit under consideration and to the activity which they are undertaking to qualify as a Competent Person as defined in the 2012 Edition of the JORC Australasian Code for Reporting of Exploration Results, Mineral Resources and Ore Reserves. Dr. Dorling consents to the inclusion in the release of the matters based on their information in the form and context in which it appears.

Neither CSE nor its Regulation Services Provider (as that term is defined in the policies of the CSE) accepts responsibility for the adequacy or accuracy of this release.

NOT FOR DISTRIBUTION TO U.S. NEWSWIRE SERVICES OR FOR DISSEMINATION IN THE UNITED STATES.

To view the source version of this press release, please visit https://www.newsfilecorp.com/release/94289

Sign up to receive news releases by email for Meryllion Resources Corporation or all companies belonging to the Mining and Metals industry.