Vancouver, British Columbia--(Newsfile Corp. - August 9, 2021) - Sienna Resources Inc. (TSXV: SIE) (OTC Pink: SNNAF) (FSE: A1XCQ0) ("Sienna" or the "Company")  announces that 8 anomalies have been identified from the recently completed high-resolution UAV (Drone) magnetic survey at the Kuusamo Platinum Group Elements (PGE) Project in Finland (the "Property" or "Project"), directly bordering the LK PGE-Ni-Cu Project being advanced by Palladium One Mining Inc. These 8 distinct areas of total field ("TMI") and first derivative magnetic anomalies have been selected as high priority for follow up through prospecting and geochemical soil survey. These new target areas are outside of the magnetically anomalous area where we have outcropping of layered ultramafic-mafic intrusion in the Pirinjarvi block (see map below). Soil sampling will now be completed over the new magnetic anomalies to determine the highest priority drill targets, beyond the main Pirinjarvi intrusive block. 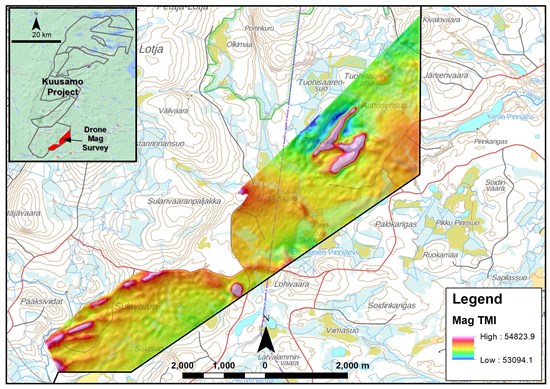 Jason Gigliotti, president of Sienna stated, "We are very pleased with the drone magnetic survey results that resulted in multiple new magnetic anomalies on the Property. We are now taking the next step with groundwork to determine the highest priority drill targets. We are very optimistic regarding our future plans for this exciting PGE property that directly borders the LK PGE-Ni-Cu Project, being advanced by Palladium One Mining Inc., who have had tremendous success to date using a similar methodical exploration approach. Not only are we excited about the Kuusamo PGE Project in Finland, but we are also awaiting assays back from our Bleka gold project in Norway. We also expect to shortly commence a second phase of exploration on our Marathon North platinum-palladium property in Northern Ontario, which directly borders Generation Mining Ltd.'s 7.1-million-ounce palladium-equivalent Marathon PGE deposit. Clearly this is a transformational period for Sienna."

Sienna Resources is focused on exploring for and developing high-grade deposits in politically stable, environmentally responsible, and ethical mining jurisdictions. Sienna is partnered with a New York Stock Exchange-listed mining company on two separate projects in Scandinavia including the past-producing Bleka and Vekselmyr orogenic gold projects in southern Norway which are both greenstone-hosted gold systems, and the Kuusamo platinum group elements (PGE) project in Finland directly bordering the LK Project being advanced by Palladium One Mining Inc. In North America, Sienna's projects include the Marathon North platinum-palladium property in Northern Ontario directly bordering Generation Mining Ltd.'s 7.1-million-ounce palladium-equivalent Marathon deposit. Sienna also has the Clayton Valley Deep Basin Lithium Project in Clayton Valley, Nev., home to the only lithium brine basin in production in North America, in the direct vicinity of Albemarle Corp.'s Silver Peak deposit and Tesla Motors Inc.'s Gigafactory. Management cautions that past results or discoveries on properties in proximity to Sienna may not necessarily be indicative to the presence of mineralization on the company's properties.

The technical content in this news release has been reviewed and approved by Dr. Scott Jobin-Bevans, P.Geo., an independent geological consultant who is a qualified person under the definitions established by the National Instrument 43-101.

To view the source version of this press release, please visit https://www.newsfilecorp.com/release/92371.