Toronto, Ontario--(Newsfile Corp. - July 7, 2021) - CERRADO GOLD (TSXV: CERT) ("Cerrado" or the "Company") is pleased to announce the results from a further nineteen drill holes (totalling 2,868 m) from its ongoing 12,000-metre exploration drill program at its Minera Don Nicolás Project ("Minera Don Nicolás" or the "MDN Project") located in Santa Cruz province, Argentina. Reported diamond drill holes were collared at the Esperanza/Rocio and other Paula Andrea targets. As previously outlined, the focus for the current 12,000-metre district exploration program is to delineate new high grade mineralized zones and increase confidence, of near surface mineralization in the proximity of Cerrado's mining operations: La Paloma and Martinetas Pits. Results are actively being integrated into further economic studies for ultimate conversion of additional resources into the mine plan.

The 2021 exploration drill program at the Minera Don Nicolás Project commenced on February 5th at and has targeted initially areas within the Paloma area and the adjacent Paula-Andrea Area, including: Baritina, Chulengo, Antena, Esperanza and Rocio. Results from the first two target areas were released in May of this year.

The drill results reported in this press release include all assays received as June 25th, 2021 and represent complete for file holes from Esperanza/Rocio, nine holes from Antena, and five holes from the Chulengo and adjacent NW corridor target.

Mark Brennan, CEO & Co-Chairman commented, "We are very pleased that the initial drill results at Minera Don Nicolas continue to support our view that significant near surface and near mine targets remain to be defined. As these new targets are more fully defined, we believe they have the potential to support not only adding additional resources but potentially increasing the grade of the overall resource base, supporting production in the future."

Current Near Mine Drill Program at MDN

The near mine exploration program at Minera Don Nicolas is comprised of 12,000 metres of diamond drilling. As June 25th, 6675 meters have been completed. The program is focusing mainly on step-out and downdip drilling to target extensions of gold mineralization and infill drilling to upgrade resources. The initial areas of focus for the program follow mainly exploration targets that have been defined by limited historical drilling, such as the Esperanza South vein at Paloma and the Paula Andrea Area (e.g. Baritina, Chulengo and Araña targets).

Given that these targets are close to the current, high grade, La Paloma mining area they are ranked as high priority in order to potentially add new resources that subsequently undergo economic evaluation by the mine team. The current program is in addition to RC drilling undertaken by the mine for infill and grade control to extend the current mining areas of La Paloma and Martinetas both along strike and at depth.

Drilling in the La Paloma adjacent areas is expected to be completed early in July. The diamond rigs will then mobilize to the Martinetas area. As is the case in La Paloma, drilling priorities in Martinetas will consider the proximity and economic viability of the different targets in the proximity of the Cerro Oro and Coyote Pits. The distribution of the footage of this years program, for which the ultimate scope is to gain confidence on the extent and economics of the satellite structures, aims to keep the balance of the resource inventory between the two main operations that Cerrado currently mines.

The Esperanza veins are part of the La Paloma system characterized by discrete narrow, arcuate, steeply dipping quartz breccia veins. The most notable structure within this system is the Sulfuro vein currently being mined by Cerrado. Esperanza is located west of Sulfuro, the northern segment of the 1km continuous strike vein was shallowly mined prior to Cerrado acquisition of Minera Don Nicolas.

Current drilling at Esperanza has focused on the southern zone of the vein system. The Esperanza vein system dips 75 degrees to the east (toward the Sulfuro vein) and has an average thickness of 0.3m to 6m. The five holes reported here, totalling 499m (see Figure 1) systematically intercepted also at depth the Rocio vein (slightly oblique with respect to Esperanza). Seven additional holes drilled at the Esperanza/Rocio veins are pending results. Preliminary modelling suggests stronger mineralization and gold tenor along the domain where both veins coalesce (sub vertical linear feature).

Importantly, the Esperanza structure is thought to coalesce with the main Sulfuro vein at an absolute depth of ~ 450 metres. The geometry of the predicted structural intersection is sub horizontal in nature and could be the loci of relevant additional gold endowment. This structural/mineralization model hypothesis remains drill untested but will be tested in the near future.

Drilling results at close space centers are being integrated in the updated long-term model and economically evaluated by the mine team for potential reserve conversion. 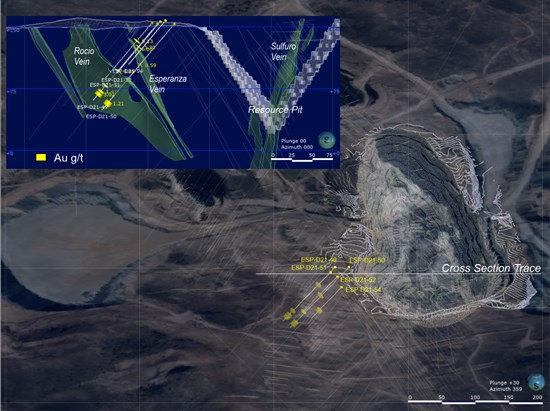 The Antena target is located 1,250m to the SSE of the Sulfuro pit. The width of the structure varies from 1m to 2m and consists of cryptocrystalline quartz veins and vein breccias with sulphides (pyrite, sphalerite, molibdenite ± galena). Textures features include breccias, massive and banding. Surrounding the veins massive-cryptocrystalline-quartz-sulphides stockworks develop as halos. The structures are dipping to the west between 70º to 80º and some of them are subvertical. Post-mineralization tectonic breccias are common affecting the veins, vein-breccias and stockworks, and probably represents the reactivation of the syn-mineralization faults. Also, the presence of post-mineralization low-angle dipping faults are interpreted and dislocates the mineralization (see Section below)

The 8 drill holes reported for the Antena target, totalling 1776 m, provide the first confirmation of continuity of mineralization below surface on this target and represent a new discovery. Refinement of the 3D modelling will be completed to better understand the geometry and grade potential size of these structures. 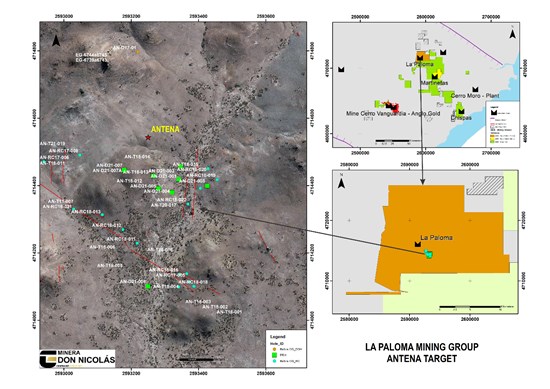 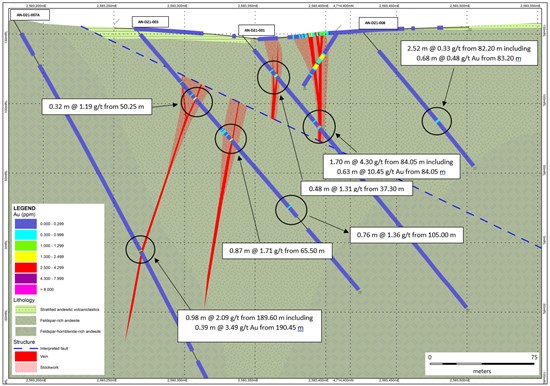 Drill holes PA-D21-66 and PA-D21-67 completed in Chulengo did not intersect relevant mineralization, missing the gold endowed zones of the breccia/ledges domains. Chulengo mineralization is characterized by silica-sulfide cemented hydrothermal breccias and ledges with vuggy silica textures infilled by sulfides (oxides) and controlled by ENE-WSW to E-W faults dipping to the north. Also, the mineralization shows a lithological control forming dissemination and fine veinlets/stockworks in permeable lithologies. 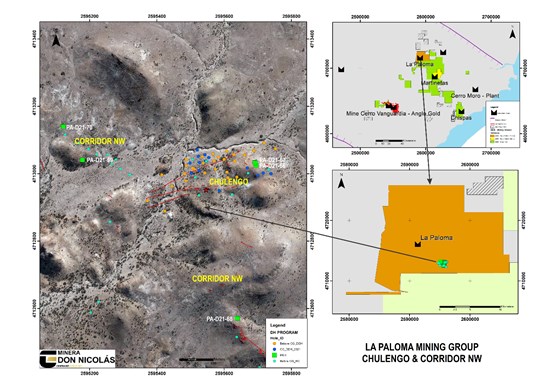 Drill hole PA-D21-68 was drilled ~ 500 m to the south of the Chulengo breccias and intercepted anomalous gold values resembling some of the proximal halos found in the Baretina target. Further field work will be completed to assess need of follow-up drilling.

The results obtained confirm that the structures in Chulengo form "rosaries or possible extensional jogs" along the ENE-WSW corridor. In domains with efficient structural opening there is a better continuity of gold mineralization hosted by hydrothermal breccias with a matrix of quartz and sulfides that cut the entire volcanosedimentary sequence (ignimbrites and volcanoclastics) providing better vertical extent and overall economics significance as a possible near mine satellite.

Araña mineralization is characterized by Fe-Mn oxides, barite and cryptocrystalline quartz veinlets and stockworks and sectors with vuggy silica textures infilled by oxides). The main recognized structure has a NE-SW orientation, and the host rock is a rhyolitic dome. Figure 5 shows the trenches intersections and the interpretation of the ore bodies at surface and high-grade zones.

Notable trench results in Arana include 4.80 m grading 4.09 g/t Au (PA-T21_029) and 9.40 m grading 5.06 g/t Au (see Figure 5 and table 2). These encouraging results will be follow-up with shallow diamond drilling. Drill pads have been prepared and drilling should commence in July as part of the current phase. 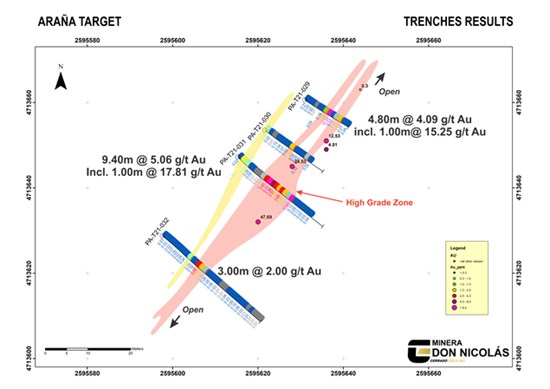 Analytical work was carried out Alex Stewart international, Argentina S.A. Labs (ASI). The facilities of the prep lab and assay lab are in San Julian, 184 Km from MDN mine operations. MDN sends out 10% of samples to check at ALS international labs (ALS) with the prep lab located in Mendoza and assay labs in Lima, Peru and Vancouver, Canada. In the main laboratory ASI (Mendoza), the samples are systematically analyzed for gold (ppm) and silver (ppm) by fire assay (Au4-50 + AgICP-AR-39) regarding the over limits with fire assay results greater than 10 ppm, a second assay is applied including gravimetric finishing (FA50GRAV), with respect to silver, analyzes greater than 200ppm are carried out by AgFA50GRAV.

To view the source version of this press release, please visit https://www.newsfilecorp.com/release/89585

Sign up to receive news releases by email for Cerrado Gold Inc. or all companies belonging to the Banking/Financial Services, Mining and Metals industries.