International Drilling Company ("IDC"), from Senegal, conducted a 142-hole (6,354 metres) air-core drilling program to test the gold potential associated predominantly with soil anomalies, on Madini. The holes were sited, based on the previously reported soils and termite gold anomalies, and have been drilled to a maximum depth of 60 metres.

The assay results highlight some very remarkable intercepts, which warrant follow-up exploration. The best intercept reported was 3.98 g/t Au over 2 metres, and there were a number of interesting continuous lengths of lower grades that intercept from section to section. These intercepts appear to define a NNW-SSE trend, within the regionally defined Siribaya-Bambadinka trend. The results from all assays from the drilling programme have been received and validated.

"The results of this initial early-stage exploration gold program have come back with some compelling and positive assay results, which are exciting as they correlate well to the gold-in-soil and VTEM geophysical anomalies. These preliminary results are very encouraging and certainly warrant further exploration, particularly given the evidence that this ties into a larger regional system that hosts a tier one gold trend," noted Govind Friedland, Executive Chairman. 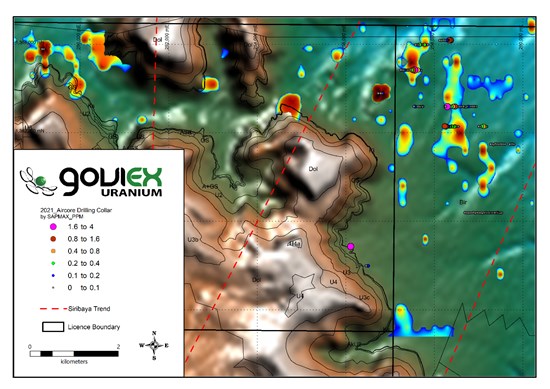 Closer analysis of VTEM data collected in 2011, but recently inverted by Intrepid Geophysics, shows that the anomalous gold grades from the drilling are closely associated with a conductive structure (See Figure 2). This seems to indicate an apparent structure associated with potential wrench faulting. These are known to host tensional gashes that often host gold mineralisation. 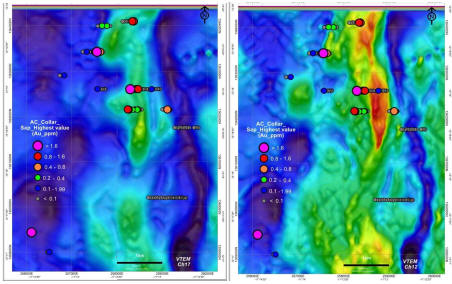 To view an enhanced version of Figure 2, please visit:
https://orders.newsfilecorp.com/files/5017/87065_goviex2.jpg

Table 1: Summary of gold intercept above 0.5ppm cut off

The technical content of this press release has been reviewed and approved by Mr. Jerome Randabel, MAIG, Chief Geologist of GoviEx, a Qualified Person as defined in NI 43-101.

Usual sample collection was carried out at the drill rig. A sample was collected at every two metres drilled and was split down to 2.5kg sample. These were assigned unique sample numbers and sent as batch to ALS process laboratory in Bamako, which will then be then sent to Ouagadougou, for assay.

For QAQC purposes Standard Samples - 2 different ones, Blanks and Duplicates were inserted every 20 samples. Any anomalous results were queried with the lab.

Forward-looking statements are subject to various risks and uncertainties concerning the specific factors disclosed here and elsewhere in GoviEx's periodic filings with Canadian securities regulators. When used in this news release, words such as "will", "could", "plan", "estimate", "expect", "intend", "may", "potential", "should," and similar expressions, are forward- looking statements. Information provided in this document is necessarily summarized and may not contain all available material information.

Forward-looking statements include those related to any plans for the further exploration of Madini; intercepts appearing to define a NNW-SSE trend; and indications of structure associated with potential wrench faulting.

Although the Company believes the expectations reflected in such forward-looking statements are based on reasonable assumptions, it can give no assurances that its expectations will be achieved. Such assumptions, which may prove incorrect, include the following: (i) that the Company will be successful in its exploration and development plans for the Falea Uranium Project; (ii) that projected low capital expenditures for the Falea Uranium Project will remain unchanged or improve; (iii) that the Company will be able to follow up on the positive results of the gold drill program with additional exploration; (iv) that the Company will be able to complete its planned CSR work as planned and (v) that the price of uranium will remain sufficiently high and the costs of advancing the Company's projects will remain sufficiently low so as to permit GoviEx to implement its business plans in a profitable manner.

Factors that could cause actual results to differ materially from expectations include (i) the inability of the Company to complete follow-up exploration work on Madini; (ii) potential delays due to COVID-19 restrictions; (iii) the failure of the Company's projects, for technical, logistical, labour-relations, or other reasons; (iv) a decrease in the price of uranium below what is necessary to sustain the Company's operations; (v) an increase in the Company's operating costs above what is necessary to sustain its operations; (vi) accidents, labour disputes, or the materialization of similar risks; (vii) a deterioration in capital market conditions that prevents the Company from raising the funds it requires on a timely basis; and (viii) generally, the Company's inability to develop and implement a successful business plan for any reason.

In addition, the factors described or referred to in the section entitled "Risks Factors" in the MD&A for the year ended December 31, 2020, of GoviEx, which is available on the SEDAR website at www.sedar.com, should be reviewed in conjunction with the information found in this news release.

Although GoviEx has attempted to identify important factors that could cause actual results, performance, or achievements to differ materially from those contained in the forward- looking statements, there can be other factors that cause results, performance, or achievements not to be as anticipated, estimated, or intended. There can be no assurance that such information will prove to be accurate or that management's expectations or estimates of future developments, circumstances, or results will materialize. As a result of these risks and uncertainties, no assurance can be given that any events anticipated by the forward-looking information in this news release will transpire or occur, or, if any of them do so, what benefits that GoviEx will derive therefrom. Accordingly, readers should not place undue reliance on forward-looking statements. The forward-looking statements in this news release are made as of the date of this news release, and GoviEx disclaims any intention or obligation to update or revise such information, except as required by applicable law.

To view the source version of this press release, please visit https://www.newsfilecorp.com/release/87065

Sign up to receive news releases by email for GoviEx Uranium Inc. or all companies belonging to the Mining and Metals, Energy Metals industries.