Vancouver, British Columbia--(Newsfile Corp. - January 14, 2021) - First Vanadium Corp. (TSXV: FVAN) (OTCQX: FVANF) (FSE: 1PY) ("First Vanadium" or the "Company") is pleased to announce that it is selectively strengthening its gold portfolio in Nevada by signing an Option Agreement exclusively with Dave Mathewson for a property he has held and planned to drill himself for a number of years in the Battle Mountain - Eureka Gold Trend. The option of the AVP Property will further strengthen Dave Mathewson's position and engagement in First Vanadium Corp. with additional stock in the Company and will spearhead and supervise the exploration on both AVP Property and the Carlin Vanadium-Gold Project.

Paul Cowley, President & CEO states, "We are very pleased to add this high-quality opportunity from Dave Mathewson who obviously has a proven eye for good gold prospects in Nevada. The terms are modest to manage, still allowing us to focus the bulk of our treasury on drilling the Carlin Vanadium-Gold Project. The Company plans to conduct a ground magnetics and gravity survey in early spring on AVP, followed by reverse circulation drilling in 5-10 holes in 1,500m (5,000ft) this summer. Drilling in the 1980's on AVP suggests mineralization remains open in almost all directions and according to Dave Mathewson, may represent the tip of the iceberg."

Mr. Mathewson is a renowned Nevada gold specialist and former Newmont Mining Corporation Regional Exploration Manager. Mr. Mathewson was instrumental in several significant gold discoveries in the Rain and Railroad Mining Districts in the southern portion of the Carlin Gold Trend. During the 1990's while at Newmont, Mr. Mathewson led the team which discovered the Tess, Northwest Rain, Saddle, and South Emigrant gold deposits in the Rain District, which total over 4 million ounces of gold. In 2009, he was a founder of Gold Standard Ventures Corp. (TSX: GSV) (NYSE: GSV) and served as its Vice President of Exploration until 2015. During this period, his exploration team discovered the North Bullion gold, Bald Mountain gold and copper, and Sylvania silver and copper deposits, as well as acquired the Pinion gold deposit, all in the Railroad District.

The AVP claim group, comprised of 40 unpatented lode claims, is located 23 kilometres southwest of Eureka, Nevada, within the southern extension of the Battle Mtn - Eureka Gold Trend and is specifically on the southern extension of the Cortez-Gold Bar Trend. The Battle Mtn - Eureka Gold Trend rivals the Carlin Gold Trend in gold production and prospectivity. Access around the entire AVP Property is easily obtained via existing roads and 2-track trails. The prospect area covers a 3.6 kilometre north-south stretch of the Mahogany range margin which exhibits silicified limestone but much is covered by a generally thin veneer of post-mineral gravel.

Nevada Gold will retain a 3% Net Smelter Return Royalty ("NSR") on any mineral products derived from the AVP Property. First Vanadium will have the right to purchase up to a 2% NSR for US$1.0 million for each 1% NSR prior to commencing commercial production, leaving Nevada Gold with a 1% NSR. The proposed transaction is subject to the acceptance of the TSX-V. 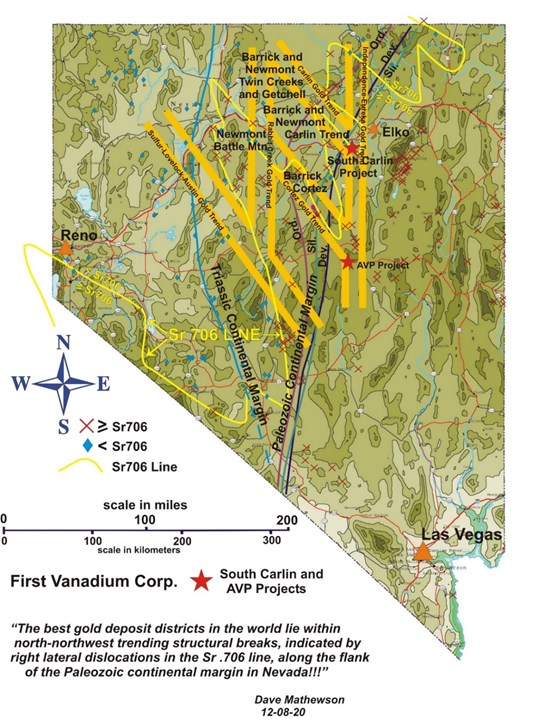 ON BEHALF OF FIRST VANADIUM CORP.

To view the source version of this press release, please visit https://www.newsfilecorp.com/release/72071

Sign up to receive news releases by email for First Vanadium Corp. or all companies belonging to the Mining and Metals, Energy Metals industries.