Vancouver, British Columbia--(Newsfile Corp. - November 26, 2020) - Cross River Ventures Corp. (CSE: CRVC) (FSE: C6R) (the "Company") is pleased to announce that it has further expanded its project holdings in Northwestern Ontario through the acquisition of a series of additional mineral claims (the "Mineral Claims") comprising approximately 4,360 hectares located in the vicinity of the Company's existing McVicar Lake Gold Project, located within the Uchi Subprovince, NW Ontario, Canada.

The new claims merge several CRVC blocks in the McVicar Lake area into one cohesive property and completes the consolidation of the Lang Lake Greenstone Belt. Priority structural targets have now been successfully acquired and the new claim block covers regional first-order fault zones that do not appear to have been previously explored for gold mineralization and also covers a possible "damage zone" south of Lang Lake that represents new structural targets.

The Mineral Claims were acquired from an arms-length third party, pursuant to the terms of a mineral property acquisition agreement, and in consideration the Company has issued 1,000,000 common shares (the "Consideration Shares") and paid $12,000 in cash. The Consideration Shares are subject to an escrow arrangement from which one-quarter will be released four-months-and-one-day following closing and a further one-quarter every ninety days thereafter. No finders' fees or commissions were paid in connection with completion of the acquisition.

The acquisition further enhances the Company's dominant land position within the Archean Lang Lake Greenstone Belt to over 8,000 hectares. The Lang Lake belt is host to at least 10 early stage structurally controlled gold prospects hosted in a variety of rock types and settings (for a review of the known mineral occurrences on the Company's claim blocks, see Assessment Report 52O11 SW 2003).

"The newly consolidated McVicar land position now represents a district-scale gold exploration opportunity," said CEO, Alex Klenman. "Limited historical work confirms the excellent gold endowment in one of the best environments in the world for large, economic gold deposits. McVicar has the appropriate structural architecture and is indeed underexplored in relation to other areas within the productive Uchi Subprovince. The aggregate of all factors, including project location, size, structural geometry, prior work, and a lack thereof, represents a unique and highly attractive gold exploration proposition. We think the upside is clear and we're excited to move the project forward," continued Mr. Klenman 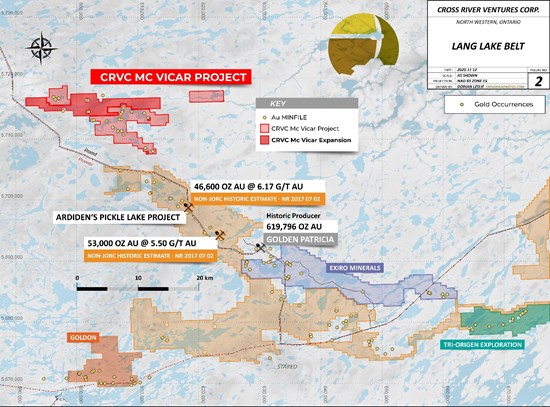 About the McVicar Project

The McVicar Lake claims host the Chellow Vein outcrop, which is a narrow quartz vein that consists of smoky grey to white quartz mineralized with minor pyrite and visible gold. The vein is reported to be hosted within a massive unit of gabbro or mafic metavolcanic rock and is exposed for a strike length of approximately 125 meters and is less than 20cm wide. Limited drill testing below the known showings in the early 1990's didn't yield significant gold assay values, however, the Cross River technical team believe the Chellow Vein is hosted in a much broader (1-2km wide) high-strain or deformation zone characterized by a series of parallel-trending shears that have not been systematically tested.

The Cross River technical team has completed a district-wide structural interpretation of all previous industry and government data sets and believes the key fault trends associated with known surface mineralization remain largely untested. The Company is planning to complete a high-resolution airborne magnetic survey as well as acquire LIDAR imagery in the Spring of 2021 in order to constrain these new structural models. Ground truthing of high priority targets is planned for the Summer of 2021.

The Company also announces that it has engaged Octagon Media Corp. (d/b/a Wall Street Reporter) to provide online marketing, social media, and presentation services for an initial term of four months, with an option to extend. In consideration for the initial term, the Company will complete cash payments totaling US$45,000, and will grant 400,000 incentive stock options exercisable at a price of C$0.50 for a period of twenty four months.

The technical content disclosed in this press release was reviewed and approved by Dr. Rob Carpenter, P.Geo., Ph.D., a Qualified Person as defined under National Instrument 43-101. Historical assay results contained in this press release were not verified by the Company, however, the historical reports referenced were authored by experienced geoscientists and copies of laboratory assay sheets were commonly inserted in the reports.

Cross River is a gold exploration company that is focused on the development of top tier exploration properties in premier mining districts. The Company controls a multiple project portfolio in NW Ontario, Canada, with highly prospective ground in and among prolific, gold bearing greenstone belts. The Company also owns an option to acquire a 100% undivided interest in the Tahsis Property, an early-stage gold exploration property located on Vancouver Island, in the Nanaimo Mining Division, British Columbia. Cross River's common shares trade under the symbol "CRVC" on the CSE.

On behalf of the Board of Directors of

^ Assessment File Report (AFRI 52O11SW9400) from the Ontario Ministry of Northern Development and Mines. Sampling was completed by BHP Minerals Canada Ltd. under the supervision C. J. Waldie in 1993.

^ Samples are selective by nature and may not represent the true grade or style of mineralization across the property.

This news release may contain forward-looking statements. These statements are based on current expectations and assumptions that are subject to risks and uncertainties. Actual results could differ materially because of factors discussed in the management discussion and analysis section of our interim and most recent annual financial statement or other reports and filings with the Canadian Securities Exchange and applicable Canadian securities regulations. We do not assume any obligation to update any forward-looking statements, except as required by applicable laws.

To view the source version of this press release, please visit https://www.newsfilecorp.com/release/69043

Sign up to receive news releases by email for Cross River Ventures Corp. or all companies belonging to the Precious Metals, Mining and Metals industries.