Vancouver, British Columbia--(Newsfile Corp. - November 16, 2020) - CanAlaska Uranium Ltd. (TSXV: CVV) (FSE: DH7N) ("CanAlaska" or the "Company") is preparing for three separate drill programs over the coming months. Two drill programs will be financed by third-party optionees, one of which will be operated by CanAlaska. Separately, the Company has concluded a Canadian flow-through financing to allow drill testing of shallow exploration targets at its Waterbury properties in the infrastructure-rich Eastern Athabasca Basin.

In May the Company completed a $9 million earn-in option agreement with Fjordland Exploration Ltd. for the North Thompson Nickel project (see News Release May 4, 2020). Company staff are currently working with Fjordland and HPX, their main shareholder, to finalize first pass drill testing of a series of near-surface nickel targets. Drill permits have been applied for and final permitting is awaited. CanAlaska is operator of the project for the first two phases of work.

From May to October, CanAlaska increased its landholdings in the NE Wollaston area, located in the Eastern Athabasca, progressively staking a total of 39,211 hectares in five large blocks. The acquisitions focused on large, regional structures similar to those hosting the nearby high-grade Collins Bay-Eagle Point uranium deposits (see News Release May 13, 2020 and (News Release October 13, 2020). The new properties cover defined targets along the interpreted location of the Collins Bay Fault and Maguire Fault structures.

On September 3, 2020 the Company announced an 50% earn-in option agreement with Omineca Mining and Metals Ltd for its Quesnel porphyry copper project (News Release: September 3, 2020). Drill permits for 2,500 metres of drill testing have been received for the project, and work is expected to commence by the end of 2020. The priority target is an 800 metre-long IP chargeability target which straddles the western slopes of Mouse Mountain, 9km east of Quesnel, British Columbia.

CanAlaska has not yet held its exploration program meetings with Cameco Corporation ("Cameco") concerning the 2021 West McArthur project work program, but we are anticipating substantial work in 2021.

Work at the West McArthur project in August focused on a core relogging program. Staff, in conjunction with consultant geologist Mr. David Thomas, reviewed the Grid 5 discovery zone core and additional exploration drill core from sites extending to approximately eight kilometers southwest. These sites are all along the strike continuation of the Fox Lake-Grid 5 conductor corridor. The area has seen limited drill testing to date, but numerous target areas have been defined for future drill testing in addition to the current target zone.

In advance of the 2021 work at West McArthur, the Company is receiving quotes to drill test two separate target areas on its Waterbury project claims. The drill programs are being planned for the first quarter 2021. The targets are near previously drilled holes, which show significant alteration and weak uranium enrichment, in proximity to geophysical targets. 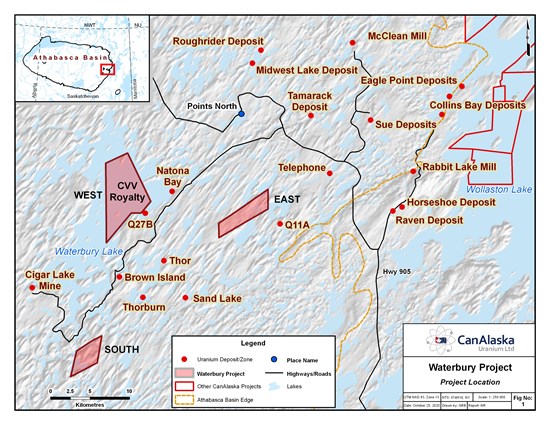 CanAlaska's Waterbury project is situated in the central eastern Athabasca, southeast and northeast of the Cigar Lake mine see Figure 1. The project consists of three claims, two of which are owned 100% by CanAlaska. The Company retains a NSR interest on the Waterbury West claim, which was sold to Cameco and its partner Orano in 2016. A detailed report on the properties is available on the Company's website www.canalaska.com.

The Waterbury East and South claims were staked by CanAlaska in 2005. The East claim received initial drill testing in 2006 and 2007. This drilling identified sandstone and basement alteration, and weak uranium enrichment in the basement.

The most encouraging results to come out of the 2007 drill program were obtained from drill hole WAT005 where 17 metres of basement hosted uranium mineralization returned up to 324 ppm uranium over 0.6 metres in structurally controlled zones of secondary brick-red hydrothermal hematite alteration. WAT005 is interpreted to have overshot the basement conductor.

A recent review of the Waterbury East claim has re-defined the location of the VTEM anomalies in relation to the 2006 and 2007 drilling, providing new drill targets in the vicinity of drill hole WAT005. A new airborne EM survey is planned for the end of this year to complete the coverage of this claim with a more modern and higher quality survey than the 2006 AEM survey.

A compilation of the data on the South Waterbury claim is shown in Figure 2. Two historical drill sections have been completed to date. Historical drill hole (ROO-02-81) had a 40 metre basement section of hematized, clay-altered and chloritized metapelites containing 0.3 metre at 0.12% U3O8. Historical drill hole (SOD-253) targeted the TDEM conductor, but was lost above the unconformity. It intercepted fractured sandstone with drusy quartz and sooty pyrite associated with fault gouge, blocky core and brecciation. 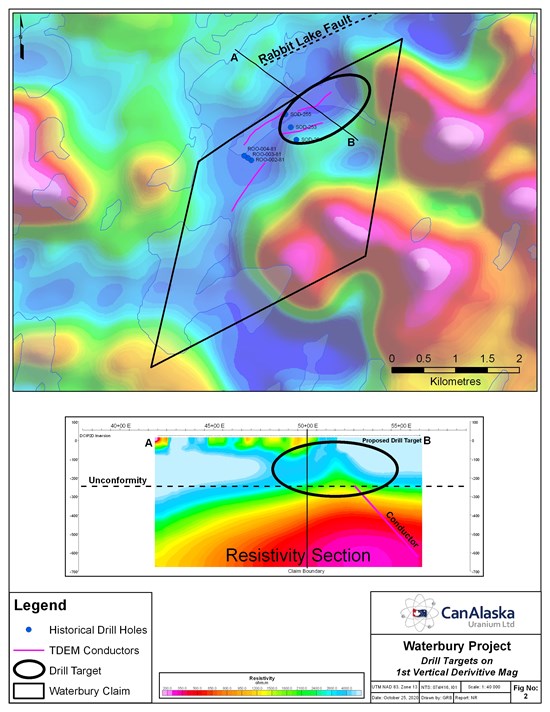 CanAlaska's previous work included a DC-resistivity survey around Cameco drill hole "SOD-253". This survey shows a distinct unconformity breach-style anomaly above the basement conductor mapped by Cameco that was the target of SOD-253, see Figure 2.

President Peter Dasler commented: "We are increasingly seeing bullish projections of uranium price movement from the major participants in the uranium industry. The CanAlaska team has worked hard over the past years to maintain our large Athabasca area project holdings, as well as adding new base metal potential to the mix.

"It now appears as if we are very close to the next stage of growth in the industry, and our team is pleased to share this with our investors. Well over 75% of our recent financing was quickly subscribed by existing shareholders. We are planning for success."

To view the source version of this press release, please visit https://www.newsfilecorp.com/release/68202