This fully-financed program will consist of up to 3,500 metres of drilling in 14 reverse circulation (RC) drillholes across four distinct target areas.

The bulk of the drilling is focused on the newly delineated and yet untested NE Veins target, where eight outcropping veins have been mapped and identified. This target sits atop a large geochemical and geophysical anomaly that was identified during the 2019 field season and is situated near the workings of a historic mercury mine. This represents a compelling target, as the geologic setting shares many similarities to Hecla's Hollister mine, an east-west trending series of veins of which lies 3 kilometres east of the target area. The purpose of this program is to determine whether Silver Cloud represents the western extension of this notable deposit. Drilling is expected to be completed by mid-December, though will be dependent upon the weather.

Andrew Pollard, President & CEO, commented, "This is a campaign that we've been looking forward to since we first identified the outcropping veins and geophysical anomaly at the NE Veins target area during the summer of 2019. Untested targets like this, directly adjacent to a prolific, high-grade system in what is the richest gold mining area in North America, are incredibly rare to just stumble upon. Management has always had unwavering belief in the prospectivity of Silver Cloud, in fact, it's the reason why I joined the Company in the first place, and armed with a plethora of new data, we're excited to bring the most expansive drill program that the project has seen since 2002."

Eleven drill sites have been permitted for the Silver Cloud fall drilling program. Several of the sites will have multiple drillholes completed from the same drill pad. All drillholes will attempt to drill through the volcanic package to intercept the Paleozoic units beneath. The geologic setting is similar to the near-by Hollister mine located 3 kilometres to the east.

Four target areas are the focus for this round of drilling:

The Company completed detailed mapping and reviewed assay and soil geochemistry from the 2019 exploration program. Newly acquired induced polarization data has been reviewed, interpreted and used to target the drill program.

Six drill sites have been permitted to test the outcropping veins, soil geochemical anomalies and geophysical (gravity and IP) targets. The drillholes will pierce the veins down dip near the postulated contact with the Paleozoic basement beneath the volcanics. The geologic setting is similar to the near-by Hollister mine.

Three drill sites have been permitted in the Quiver target to follow up on gold encountered in Newmont drillholes from the 1990s. Drillhole IV90726 encountered 1.782 g/t gold over 1.52 metres. At the time, historic operators were exploring for near-surface oxide open pit deposits, not high-grade veins. Blackrock's drilling will follow up on the known gold intercepts as well as test a gravity anomaly in the area.

One drillhole in the center of the project is targeting the margin of the Silver Cloud graben at the intersection of two prominent structures identified in the gravity survey. 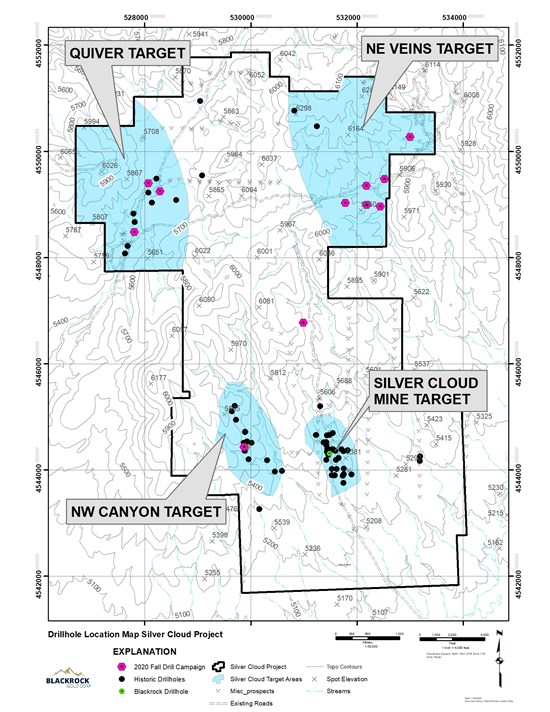 Blackrock's exploration activities at the Silver Cloud Project are being conducted and supervised by Mr. William Howald, Executive Chairman of Blackrock Gold Corp. Mr. William Howald, AIPG Certified Professional Geologist #11041, is a Qualified Person as defined under National Instrument 43-101. He has reviewed and approved the contents of this news release.

This news release contains "forward-looking statements" within the meaning of Canadian securities legislation. Such forward-looking statements concern the Company's strategic plans, completion and exercise of the Tonopah option agreement, timing and expectations for the Company's exploration and drilling programs, estimates of mineralization from drilling, geological information projected from sampling results and the potential quantities and grades of the target zones. Such forward-looking statements or information are based on a number of assumptions, which may prove to be incorrect. Assumptions have been made regarding, among other things: conditions in general economic and financial markets; accuracy of assay results; geological interpretations from drilling results, timing and amount of capital expenditures; performance of available laboratory and other related services; future operating costs; and the historical basis for current estimates of potential quantities and grades of target zones. The actual results could differ materially from those anticipated in these forward-looking statements as a result of the risk factors including: the ability of the Company to complete the Tonopah lease option, the timing and content of work programs; results of exploration activities and development of mineral properties; the interpretation and uncertainties of drilling results and other geological data; receipt, maintenance and security of permits and mineral property titles; environmental and other regulatory risks; project costs overruns or unanticipated costs and expenses; availability of funds; failure to delineate potential quantities and grades of the target zones based on historical data, and general market and industry conditions. Forward-looking statements are based on the expectations and opinions of the Company's management on the date the statements are made. The assumptions used in the preparation of such statements, although considered reasonable at the time of preparation, may prove to be imprecise and, as such, readers are cautioned not to place undue reliance on these forward-looking statements, which speak only as of the date the statements were made. The Company undertakes no obligation to update or revise any forward-looking statements included in this news release if these beliefs, estimates and opinions or other circumstances should change, except as otherwise required by applicable law.

To view the source version of this press release, please visit https://www.newsfilecorp.com/release/67746