The new CARDS evaluation yielded two anomalies about five km SSW of Storboren and along strike. There are several mineral showings adjacent to the strongest new anomaly, T-1. The most significant of these, the Rødalen deposit, is shown below. 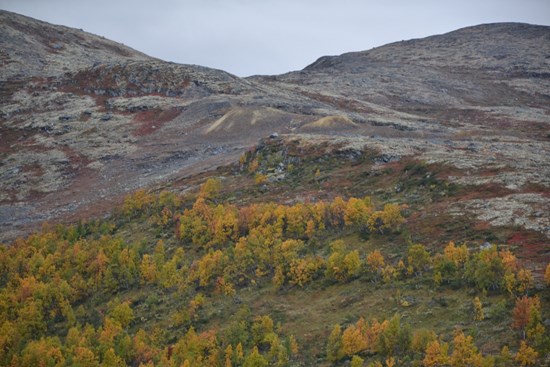 According to the Norwegian Geological Survey (NGU):

"The Rødalen deposit was mined in the period between 1750 to 1810, with further exploration until 1918. About 40 000 t of copper-rich ore was produced. The deposit is hosted by quartzite and thin horizons of amphibolite in generally calcareous biotite mica schist of the Gula group. The mineralization is totally covered by waste, but old reports describe the ore as 1-2 m wide ore zones rich in chalcopyrite and zones of massive pyrite and pyrrhotite."

NGU reports that samples taken from the dump by NGU geologists contained up to 1.81% copper and 0.92 gpt gold. (see Rødalen Deposit Area for details).

Playfair has already carried out preliminary MMI sampling over part of the T-1 anomaly in September 2020. Results are pending.

Fifteen of the twenty-four targets yielded MMI values more than 50 times background in one or more of copper, cobalt, or nickel. At one target, Storboren, a high value of 48,400ppb MMI Cu was reported which according to SGS is "one of the highest recorded values of MMI Cu in a soil".

Follow-up MMI sampling showed the Storboren Copper Anomaly is at least 200m long and 75m wide. It is open to the NW and SE where no MMI samples have been taken. MMI Cu values as high as 53,300ppb were found in the follow-up sampling.

Many historical mines and deposits in this general area have shallow plunges and extend for significant down-plunge lengths, for example Playfair's Vakkerlien nickel-copper deposit is known to extend down a shallow plunge for at least 1,200m.

Playfair Mining's 100% owned RKV copper-cobalt-nickel project currently encompasses 344 square kilometers in a historic mining area about 100 km south of Trondheim by road. Two historic copper mines, Kvikne and Rostvangen, a drilled nickel-copper deposit, Vakkerlien, and over 20 known mineral occurrences mapped and sampled by the Norwegian Geological Survey (NGU) together with an extensive digital database formed the initial impetus for exploration in the area.

There is no green future without minerals. The road to a cleaner environment includes batteries. Batteries use copper, nickel, and cobalt.

To view the source version of this press release, please visit https://www.newsfilecorp.com/release/65929