Roma, Australia-based drilling contractor Silver City, has been selected to drill the Venus-1 well, the Project's first CSG well. The well is planned to be drilled to 400 metres, cased, then drilled out to a total depth of approximately 680 metres, leaving the highly gas saturated Juandah coal seams open and uncased.

Shortly after the Silver City drill rig is demobilized, a Wellpro coil tubing unit will be mobilised and carry out a short-term initial water influx test. After this, about 40 different intervals of highly gas saturated Juandah coal seams (prognoses indicate a total of 26 metres of very gassy coals) will be abrasive jetted. Abrasive jetting is a non-frack coil tubing-deployed reservoir stimulation method, designed to improve water influx and ultimately gas flows from the targeted gassy coals. To compare the before and after stimulation results, a second short-term controlled water influx test will be carried out.

The post-stimulation water influx rate and other data are needed to design production equipment and facilities. Venus-1 will be equipped with a downhole pump, surface facilities and water handling methods as required to carry out a controlled drawdown flow test over several months.

The Venus Pilot drilling and set up is planned for October, with the subsequent production test expected to continue into early 2021. The proposed production test is designed to prove initial gas breakout and increasing gas flows over the controlled draw down period, as required to model and predict future gas flow rates and potentially commercial gas flow rates.

The results of the production test will also be used to either expand the pilot or, if commercial flow rates are achieved, commence an aggressive appraisal program designed to certify sufficient reserves for the Project Venus JV to secure gas sales agreements, allowing commercial field development.

Strata-X is undertaking a non-brokered private placement to sophisticated and institutional investors in Australia of up to 11,666,667 Units ("Units") in the Company at a price of A$0.06 per Unit for gross proceeds of up to A$700,000 ("Placement"). Each Unit consists of one Chess Depository Unit ("CDI") and one half of one option. Each option will be unquoted and exercisable into one CDI at an exercise price of A$0.12 up until 30 September, 2022 ("Option"). Each Placement CDI will represent one common share of Strata-X and will rank equally with existing CDIs. All CDIs issued pursuant to the Placement are to be fully tradable and listed on the ASX, subject to the necessary approvals by the TSX-V and ASX, respectively.

Funds raised from the Placement will be used primarily to fund Strata-X's joint venture share of the CSG pilot well named Venus-1 on Project Venus located within the Surat Basin Walloon CSG fairway, for general working capital purposes and any costs of the Placement.

Strata-X chairman, Ron Prefontaine, has agreed to subscribe (through related entities) for any Placement Units not subscribed for, and has agreed that no fees will be payable in relation to any of his subscriptions. Any subscription by Mr Prefontaine (or his related entities) will be subject to shareholder approval to be sought at the Company's AGM (scheduled for 13 November 2020).

Assuming the Placement is fully subscribed by parties other than Mr Prefontaine (or his related entities), the Placement CDIs and Options will be issued under the Company's existing ASX placement capacity as follows:

Eligible finders may receive a cash fee of up to 6.0% of gross proceeds raised, to be paid in cash.

Completion of the Placement is due on (or before) 7 October 2020, other than any potential participation by Mr Prefontaine, which will require shareholder approval.

Further information in relation to the Placement is contained in the Appendix 3B lodged in conjunction with this announcement.

The 154 km2 Project Venus (Strata-X 50%/Real Energy 50% JV) is located within the Walloon CSG fairway in the Surat Basin. An independent expert has certified, on a best estimate basis, a Prospective Gas Resource of 658 Bcf (694 PJ).(1) Given the location of this tenement immediately adjacent to gas infrastructure and within a proven giant gas fairway, the Venus Project offers the potential to achieve early cash flows.

As announced on 15 July 2020, Strata-X Energy and Real Energy have agreed to merge and rename the merged company Pure Energy. Post -merger, Pure Energy will own 100% of Project Venus.

By order of the Board of Strata-X Energy Limited

This announcement was made in Canada for the TSX.V and in Australia for the ASX.
Public documents for Strata-X Energy Ltd. can be found at SEDAR (Canada) (www.sedar.com) and ASX.com.au (Australia). 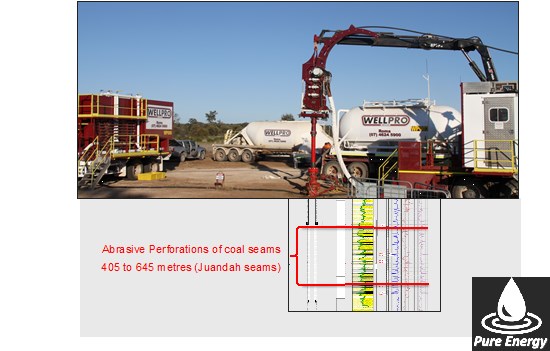 This news release contains forward-looking statements, which relate to future events or future performance, including but not limited to, the completion and size of the Placement, receipt of regulatory approvals and timing thereof, the Corporation's business strategies and plans for the use of such Placement proceeds, capital expenditure programs and estimates relating to timing and costs, and reflect management's current expectations and assumptions, including, but not limited to the timing and receipt of necessary regulatory approvals and third party approvals and completion of the Placement and stability of general economic and financial market conditions.The use of any of the words "anticipate", "continue", "estimate", "expect", 'may", "will", "project", "should", 'believe", and similar expressions is intended to identify forward-looking statements. Such forward-looking statements reflect management's current beliefs and are based on assumptions made by and information currently available to the Company. Readers are cautioned that these forward-looking statements are neither promises nor guarantees, and are subject to risks and uncertainties , including imprecision in estimate capital expenditures and operating expenses, stock market volatility, general economic and business conditions in North America and globally, risks associated with liquidity and capital resource requirements, that may cause future results to differ materially from those expected and the forward-looking statements included in this news release should not be unduly relied upon. See also "Risks Factors" in the Company's Annual Information Form available on SEDAR at www.sedar.com. Those factors are not, and should not be construed as being exhaustive. These forward-looking statements are made as of the date hereof and the Company does not assume any obligation to update or revise them to reflect new events or circumstances save as required under applicable securities legislation. This news release does not constitute an offer to sell securities and the Company is not soliciting an offer to buy securities in any jurisdiction in which such offer, solicitation or sale would be unlawful prior to registration or qualification under the securities laws of such jurisdiction.

ASX disclosure note - 5.28.2 – Prospective Resources - The estimated quantities of petroleum that may potentially be recovered by the application of a future development project(s) relate to undiscovered accumulations. These estimates have both an associated risk of discovery and a risk of development. Further exploration appraisal and evaluation is required to determine the existence of a significant quantity of potentially moveable hydrocarbons.

(1) LR 5.25.1 – The Prospective resources are reported as at 10 December 2019 LR 5.25.2 – The petroleum resources are Prospective Resources in accordance with SPE-PRMS. LR5.25.3 – There are currently no reserves in the permit. Estimates for prospective resources have not been adjusted for development risk LR 5.25.5 – The Prospective resources are reported as 100% - Strata-X’s share is 50%. Gross royalty over Project Venus is 10%.LR 5.25.6 - The prospective resources volumes were obtained by deterministic method, calculating the potentially recoverable portion of the gas-in-place using the overall prospect area, the mapped net coal thickness, raw gas content and coal density, as well as a range of estimates of the gas recovery factor of the coals. The review was carried out in accordance with the standards in the Canadian Oil and Gas Evaluation Handbook as amended from time to time, maintained by the Society of Petroleum Evaluation Engineers. This leads to a Best Estimate of prospective resources in the subject areas of 658 Bcf, a Low Estimate of 526 Bcf, and a High Estimate of 789 Bcf (all numbers are gross 100% volumes). There is no certainty that any portion of the resources will be discovered. If discovered, there is no certainty that it will be commercially viable to produce any portion of the resources. LR 5.28.1 – The Prospective Resources estimate is based on best estimate and low and high estimate. LR 5.28.2 - Cautionary Statement: The estimated quantities of petroleum that may be potentially recovered by the application of a future development project relate to undiscovered accumulations. These estimates have both an associated risk of discovery and a risk of development. Further exploration, appraisal and evaluation are required to determine the existence of a significant quantity of potentially movable hydrocarbons. Prospective Resource assessments in this release were estimated using probabilistic methods in accordance with SPE-PRMS standards. LR 5.35.1 – The Prospective Resources are reported for the area ATP2051 (previously PLR2019-1-11) in the State of Queensland. LR 5.35.2 – The existence of a significant moveable hydrocarbon is determined by the results of previous petroleum wells in and around the permit area and review of seismic data. LR 5.35.3 – The changes of the Prospective Resources being converted to a higher PRMS designation (i.e contingent resource or reserves) is high and there is a high degree of confidence in leading to development status. However, there are the usual risks associated with a gas resource of this type- see Cautionary Statement above. LR 5.35.4 – The estimates were not adjusted for risk. LR 5.41 - The Prospective Gas Resources are prepared by MHA Petroleum Consultants, technical consultancy and business development services for the petroleum industry and Mr Tim L. Hower is the Senior Technical Advisor responsible for the estimates. LR 5.42 - The information contained in this release pertaining to the area ATP2051 Prospective Resources estimates is based on, and fairly represents, information prepared under the supervision of Mr Tim L Hower, Senior Technical Advisor of MHA Petroleum Consultants. Mr Tim L. Hower is a qualified petroleum reserves and resources evaluator within the meaning of the ASX Listing Rules and consents to the inclusion in this release of the prospective resources estimates related information in the form and context in which that information is presented.

To view the source version of this press release, please visit https://www.newsfilecorp.com/release/63830

Sign up to receive news releases by email for Strata-X Energy Ltd. or all companies belonging to the Oil & Gas, Energy industries.