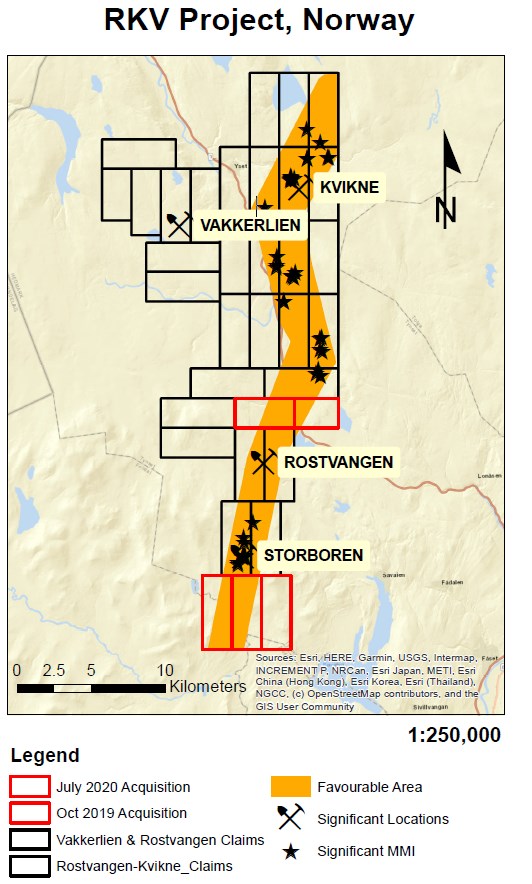 This year's fieldwork started on July 23, 2020 and is making good progress. Fourteen locations, where a total of 33 MMI soil samples taken in 2019 gave values of more than 50 times background in one or more of copper, cobalt, or nickel, are being covered by detailed MMI sampling.

At the Storboren Copper Anomaly, where some of the highest MMI copper values ever recorded in a soil were found (maximum value 53,300 ppb MMI Cu), a series of "base of till" auger samples has already been completed.

Playfair believes that the powerful combination of CARDS AI and MMI geochemistry at RKV has proved exceptionally efficient in discovering new strong targets in an area which has been explored for almost 400 years.

Playfair Mining has now, based on exploration results, twice increased the size of its 100% owned land package at the RKV property in south-central Norway. This large copper-cobalt-nickel project now encompasses 344 square kilometers in a historic mining area about 100 km south of Trondheim by road. Two historic copper mines, Kvikne and Rostvangen, a drilled nickel-copper deposit, Vakkerlien, over 20 known mineral occurrences mapped and sampled by the Norwegian Geological Survey (NGU) and an extensive digital database formed the initial impetus for exploration in the area.

To prioritize areas of the trend for further exploration, Playfair contracted Windfall Geotek to evaluate the project using its proprietary CARDS (Computer Aided Resources Detection System) platform. CARDS uses datamining and pattern recognition to identify targets with a high statistical probability of similarity to known occurrences of economic minerals on the RKV property. At Playfair's RKV project the targets generated by CARDS covered less than 1% of the total area evaluated.

Twenty-four of the CARDS targets were then evaluated by MMI (Mobile Metal Ion) soil geochemistry, a proven advanced geochemical exploration technique known to find mineral deposits. SGS Canada Inc. ("SGS") is the sole provider of MMI technology. Fifteen of the twenty-four targets yielded MMI values more than 50 times background in one ore more of copper, cobalt or nickel. At one target, Storboren, a high value of 48,400 ppb MMI Cu was reported which according to SGS is "one of the highest recorded values of MMI Cu in a soil".

Follow-up MMI sampling showed the Storboren Copper Anomaly is at least 200m long and 75m wide. It is open to the NW and SE where no MMI samples have been taken. Many deposits in this general area have significant plunge lengths and can extend to significant depths. MMI Cu values as high as 53,300ppb were found in the follow-up sampling. The Storboren Copper Anomaly now contains 18 values over 6,000ppb MMI Cu. SGS states, regarding values over 6,000ppb MMI Cu, that: "Many if not all of these are likely to be associated with weathering copper sulphides".

The road to a cleaner environment includes batteries. Batteries use copper, nickel and cobalt.

To view the source version of this press release, please visit https://www.newsfilecorp.com/release/60934