Vancouver, British Columbia--(Newsfile Corp. - July 31, 2020) - Mariner Resources Corp. (CSE: RNR) (the "Company" or "Mariner") is pleased to announce that it has entered into an agreement with Crest Resources Corp., ("Crest"), whereby the Company acquires a 100% undivided interest in the True Grit and Middle Ridge North gold properties in Newfoundland and Labrador.

CEO John Williamson comments, "The acquisition of the Middle Ridge and True Grit Projects, combined with the direct staking of the Great Bend project solidifies Mariner's commanding land position in the southern Exploits Subzone. With meaningful historic intersections of gold over 10's and 100's of metres True Grit is a solid base with which to build resources and explore for new gold discovery associated with the Grub Zone and Dog Bay Line gold systems."

A map of the True Grit and Middle Ridge North properties: 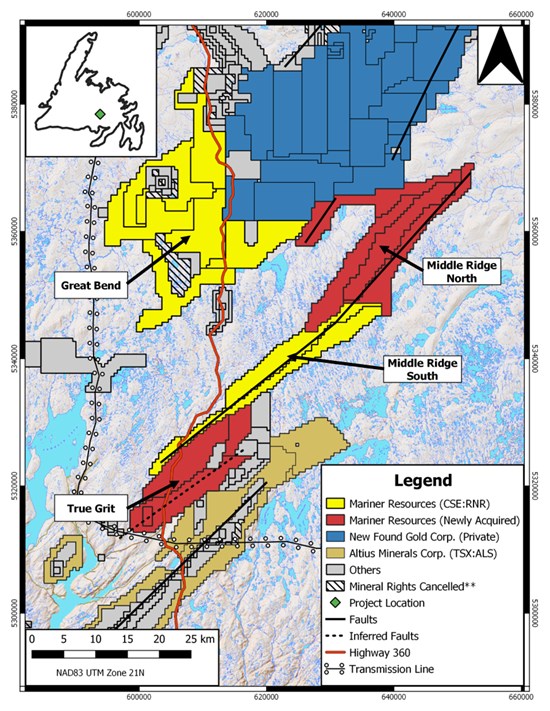 The True Grit property is located in south central Newfoundland and consists of 614 mineral claims covering approximately 153.5 km² (15,350 Ha). The property is accessible by traveling north from the town of Bay d'Espoir on the Bay d'Espoir Highway for 12 km where the highway transects the property. A 3-phase powerline runs 350 meters to the south of the property.

The project lays within the Exploits Sub Zone which is underlain by siliciclastic rocks of the St. Joseph's Cove Group. The St. Joseph's Cove Formation is comprised of siltstone, pelite, sandstone and conglomerate with minor quartz sericite schists thought to represent altered felsic tuffs. Historical till surveys resulted in numerous high gold grain counts (Pickett, 1990) which led to the discovery by Teck Resources of the two True Grit mineralized zones.

The True Grit #1 showing is a 2 m wide zone of quartz-chlorite veining in rusty sericitic and chloritic siltstone with up to 5% disseminated arsenopyrite and minor pyrite. The mineralization appears to exploit brittle fractures in the centre of a small antiformal fold within siltstone. The average grade of channel sampling within the zone is 7.3 g/t Au over 0.69 m over a strike length of approximately 8 m. The highest grade channel sample was 15.6 g/t Au over 1 m from the northern portion of the zone. Grab samples up to 30.2 g/t Au were reported (Pickett, 1990). The showing also lies within a 2.6 km long by 0.8 km wide coincident Au-As-Sb- in-soil anomaly.

The True Grit #2 showing occurs 1.2 km to the south of the True Grit #1 showing. Trenching by Teck Resources in 1990 exposed a 50 m wide by 175 m long zone of gold mineralization grading up to 0.48 g/t Au over 47 m in altered pelites/metaturbidites, with 1-3% disseminated pyrite-pyrrhotite-arsenopyrite and, locally, numerous narrow quartz veinlets. Assay results include 9.8 g/t Au over 1 m, 18 g/t Au over 0.5 m and 6.5 g/t Au over 0.5 m. A grab sample of the arsenopyrite bearing quartz vein assayed 9.6 g/t Au. In 2002, Cornerstone joint ventured the property to Moydow Mines International who carried out several phases of drilling in 2003/2004. The best intersection was obtained in hole TG4, which returned 0.60 g/t Au over 117 m including a 26 m wide section grading 0.83 g/t Au. Intersections ranging from 16 to 46 m wide with grades of 0.45 to 0.75 g/t Au were encountered in holes TG3, 11, 12, 22 and 23. An area of approximately 700 m by 200 m, was drill tested to depths of between 120 and 35 m vertically. Portions of the drilled area have steep isoclinal folding accompanied by arsenopyrite mineralization. True Grit #2 also occurs within the same 2.6 km by 0.8 km gold-arsenic-antimony soil geochemical anomaly which hosts True Grit #1.

Results of the drilling were interpreted to show that there are broad swathes of 0.5 g/t Au material in essentially stratabound packets with a predominantly east or southerly dip. Recommendations by Cornerstone for future work in the area included geochemical and ground/airborne geophysical programs to better define drill targets. The mineralization in the True Grit area is known to be associated with coincident gold-arsenic-antimony in soil anomalies and geophysics may help identify any structural features that may host or control mineralization. Follow-up work also needs to be done in order to source the highly anomalous concentrations of gold.

The Middle Ridge North property is located in central Newfoundland and consists of 1,024 mineral claims covering approximately 256 km² (25,600 Ha). The property is accessible by traveling south from the town of Bishop's Falls on the Bay d'Espoir Highway for 75 km where the property can be accessed by a network of forest service roads.

The property encompasses 40 kilometers of the northernmost end of the Gander River Ultra Mafic Belt (GRUB) offset regional structure, which is thought to be very important in the mobilization and concentration of gold mineralization in the area. The property is 82 km south of the late 2019 New Found Gold Corp. gold discovery, which returned a diamond drill hole with 92.86 g/t Au over 19.0 meters near surface (See New Found Gold Corp. news dated January 28, 2020), and lies within similar geological and structural domains.

The property straddles a significant structure within the Dunnage Zone called the Gander River Ultra Mafic Belt (GRUB), a regional scale trans-compressional thrust fault marked by a discontinuous belt of ophiolitic rocks (O'Neil and Blackwood, 1989) that forms the south easternmost boundary of the Exploits Subzone. The GRUB Line is believed to be a potential conduit for deep seated fluid flow and a pathway for the transportation of gold bearing fluids. This structure is spatially associated with significant gold deposition across the belt focused in secondary and tertiary structural splays from the GRUB Line, which is hosted in the Silurian siliciclastic sediments of the Exploits Subzone. The southern end of the GRUB line offset, trends NE-SW and is mapped by the Newfoundland Geological Survey as being Cambrian to Ordovician submarine mafic to felsic volcanics. Local gabbroic sills are known to intrude all units in the area and may prove as an additional target model as some sills are locally associated with gold occurrences in the region (Evans, 1996). Northwest of the Middle Ridge South property is the Mount Peyton Intrusive Suite, a large Siluro-Devonian batholith and potential heat source, that has intruded the Botwood, Indian Islands, and Davidsville groups. There are numerous fine to medium grained intrusive gabbroic bodies, related to the Mount Peyton Intrusive Suite, that intrude adjacent to the Dog Bay Line (the north westernmost extent of the Exploits Subzone).

Under the terms of the agreement, the Company may acquire a 100-per-cent interest in the properties by issuing an aggregate of 7,000,000 common shares.

A 2.0-per-cent net smelter return royalty (NSR) on license 022031M, (comprised of 18 claims), is due to Stephen and Mark Stockley, of which the Company shall have the right to purchase half (1.0 per cent) for $1-million.

Ian Herbranson, P.Geo, is a consultant for the company and qualified person as defined by National Instrument 43-101. Mr. Herbranson supervised the preparation of the technical information in this news release.

Mariner Resources Corp. is a Canadian mineral exploration company focused on the acquisition and development of mineral projects containing base and precious metals in Canada with its common shares listed on the Canadian Securities Exchange (CSE). The management team has a proven track record of delivering shareholder value during both good and challenging market conditions and have taken projects from exploration, through development, and into production on several continents

To view the source version of this press release, please visit https://www.newsfilecorp.com/release/60887

Sign up to receive news releases by email for Mariner Resources Corp. or all companies belonging to the Mining and Metals industry.