This Device Kills 99.9% of Germs on Phones in 5 Minutes

Seoul, South Korea--(Newsfile Corp. - July 29, 2020) - An innovation team from South Korean company SK Networks has announced the launch of 'Phone Toaster', a phone sanitizer that kills 99.9% of harmful bacteria and viruses on phones in five minutes. 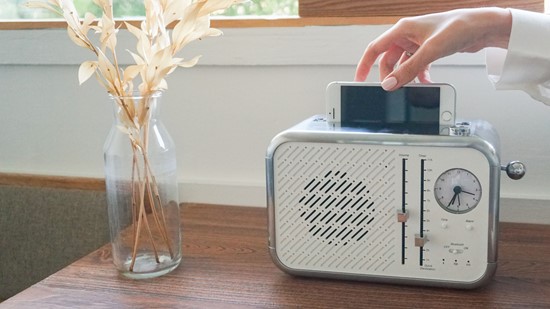 Phone Toaster - The world's first 5-in-1 phone sanitizer that kills 99.9% of germs on phones.

While the benefits of handwashing are well-known, few people sanitize their phones. Given that mobile phones typically harbor 10 times more germs than the average toilet seat, that is a major health concern.

An array of useful features

Phone Toaster's sanitization chamber also features a Qi-compatible 15W fast wireless charger - automatically sanitize and charge at the same time. Its external 18W fast USB-A charger enables charging for a second USB-enabled device, such as a second phone. It also includes a built-in 8W Bluetooth speaker - the first phone sanitizer on the market to do so - and an analog alarm clock with a mood light.

"We wanted to ensure that phone sanitization becomes a daily habit with no fuss," said Bong Ju Lee, a spokesman for Phone Toaster. "Whenever you need a charge, use Phone Toaster to automatically sanitize your phone at the same time."

Several phone sanitizers have launched in recent months, but Phone Toaster is the first in the world to integrate five useful features into a single device.​

"Before settling on Phone Toaster's design and feature lineup, we conducted extensive research to understand customer pain points and preferences. We also crowdsourced elements of its design, to ensure an appropriate aesthetic," Lee said.

Phone Toaster will retail for around USD $130, and very limited pre-orders are available now for as little as $74 on the popular crowdfunding site Kickstarter.

SK Networks is one of South Korea's most established corporations. As a pioneer in ICT innovation, the company has launched a range of products for the modern home and office. It also operates a suite of car rental and car maintenance services and has heritage interests in the global trading of industrial goods such as chemicals, steel and automotive products. SK Networks employs over 2,000 personnel in 18 locations across 10 countries. Cumulative sales in 2019 reached 10.7 billion USD.
Website: sknetworks.co.kr/en/

phone-toaster.jpg
Phone Toaster
The world's first 5-in-1 phone sanitizer that kills 99.9% of germs on phones.

Get Phone Toaster on Kickstarter

To view the source version of this press release, please visit https://www.newsfilecorp.com/release/60741

Sign up to receive news releases by email for SK Networks or all companies belonging to the Technology, Household/Consumer/Cosmetics industries.