Vancouver, British Columbia--(Newsfile Corp. - May 28, 2020) - Xander Resources Inc. (TSXV: XND) ("Xander" or the "Company") is pleased to announce the option of the Senneville Group of Claims Property ("Senneville Group of Claims Property" or the "Property"), contiguous to the North of Probe Metals Val-d'Or East Project, located 20 km North East of Val-d'Or, Quebec. Xander can acquire 100% subject to a 2% net smelter royalty returns in the mineral claims.

Contiguous to Probe Metals recent land package expansion to the South, May 5, 2020 (Probe Metals Press release) The Property is comprised of three complete cells, five partial cells, and one old-style lot, totalling an area of 370 hectares. The northern portion of the property includes a section of the southwest flowing Senneville River. Relief increases away from the river, presenting a plateau of often deep overburden east of the highway, where there are several gravel pits. Although outcrop exposure is limited, it is most abundant west of the highway 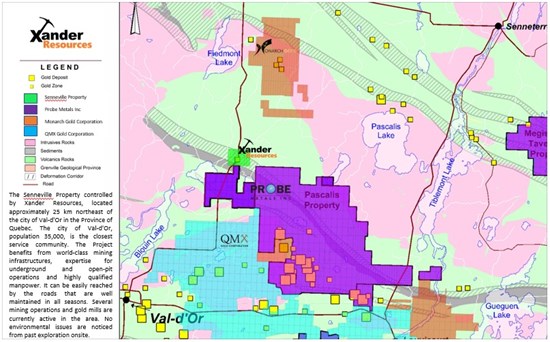 The Property is located in the eastern part of the Abitibi Greenstone Belt, just north of the gold mining centre of Val-d'Or. The southwest corner of the property overlies a small portion of the La Corne Batholith which is composed of quartz monzonite, granodiorite, fine-grained felsic intrusive rocks and is abundantly endowed with lithium-bearing pegmatites. On the Property, the northern limit of this Intrusive is in fault contact with the Garden Island sediments which are primarily wackes, siltstones, and conglomerates. To the north, these sediments are in contact with the Lanaudiere Group which is predominantly basalt and mafic volcaniclastics, within which are narrow units of komatiite, and ultramafic and gabbroic sills. All of these units trend west-northwest and their contacts are usually dextral or reverse dextral faults, with steep dips to the north. Intruded into all of these units are northeast trending Proterozoic Diabase dykes.

Xander Resources CEO, Rodney Ireland, states that, "I am pleased to be entering the historical Val-d'Or area with the first mineral properties for XND. With so many discoveries over the Val-d'Or storied history, new discoveries are still happening within the Val-d'Or area such as Probe Metals recent discovery contiguous to the Senneville Group of Claims Property. We look forward to working on these properties this year."

The Ceré zone was discovered in 1946 and since then has been the target of much of the historic exploration efforts on the property. Many programs also were focussed on base metals. An auriferous zone with an average of 5.5 g/t Au, measuring 37 meters long by 1.63 m wide was defined by surface sampling during several exploration efforts, predominantly in the 1980's.

The mineralization is found within an east-west striking mixed zone of diorite/gabbro/pyroxenite, often containing magnetite porphyroblasts. This zone is located along the contact between volcano sediments and mafic sills. Occasionally within the zone, visible gold is found within chlorite schist and quartz veins bearing small amounts of sulfides.

The Abitibi Greenstone Belt is renowned for its many gold occurrences and gold mines. In any direction from the Senneville Property, both historic and newly recognized occurrences abound. The same Archean greenstones which underlie the Senneville Property are cut off ten km to the northwest by the La Corne Batholith. However, they extend in a sinuous, eastward band almost to the Grenville Front and are endowed all along that trend with gold showings and old mines.

Terrence Coyle, P.Geo. (OGQ #2079), Qualified Person ("QP") as such term is defined by National Instrument 43-101 - Standards of Disclosure for Mineral Projects, has reviewed and approved the geological information reported in this news release.

NOT FOR DISTRIBUTION TO U.S. NEWSWIRE SERVICES OR FOR DISSEMINATION IN THE UNITED STATES.

To view the source version of this press release, please visit https://www.newsfilecorp.com/release/56750

Sign up to receive news releases by email for Xander Resources Inc. or all companies belonging to the Mining and Metals industry.